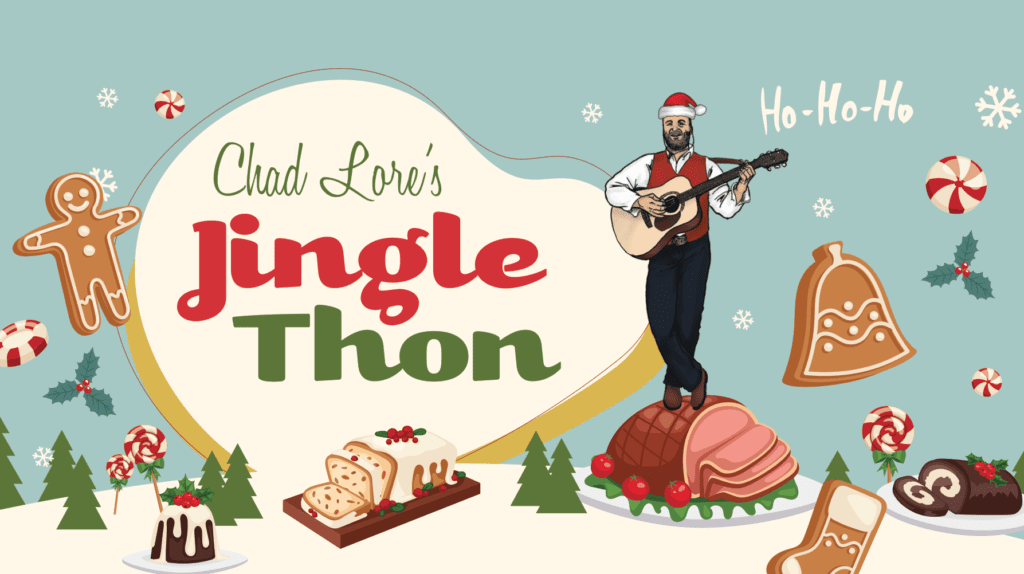 Chad Lore, Oil City and Adbay are teaming up to produce and broadcast JingleThon, a holiday variety show, Tuesday, Dec. 19 from 3:00-6:00 p.m. The program is offered free in-person at Frontier Brewing Company and broadcast live on Facebook to benefit the United Way of Natrona County.

JingleThon is Christmas spirit at its brightest. Now in its second year, the event raises money for the United Way with one of Casper’s favorite entertainers at the helm. Chad Lore, with his unique blend of zany comedy, spirited musical repertoire and lively tap dancing, will host this special production live at Frontier Brewing Company in downtown Casper. He’ll be joined by some of his most talented pals including Sue Morrison, Steve Frame, Pat Stafford, Carolyn Duel, Minister Dan Odell, Backwards Distillery, Sean Ingledew, Red Butte and more. They’ll be performing Christmas classics as well as putting a fresh spin on holiday favorites, sharing food and drink recipes, telling jokes, and with this myriad of crazy geniuses performing live, who knows what else?

“JingleThon is going to be so much fun. We’ve got some really great music and shows planned. Some of the best entertainment in town is contributing, and this is the least we can do for the United Way given how much they do for Casper. And this is all happening live, so anything — all kinds of bands, fire breathers, explosions, lasers, you name it — could happen,” Lore said.

JingleThon is produced in support of the United Way of Natrona County while showcasing Casper’s diverse talents. Donate anytime between now and Tuesday at adbay.com/donate. Those who donate prior to the broadcast can request a shoutout from Lore on air. During the event, bring a new, unwrapped toy, a non-perishable food item or cash to Frontier for donation and receive one free beer or soft drink.

Be warmed by Casper’s generosity and delighted by all the fun by seeing JingleThon live at Frontier Brewing Company or tuning in to facebook.com/oilcitywyo Dec. 19 from 3:00-6:00 p.m. Kids of all ages are encouraged to attend, and beer taps will be available to folks aged 21 and over. Outside food is always welcome at Frontier, but be warned that Chad has been known to ask for samples on air — especially of delicious baked holiday treats.

Frontier Brewing Company is located at 117 E. Second Street in downtown Casper, and donations to the United Way are now being accepted. For more information, call Shawn Houck at 307.259.0287.