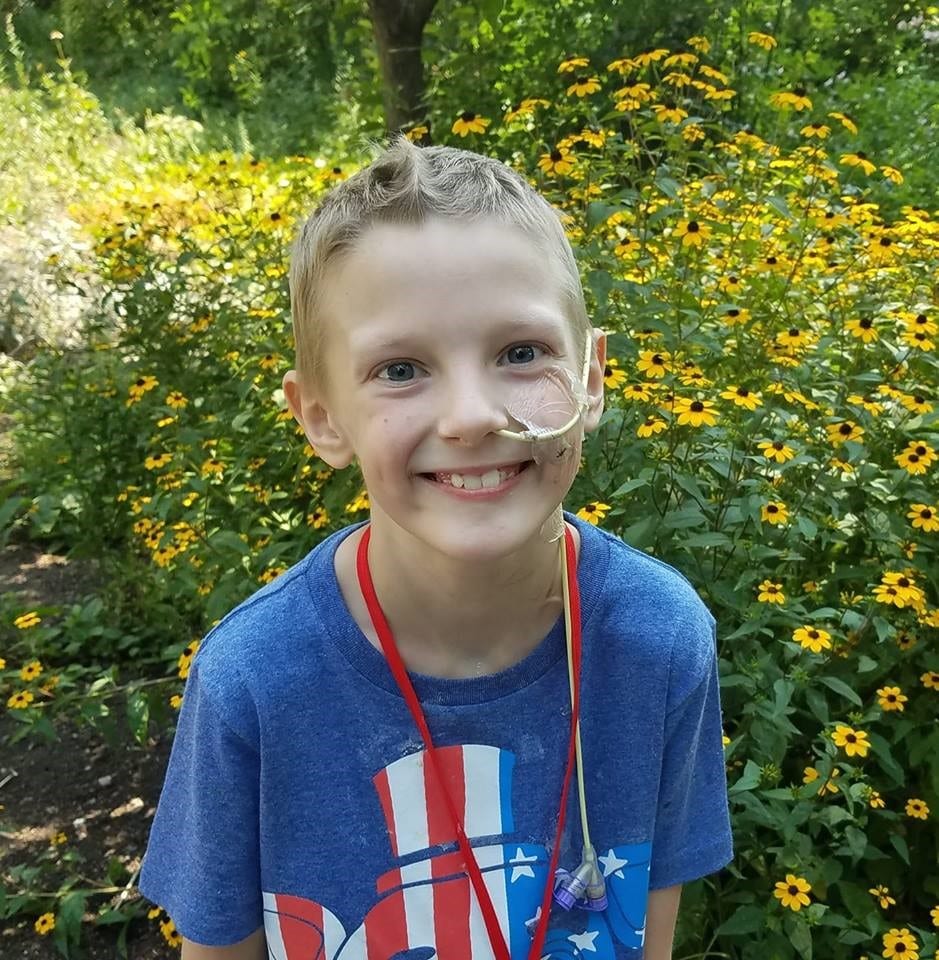 In September 2016, Jessica and Daniel Fritz sat down and listened as a doctor said four words that would change their lives forever – “Your child has cancer.”

Jessica knew that something was wrong with their then six-year-old son Triton when, less than a week earlier, his skin began taking on a yellow tint. Fearing that there could be something wrong with his liver, Jessica brought him to the hospital to get his blood tested. Upon seeing the test results, their family doctor in Riverton knew something was wrong and told the Fritz family to take Triton to Primary Children’s Hospital in Salt Lake City, Utah.

It was there that they learned that their blue-eyed boy had Rhabdomyosarcoma (RMS), a rare soft cell cancer that had attacked his liver. At the time, Triton was only the third child on record to have RMS form a tumor in this particular location. Triton immediately began chemotherapy treatments and underwent 27 rounds of radiation in the year following his diagnosis.

Triton endured numerous treatments and underwent an exploratory surgery to see if the doctors could perform a liver transplant and remove and replace part of Triton’s pancreas. The doctors in Salt Lake City explained that there was nothing they could do.

“He just had so much life in him, so the idea of sitting there and letting the cancer take over his body was just too horrifying,” said Jessica. “When you know your kid is potentially dying, it breaks something in you. But it also makes you more determined and more intent on helping your kid fight the fight.”

Triton and his family did keep fighting. The Fritz family scoured the country to find a doctor who would be willing and able to perform the procedure. They found one at Georgetown University Hospital and, in November of 2018, they traveled to Washington, D.C., to check Triton into the hospital.

Waiting for a Miracle

In between weekly chemo treatments at Georgetown, Jessica and Daniel tried to give Triton every opportunity to enjoy just being an eight-year-old boy. From creating colorful art projects to decorating Valentine’s Day cupcakes and meeting a real astronaut, the family tried to keep Triton’s spirits up.

“Some days you are helping your kids be kids, and some days you are talking about heaven as if it’s just a room next door and that death is nothing to be scared of,” said Jessica. “As parents, we have to do our best to support our kids.”

On February 24, 2019, Triton and his family received the news that they had spent months waiting for – Triton had a match. The next morning, Triton was wheeled into the operating room to receive a new liver and have part of his pancreas removed – a procedure that had never been done with such a rare tumor. The surgery was successful, and Triton recovered incredibly fast. Three days after the operation, Triton was walking and, in early April, the family was able to return to Wyoming.

Looking back, Jessica explains that for the last three years, her family has been in “survival mode” – trying to survive physically as well as financially.

Six months into Triton’s treatments, expenses were quickly piling up. With all of the back and forth trips out of state and the cost of lodging, the Fritz family had maxed out their credit cards and were buried under bills. They had sold what they could, but with three other children back home, Jessica and Daniel started to wonder how they were going to keep going.

“I didn’t know what we were going to do. We couldn’t afford anything with all the back and forth trips, and I was worried we were going to end up homeless,” said Jessica. “It’s a horrible thought that your kid could die because you don’t have enough money to get them where they need to be.”

“In all honesty, I don’t know where we would be without the help from Jason’s Friends,” said Jessica. “But I know we would have lost our home and much more if they hadn’t stepped in.”

This year, the 22nd annual event will take place on March 7 at El Mark-O Lanes in Casper. Bowlers put together five-person teams, sign up for a one-hour bowling time slot and collect donations prior to bowling. There are prizes available for those who bring in the most donations and a free t-shirt for every bowler who collects at least $75.

After returning home from D.C., Triton had weekly chemotherapy appointments in Salt Lake City for six months. Today his scans do not indicate any signs of disease but, because Triton’s chances of developing a secondary type cancer are so high, he will continue to undergo tests and scans every three months for the next three or four years.

In between trips to Salt Lake City, Triton is busy doing the things that normal nine-year-olds do. He is back in school and enjoys playing outside – when the Wyoming weather permits.  Inside the house, he loves arts and crafts, playing board games with his family and shooting off nurf guns with his brother.

“While we still have micro-heart attacks every time he gets a stomach ache, we are trying to take life one day a time,” said Jessica. “We don’t try to look ahead, and we don’t live in the past. Triton is breathing and alive, so we are good.”

Despite the Fritz’s conscious effort to live in the moment, Jessica can’t help but look to a big day coming up in June.

“Triton’s 10th birthday is on June 11th,” Jessica explained. “His doctors didn’t think he would make it to his 9th birthday.”

The Fritz family also looks forward to the year that they can all come to Casper to attend Bowl for Jason’s Friends. In the meantime, Jessica urges her fellow Wyomingites to show their support for the event and for families like theirs.

“I encourage everyone to help out in any way they can,” said Jessica. “Jason’s Friends has been an absolute godsend, there’s no other way to describe it.”