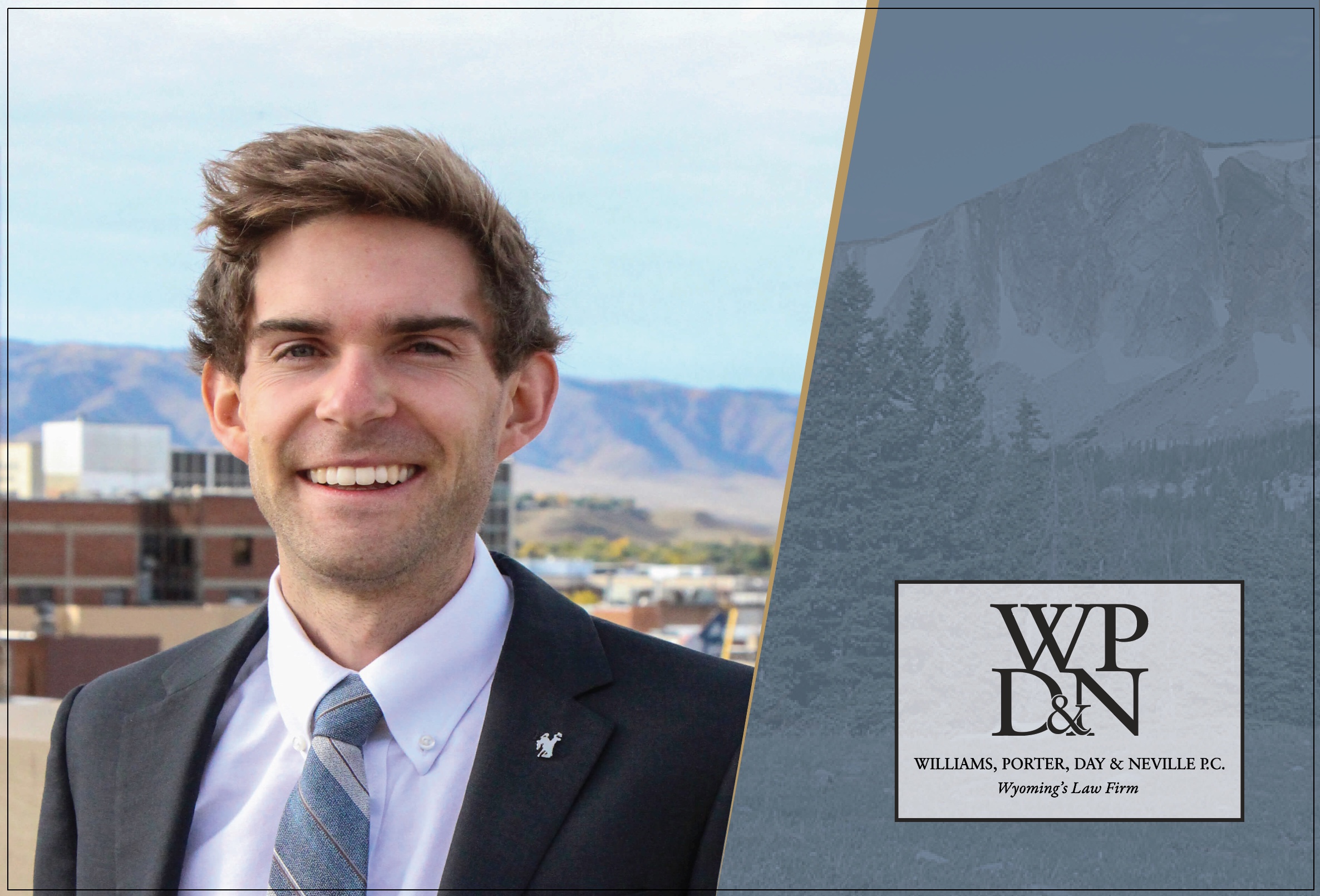 Joseph Rubino, associate attorney with Williams, Porter, Day & Neville, is the epitome of “learning by doing.”

Rubino graduated with honors from the University of Wyoming College of Law in 2021. A few months later, he was working for WPDN.

“I’ve been very fortunate to land with Williams, Porter, Day & Neville,” Rubino stated. “I’m one of the youngest people here, if not the youngest person here, and they’ve all just sort of taken me under their wing. I’ve already learned more here in my first three months than I did in three years of law school.”

Rubino is learning on the job, but that’s not to say he didn’t learn a lot at UW. In fact, The University of Wyoming is where he really discovered his passion for natural resources law.

“I was not interested in science or anything like that growing up, but I was interested in the natural resources that make everyone’s lives better including the people of Wyoming,” Rubino said. “That’s what drew me to water and oil and gas. I majored in economics, and I took a history of oil class when I was a senior in undergrad at UW. It was taught by a lawyer by the name of Phil Roberts. He was an incredible teacher and an incredible driving force behind my applying to law school. Phil encouraged me to apply to law school and continue my studies there.”

So he did. In addition to his schooling, Rubino also interned with the Wyoming Oil and Gas Conservation Commission between his first and second year of law school. That’s where he first met WPDN attorneys Tom and Will Reese.

“My aunt Harriet Hageman was an incredible force in driving me toward natural resource law,” Rubino shared. “She was a water attorney in Cheyenne, and I got to learn my very first lessons in water law and property rights from her before I even went to school. When I went to law school, I thought I wanted to be a water attorney like her. I had wonderful professors in water law and oil and gas law, and when the door opened up to intern at the Wyoming Oil and Gas Commission, I jumped on it. From there, I met Tom and Will Reese, who were incredible to watch at the WOGCC hearings, and I knew from their reputation that they were the best of the best in oil and gas. That’s what drove me to intern for them.”

After his first internship with the WOGCC, Rubino went back to school, but he kept in contact with Tom Reese. Reese saw something in the young man and took that to the partners of WPDN.

“As I was finishing up with the Oil and Gas Commission, Tom and I started communicating and that led to an internship [at WPDN] between my second and third year of law school,” Rubino said. “From then on, I was fortunate enough that, after my internship, they decided to keep me on. I’ve learned a ton from Tom and Will; that’s sort of where I come from, the oil and gas stuff. But everybody else has an open-door policy. And everybody here is just the best at what they do in their own respective fields, whether it’s oil and gas or whether it’s insurance or medical malpractice.”

Rubino said it’s that open-door policy that really made an impact on him during his first few days with WPDN. As a recent graduate of law school, he was still in “student-mode,” always asking questions, always taking notes, always studying how to be the best possible attorney he could be.

And he has good teachers.

“Frank Neville told me when I first started that ‘there’s no such thing as a bad question, except for the question that you don’t ask,’” Rubino shared. “That’s really been the truth of it. When I run into something that I don’t know how to do, or something I just want a second set of eyes on, everyone’s door is always open. And that’s really quite an amazing thing, that there’s 20+ attorneys here and I feel comfortable talking to and asking questions of every single one of them. The amount of resources we have at WPDN is amazing.”

Rubino believes it’s the attorneys of WPDN, their knowledge and experience, that separates the firm from any other in Wyoming.

“There’s just a desire to help people and to continue to learn,” he said of WPDN. “It’s everybody collaborating with each other. And that’s a unique thing, especially in Wyoming, to have 20 or so attorneys that are able to collaborate and go forward. If one person knows something that another doesn’t, everyone is really good about acting as a resource for each other. And I think that’s one of the things that really benefits clients and makes people look to WPDN as one of the premiere firms in the state and beyond.”

Rubino, fresh out of law school, is just beginning his career at WPDN. He will undoubtedly tend to countless cases on his own, but for now he’s content helping other WPDN attorneys as he learns the ropes. He gets to broaden his horizons and learn more about the various services that WPDN provides, from commercial and construction law to professional liability, transportation and logistics, family law and so much more.

“I’ve got a lot of family that are attorneys,” Rubino said. “And everybody said that this is a lifelong learning profession. The learning doesn’t stop here; it continues for the rest of your life. My big goal right now is to continue learning because there’s a lot for me to learn about different topics, different fields, different practice areas, and different people.”

It’s the people, Rubino says, that are the most important aspect of the job. People are what make WPDN the firm that it is — and it is people that will, in fact, teach him the most.

“The biggest, most overarching thing that I’ve learned out of law school, through clinics and internships and externships and everything in between, is that you can’t always learn something from out of a book,” he said. “The best way to learn is by going out and communicating with people, learning by doing and actually doing the job instead of just reading about it. That’s something I didn’t necessarily learn in law school, but I definitely picked it up along the way and it’s what has led to, already, a very meaningful experience in the beginning stages of my legal career at Williams, Porter, Day & Neville.”

PAID FOR BY WILLIAMS, PORTER, DAY, AND NEVIELLE: WYOMING’S LAW FIRM
This article is a promoted post. The views, thoughts, and opinions expressed in the text belong solely to the organization that paid for the article, and do not necessarily reflect the views, thoughts or opinions of Oil City News, its employees or its publisher. Please fill out this form if you would like to speak to our sales department about advertising opportunities on Oil City News.