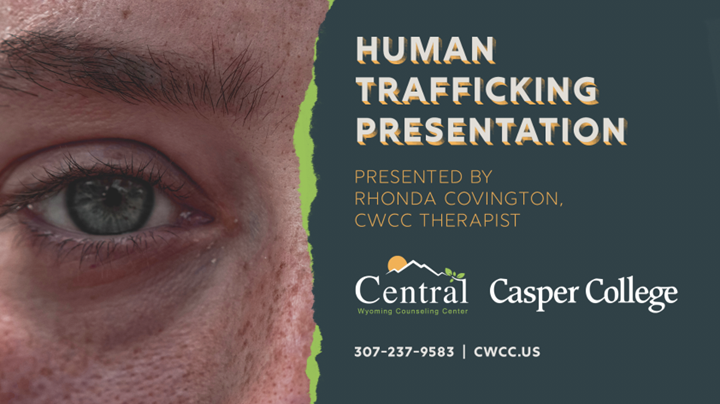 It’s been reported that an estimated 40 million people worldwide are victims of trafficking and exploitation.

20% of those victims are children.

For these reasons and many more, it’s important to spread awareness about the issue of human trafficking. That’s exactly why Casper College and the Central Wyoming Counseling Center partnered together to offer a presentation on the subject at the Casper College Wellness Conference, which took place April 28–29, 2022.

On Thursday, April 28, Rhonda Covington, a CWCC therapist and a certified trainer with Love146, offered a presentation on human trafficking at the Gateway Building on the Casper College Campus.

Love146 is an organization dedicated to ending child trafficking and exploitation, and it offers various training courses for people who are interested in raising awareness.

Covington is one of those people.

“The course is designed by an organization called ‘Not a Number,’” Covington stated. “Love146 is their top-level organizational name, and the ‘Not a Number’ aspect ties into the human trafficking piece because their philosophy is that individuals are more than just a number.”

But when it comes to things like human trafficking, using statistics is the fastest, and easiest, way to get a point across. Phrases like ‘An estimated 40 million’ or ‘20%’ detail just how many people are impacted by human trafficking. What we sometimes forget are the names, the people, the lives that make up those numbers.”

“When we think of human trafficking, we get that picture in our head of this unmarked white van where a guy will reach out and snag kids off the street or whatever,” Covington stated. “But human trafficking is so much more. There’s the labor trafficking aspect of it, as well as the commercial sex standpoint; and just how the vulnerabilities that everybody has makes us susceptible to one or both of these, or even just exploitation in general.”

So, what are some of those vulnerabilities?

“Adolescence is a huge vulnerability,” Covington revealed. “If a kid comes from the system or has a history of abuse or neglect, or low self-esteem or loneliness, that’s a vulnerability. You also get a lot of kids today who are questioning their sexuality, and that makes them a very big target. So does homelessness, addiction, bullying, gang activity — even just being part of any marginalized population.”

Covington said there are many different warning signs that somebody is either being trafficked or is susceptible to being trafficked. These signs can present themselves in a number of ways, from sudden shifts in mood to being secretive about who they’re speaking to, to isolation, receiving unexpected gifts, and more.

“Somebody’s there just building them up and feeding them all sorts of things so that they can sink their hooks in,” Covington said.

Typically, she offered, the age range of those who are more prone to being trafficked is adolescence to early adulthood.

“That’s just one of those vulnerabilities that makes that particular age group a target,” Covington stated. “Because they’re just wanting to fit in; they’re wanting to find their niche in the world. And so they’re willing to just do whatever. They act a lot on those empty promises because they don’t know any better.”

Covington said that it’s even easier these days for young people to be swept up in the world of human trafficking, because social media has provided easy ways for strangers to communicate with children. Social media apps like Snapchat and TikTok connect adolescents with a world far beyond their bedroom, their home, even their city or state.

“The point to make is that it’s very unusual in this day and age to find the old-fashioned family structure, where the dad was the breadwinner and the mom stayed home,” Covington said. “That’s not common anymore. Most typically, both parents work, and so the kids spend a fair amount of time by themselves. And what do they do when they’re by themselves? They’re online.”

All of those reasons are why the Central Wyoming Counseling Center partnered with Casper College to put this presentation on. It was designed to open up the conversation about a topic that seems like it could never happen. But it does, far too often — even in Wyoming.

Covington said that she thinks “this subject is really important to our community because a lot of times, even I had the misconception that, ‘Hey, this is Wyoming. This kind of stuff doesn’t happen here. This is something that happens in the bigger cities, like Denver and Chicago, those types of places.’ But when you really start boiling it down and seeing exactly what human trafficking is and what it entails, Wyoming is extremely vulnerable.”

And why is that? Why is Wyoming more susceptible to human trafficking, maybe even more so than bigger cities?

“I think because we are a rural community, a lot of kids jump at the opportunity to get out of here and go see the world,” Covington said.

And sometimes, they will jump without looking at where they could possibly land.

Human trafficking can, and has, happened in Wyoming and it’s important to know what we’re actually supposed to be looking for when it comes to this subject. That’s what the CWCC presentation at Casper College focused on.

“We talked about exactly what human trafficking is, and broke it down,” Covington offered. “We learned about the differences between labor trafficking and commercial sex trafficking. We looked at defining the terms, keying in on the ideas of force fraud and coercion. We looked at what it means to consent. What does grooming mean? What is child labor exploitation and how does that tie into our child labor laws? We also discussed resources that we have. How do we get our youth help? How do we recognize the signs that we’re supposed to be looking for? We also focused on safety planning. What do we do with it? Where do we go with it?”

It’s an important subject and it’s a conversation that was long overdue. This was a chance for Wyomingites to be a part of the discussion, to learn about human trafficking and to help prevent human beings from becoming mere numbers.

If you didn’t have the chance to attend the conference, or if you did and are just seeking more information about the various services that the Central Wyoming Counseling Center offers (such as addiction services, inpatient and outpatient therapy, crisis resources, and more), visit their website or call 307-237-9583.

PAID FOR BY CENTRAL WYOMING COUNCILING CENTER
This article is a promoted post. The views, thoughts, and opinions expressed in the text belong solely to the organization that paid for the article, and do not necessarily reflect the views, thoughts or opinions of Oil City News, its employees or its publisher. Please fill out this form if you would like to speak to our sales department about advertising opportunities on Oil City News.