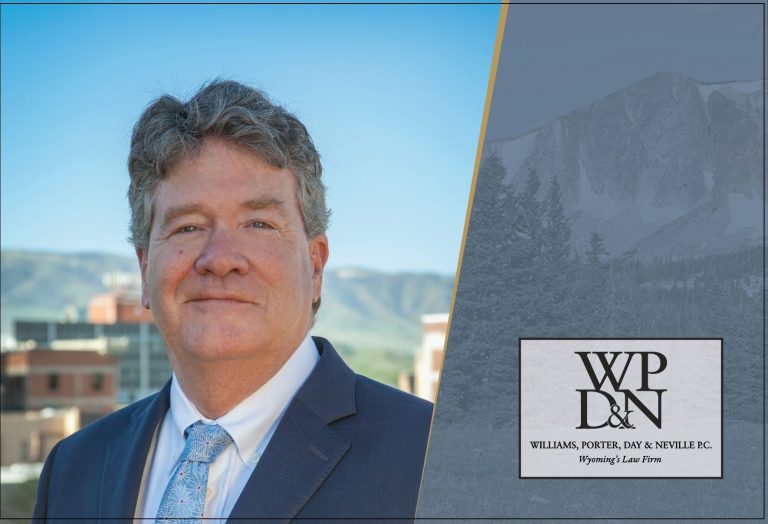 Shadows. Many of us walk in the shadows of our fathers. It starts when we’re kids, walking hand in hand with our dads through a park, while the sun is beginning to set. We don’t see it at first, but then we notice. “Wow!” we think to ourselves. “Look at our shadows. His is so much bigger than mine.” We continue walking, but that’s the first time we begin walking in our father’s shadow, noticing how much it towers over us.

For Stuart, though, that wasn’t a bad thing; his dad was the best attorney, and the best man, that he knew. In fact, it was watching his father day after day, year after year, that eventually led Stuart to become an attorney himself.

“My father, Dick Day, in the Williams, Porter, Day, and Neville world, was the first Day to be a part of the firm,” Stuart stated. “So I kind of grew up with the law firm. From the time that I was 6 years old, my father was a part of the firm, so I would go down to the office with him and as I grew and worked on different school projects that had to do with the law, I would use the WPDN law library. I would hang out with the partners. It was always a very familiar place to me.”

Day said that he knew he wanted to be an attorney for as long as he can remember.

“When you’re a little kid, you laugh about being an athlete, like a pro football player, or being an astronaut,” he said. “But once I started to think about what it was that I wanted to do, even as far back as grade school, I just wanted to do what he did.”

Day was the third generation of his family to graduate from Natrona County High School. After that, he graduated from Arizona State University in 1981, and then earned his J.D. from the University of Wyoming College of Law in 1984. Four days after taking the bar exam, he began working for WPDN.

“It was a plan and it all laid out the way I had hoped it would,” Day said. “And then I started at WPDN and have been here ever since.”

Day said that he was almost immediately accepted by everybody, because he literally grew up with many of the other attorneys after meeting them at firm picnics and other events. But this was more than a case of being nice to him because his dad was the boss. Stuart Day earned his place at the right hand of his father.

In his time with WPDN, Day wore many hats and tried many different cases. He worked as a bank attorney, handling bank loans, repossessions, foreclosures, and more. Following that, he worked as a personal injury and oilfield attorney. For 10 years, Day worked as the outside council for the Natrona County School District.

But he missed the excitement and the pressure that comes with litigation. He missed the thrill of a trial, so now he works primarily in personal injury litigation, as well as business litigation and other forms of trial work.

“I like helping people to be able to express their various positions with regards to legal issues,” Day said. “I think it’s challenging to be able to talk to a jury and to witnesses. One of the things I like best about my job is that I get to learn something every day. A lot of the cases that I’m involved in, I don’t necessarily have a significant level of expertise in, but I get to learn about the case and learn about my witnesses so that I can effectively present their stories and positions to judges and juries.”

Throughout his career, Day was even able to try some cases with a very important partner.

“I was very fortunate to be able to try three cases with my father,” Day said. “We worked on others together, but there were three of them that went to trial and those are some of my fondest memories of practice; not just seeing my father in trial and being able to be there with him, but also seeing the way he interacted with the other attorneys, with his client, with the other parties. It all taught me a lesson about what I think is the best way to approach the practice of law.”

So, what is that approach?

“I think with respect,” Day revealed. “With respect for all parties and with zeal to present your client’s position in a way that puts them in the most favorable light for a judge or jury.”

Another lesson Day learned from his father is that attorneys on opposite sides don’t have to extend the battleground outside of the courthouse. What happens in court can stay in court.

“One of the things I liked most about traveling with my father — and it’s one of the things I like about being a Wyoming lawyer — is that we can have significant disputes during the day when we’re working on the case, but when we’re not working on the case, there’s an ability to treat our opponent with the respect they’re entitled to,” Day said. “We could even develop friendships. One of my father’s fiercest rivals was also the person who volunteered his property in Jackson to hold my sister’s wedding.”

Father, son, and daughter practice law with a respect for the profession and a respect for others. They value human dignity. That’s something that the entirety of Williams, Porter, Day, and Neville can claim.

“We’ve meshed a good practice with good lawyers who are good people and who understand what’s most important at the end of the day, and who always try and advance toward that goal,” Day said. “I think the idea of integrity is doing what you say you’re going to do. It doesn’t need to be written in a letter in order for it to be a promise.”

He made his daughter, Erica, that very same promise — and it’s not a promise that he intends on breaking.

“It’s funny, because one of the things that I think made my father happiest shortly before he passed away was being able to go to the swearing-in ceremony of Erica,” Day said. “Having the three of us there together, all as attorneys, all in the same firm, three generations; that was really special for him.”

It was special for Erica as well. And for Stuart. That was a moment none of them will ever forget.

His father and his daughter are two of the people that Stuart cares about most. His father passed away in 2014, but Dick Day’s essence, his legacy, still permeates through the halls of WPDN. So, what would father say to son if he were still here?

“If I could tell Erica one thing, it would be this,” he said. “You are well on your way to becoming a lawyer…no, you have already become a lawyer that your grandfather and I are proud of, and we look forward to seeing you blossom in your practice.”

When Stuart looks at his daughter, he does so with the same sense of pride that his father looked at him with.

At one point, as a child, maybe his dad’s shadow towered over him, but when Stuart Day became an attorney at WPDN, he wasn’t walking in his father’s shadow. He wasn’t standing behind Dick Day; they were standing side by side.

“When he passed away, I moved into his office,” Day said. “So, I get to think about him virtually every day. And I get to wonder, ‘How would he approach this situation? What value could he bring to this circumstance?’ He is always kind of a guiding light.”