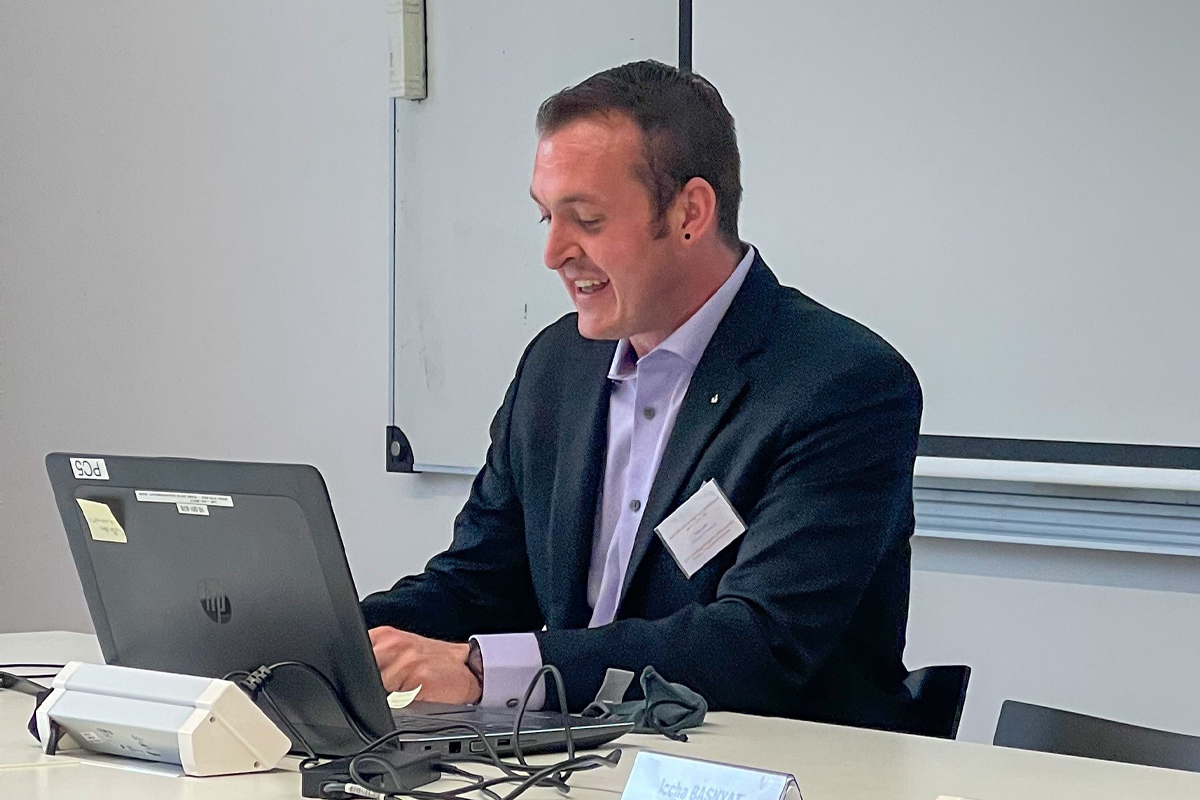 A recent University of Wyoming at Casper graduate, Dillon Reed, took his passion for communications across the pond to Paris, France, for the 72nd Annual International Communications Conference on Digital Health Communication in late May. Reed was selected to present a research paper at this esteemed conference that he had collaborated on with Assistant Professor of Communications Dr. Li Li.

This research paper has been a long time coming. With University of Wyoming at Casper’s flexible online options, Reed was able to finish his Bachelor’s in Communication degree after relocating with his wife and three kids down to Lantana, Texas. After growing up in Casper, Reed was surprised to discover just how many people wore masks during the COVID-19 pandemic in the Dallas-Fort Worth metro area.

Reed shared, “I was like, ‘Why is it so different here?’ Why, in a state that I assumed was very much like Wyoming and, in a lot of ways, it is. I figured they’d all have their middle fingers in the air, you know, like ‘We’re not wearing a mask.’ But everybody was doing it.”

This inspired his research. Research that started as an independent study he was working on concurrently at UW at Casper, and ended up opening doors for him internationally.

“So then that led into my curiosity, which was, ‘What are people talking about?’ I only had the narrative of Wyoming,” Reed said.

Social media seemed like the perfect platform for him to gather information for his paper. The anonymous social media platform Reddit became Reed’s primary source for his research.

“I wanted to know what the overarching conversation was nationally. And the only way I could do that was to do some ethnographic research on the internet. So I picked Reddit, because it’s anonymous,” he said.

A large portion of this research project relied on asking the right questions and conducting extensive research and data collection. Even though Reed collected and managed the overall research paper, Dr. Li held an essential role.

“I came up with the research questions and basically the whole entire methodology for how we were gonna do the research. Dr. Li didn’t come in until once I’d collected all the data. We had to code the data because it was more qualitative and then it became quantitative. So we did have to work together to code all of the different units of measurement,” Reed shared.

Reed spent a significant amount of time searching for the keyword “mask” on Reddit and used Reddit’s filter options to find what was important in the public’s eyes. This allowed them to see what the overarching thoughts and opinions were from people all across the country.

He shared, “Sometimes it was useful, sometimes it was garbage. I mean, ’cause trolls would post and then other trolls on the internet decided to like the troll’s post. The next thing you know, the top comment is just someone being a total jerk to somebody.”

It took Reed about a month and a half to collect and sort all the data. Once that was complete, Reed and Dr. Li collaborated to code all of it. They also utilized Gastil and Black’s “Key Features of Deliberative Conversation and Discussion,” which had different metrics that they used to judge each communicative event.

“Basically what we were trying to figure out was were people communicating in a way that helped guide the narrative — pro or against mask wearing — or were people kind of just being jerks, and we found out people were just kind of being jerks. Unfortunately, you know, there wasn’t a whole lot of conversation back and forth,” Reed stated.

As a communication major, the lack of communication between people of differing views was frustrating for him to analyze. Despite this, being impartial was an essential aspect of this project.

“The whole goal of it was to objectively observe what everyone’s take was on it. And it was really just mind blowing,” he said.

After Reed told his wife, she told him there was no way he could pass on that opportunity.

“She said, ‘People don’t get to do that. Like, you don’t get to say no. Whether we’re putting this on credit cards or whatever it takes to get you to France, you’re going,” he shared.

And so he went. Being selected to present in front of internationally renowned authors is an opportunity Reed does not take lightly. Along with presenting, Reed was also able to see the keynote speakers at the conference.

“They would talk about how doctors communicate with patients. A lot of it was organizational and institutional health communication and because of COVID, it would be about how a certain government handled social media usage during COVID and how they presented information.”

He did note some irony the day before he presented at ICC.

“The keynote speakers were talking about a lot of the issues that Li and I’s paper addressed and how we needed to look into it. … Then I’m like, ‘Well, do I have a paper for you!’”

Reed shared that, despite it being an international conference, everybody presented in English.

“It is an English-speaking academic community. I mean, it doesn’t matter what language you natively speak. If you’re going to write something that’s going to be published, it will end up being in English,” he said.

“Once I was outside of that conference, everybody in France spoke French. I mean, weird, crazy concept, right? A lot fewer of them speak English than I think most of us in America would assume.”

Reed plans to continue to utilize the skills and knowledge he has gained at University of Wyoming at Casper in every opportunity that comes his way. UW at Casper even helped prepare him for his past job at Moser Energy Systems back in April 2021.

Today, Reed is enjoying working as his own boss in freelance marketing. He loves using his communication skills to connect customers with the product they’re looking for. At one point, Reed thought about getting a PhD. However, that is not in the plans right now.

“I do really have to ask myself, ‘Why do I want to do that?’ he said. “I mean, with an investment like that, you’d better be applying it. It’s one of those things you don’t just get ’cause you feel like it.”

Even though he won’t be pursuing a PhD right now, Reed believes that everyone could benefit from working towards a degree.

“I think that it would do everybody a great favor if they all had a degree just to have an understanding of the world that’s outside of themselves.”

Visit UW at Casper’s website to learn more about the degrees and programs they offer.