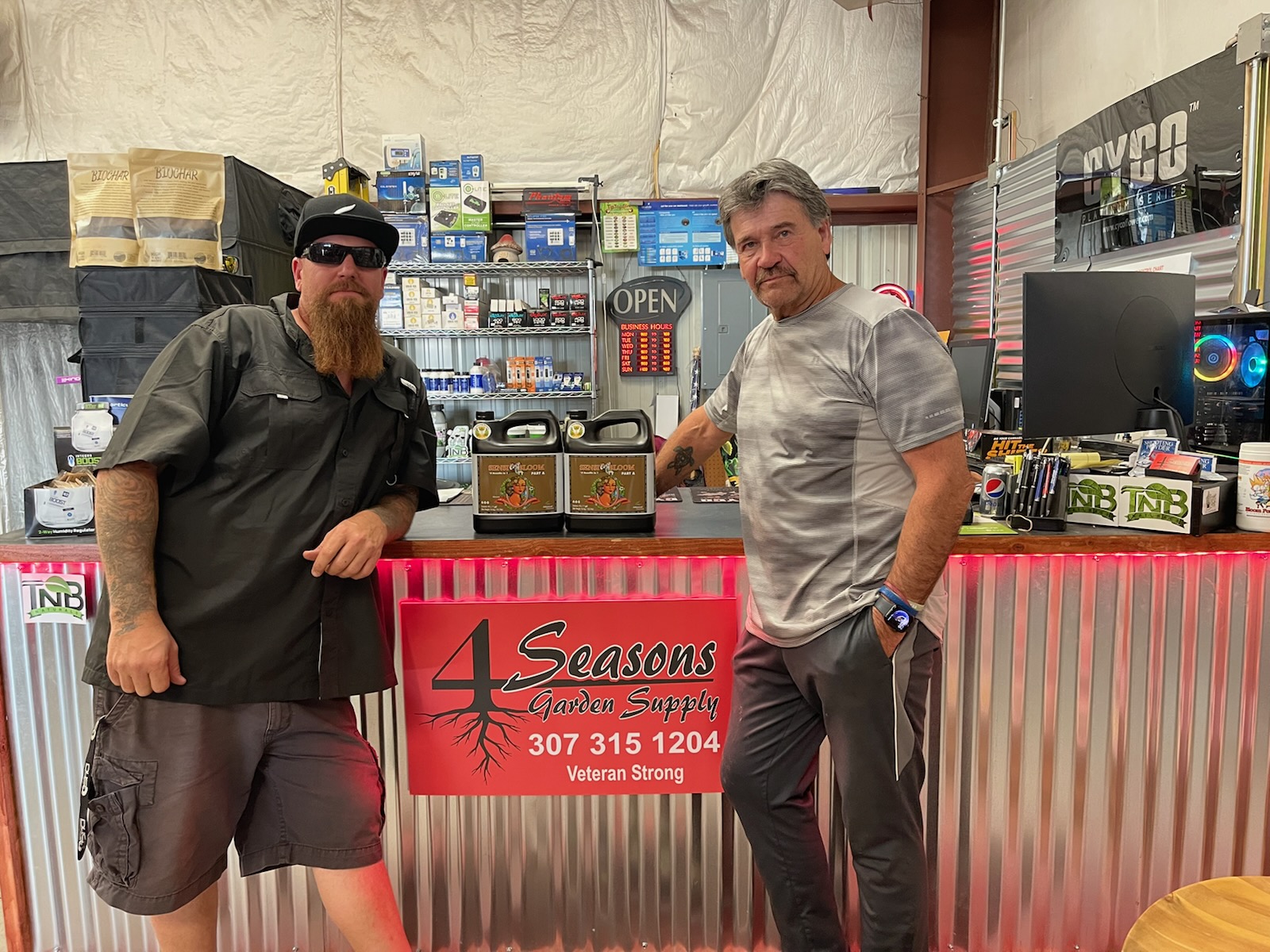 With the changing of the guard from Wyoming’s dry thunderstorms to the high 80s and 90s of summer, new garden gurus have come to town. A joint venture between one with a green thumb and a veteran sprouted the foundation of 4 Seasons Garden Supply and Hydroponics in Casper.

“Budd was a customer of mine from a previous business,” said Neil, co-owner of 4 Seasons Garden Supply. “I had helped him with several of his home greenhouses and Budd was looking for something to do to assist local veterans and the community.”

Neil and Budd launched 4 Seasons Garden Supply and Hydroponics together in January 2022.

“He just makes it all seem so simple,” commented Budd, speaking about his partner.

“We became familiar when I was relatively green and just getting into hydroponics. I visited his store almost daily, showed him my greenhouses and he told me I could do so much more with what I had. We worked together to fully automate the greenhouse and to create a recirculating hydroponics system in a short period of time.”

Months later, the two brainstormed and united as partners for expansion of their new store.

The allure of the business, according to Neil, is that “we have high-quality soils, high-quality nutrients and everything for the novice gardener to the commercial grower.”

With 25 years of experience between the two, they provide customers with a wealth of knowledge about growing in Wyoming’s harsh, dry soils.

Budd shared, “I want people to know — whether they have been gardening for a lifetime or are just new to it — I want them to know, if I can do it, you can do it. With Neil’s help he helped me to understand the right nutrients which were needed for accelerated growth and high-quality products.”

Budd continued, “As far as we know, we are the only hydroponics store in Wyoming with this capacity of services and products. Much of what we have you can only find on the internet.”

Both men insist they are experts in hydroponics, but what really is hydroponics?

“To me, at the base level,” said Neil, “Hydroponics is being able to grow anything in a soilless medium. There are many forms of hydro, depending on what you want to grow. It just depends on your needs and what you are trying to achieve.”

“Hydro is very versatile depending on what you want to grow. Imagination is your limitation,” stated Budd.

He added, “It’s the ability to grow high-quality plants two to three times faster without soil.”

They discussed how many people are using different methods of doing hydroponics. Some include deep-water culture, aeroponics, nutrient film technique and aquaponics.

Besides helping customers across the state to grow healthy plants, the two men also aim to educate and teach people about hydroponics, aquaponics, microgreens and how to grow their own food.

“Microgreens are the fastest growing plants which give you five to ten times more nutrition than the plant at full maturity,” expressed Budd.

Another instrument which keeps 4 Seasons Garden Supply rooted to the community is its reach to veterans.

Budd, a veteran, expressed his feelings: “Because I was a combat vet, I have worked and will continue to work with veterans. As this place grows, we aim to hire veterans, feed veterans and give them a purpose away from war.”

Neil elaborated: “When Budd and I got together, he mentioned how many veterans come home from tours not knowing how to cope with day-to-day life. For many of them, gardening has become a form of release; that’s what we are conveying at 4 Seasons.”

With that comes a bold message, “Veteran Strong”, and much of that comes from Budd and Neil’s experiences together.

“It just seems so simple: We just want people to feed themselves and to become more independent and grow products themselves,” finished Budd.