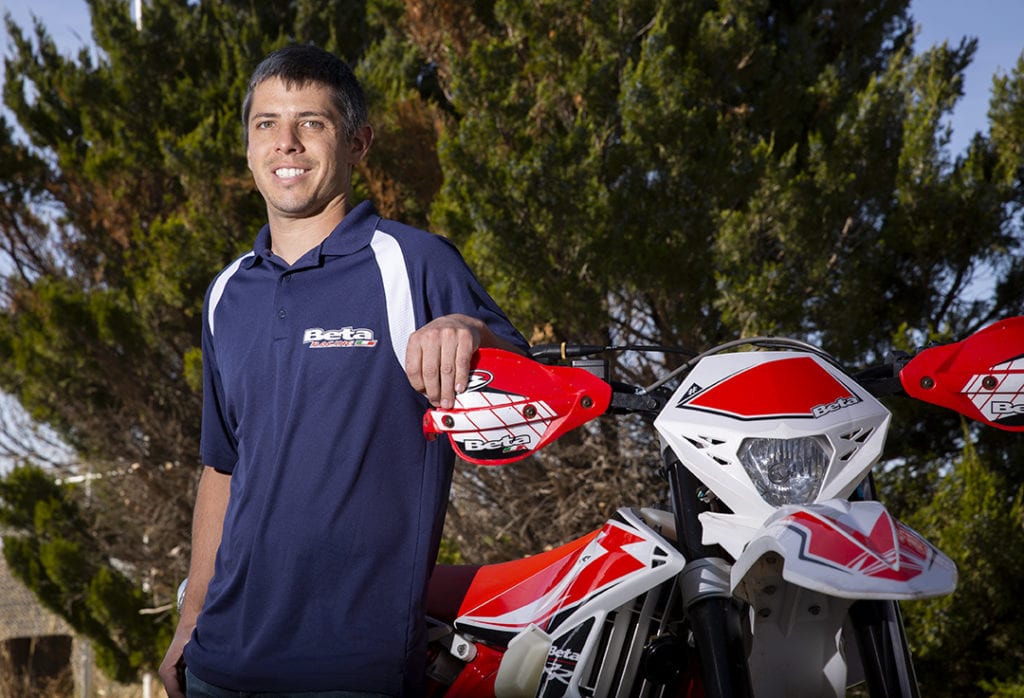 Austin Griess, developer of the NevRA app, poses next to his bike recently in Casper. Griess is one of the finalists in the 2019 Casper Start-Up Challenge. (Dan Cepeda, Oil City)

Mobile applications, or apps for short, are computer programs or software packages that run on devices like iPhones and tablets.

According to one estimate, total app downloads in 2018 totaled over 194 billion, with 5 billion mobile users worldwide. Social and communications apps topped the list of favorites, followed by video players and editors, and games.

And there are apps for just about everything, from the mundane to the bizarre. Except, perhaps, an app for networking dirt-bike riders and snowmobilers.

Enter the NevRA app, the brainchild of Austin Griess, one of five finalists in this year’s Casper Start-Up Challenge hosted by the Wyoming Technology Business Center.

Three winners in this year’s event will each receive $5,000 and will be eligible to receive a share of $50,000 in start-up seed money. They also will receive free office space for a year and professional mentoring.

NevRA, which stands for “never ride alone,” is a means for people to reach out and plan motorsports outings.

“You’re matching two snowmobile riders in the winter or two dirt-bike riders in the summertime,” Austin said. “Both parties would basically have to agree to go ride with each other.”

Austin, like many riders, usually goes on adventures with the same circle of friends. The NevRA app would be a way for riders “to get out and ride with someone you’ve never ridden with before.

“You’re going to get to know some new areas, some new people, new styles, so hopefully it will open the door to really tighten up the riding community,” he added.

In addition to its social networking function, the NevRA app would serve a safety purpose.

“The whole idea is to get far away from your vehicle, and you’re on something that could potentially fail on you, or worse yet, you could have an accident,” Austin said. So, the NevRA app also would be available for summoning help if needed.

Austin has been thinking about an app like NevRA for several years, but the Casper Start-Up Challenge helped him push his idea forward.

“Just making the finals shows that it’s a plausible idea,” he said, and winning “would definitely give me the encouragement to take those extra steps and really hone in and make it happen.”

As far as execution, Austin plans to work with app developers to turn his concept into a finished product, and being a winner in this year’s Start-Up Challenge would certainly help. The $5,000 prize and a possible share of Seed Fund money would allow him to obtain much needed technical support.

Austin said he already had reaped significant benefits just by participating in the Challenge. Business experts at an entrepreneurial “Boot Camp” provided advice on important topics like legal and financial issues, marketing, and intellectual property.

The Start-Up Challenge “Pitch Day” will be held on Nov. 7 at the Lyric in downtown Casper. This year’s finalists will be allotted 20 minutes each to sell their business ideas to a panel of judges. Judges will have 10 minutes after each presentation to ask questions. A reception will follow the announcement of this year’s winners. Pitch Day is free and open to the public.