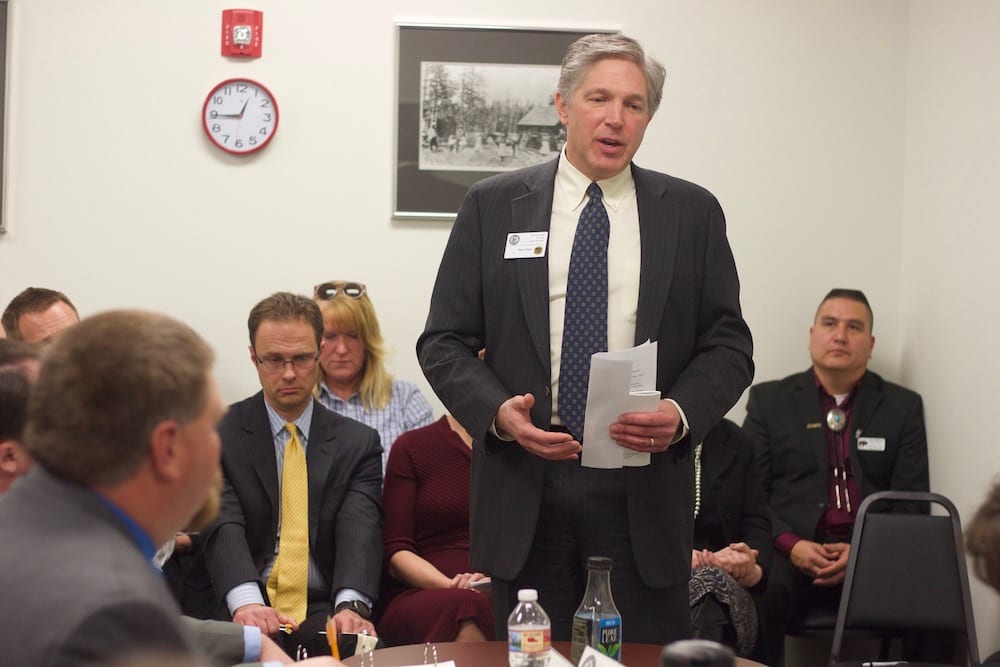 The Wyoming House in its first floor discussion gave initial approval to a much debated bill to strip counties’ zoning authority over private schools.

The 31-24 vote was the first of three the measure faces in the lower chamber. It passed the Senate earlier this legislative session.

Senate File 49 County zoning authority-private schools would enable Steve and Polly Friess to construct a campus for the Jackson Hole Classical Academy as planned in a rural zone south of Jackson. Teton County rules prohibit construction of buildings as large as those planned by the academy. The Friess family went to Cheyenne seeking legislative relief.

Debate covered everything from constitutional rights of Wyoming students to how much money the state saves by having approximately 100 students enrolled in a private, rather than public, school. Some lawmakers repeated calls to treat private schools the way public ones are treated by freeing them from county siting oversight.

Opponents of the measure failed to defeat it in its first House test. Supporters, including Rep. Mark Jennings (R-Sheridan), said the bill is  “fixing a problem.” That problem is Teton County’s strict zoning rules, he and others said.

Rep. Tyler Lindholm (R-Sundance) discounted criticism that the bill would open the door to unbridled development with schools popping up regardless of counties’ infrastructures needs, plans and wishes. Critics of the bill made those points repeatedly.

Rep. Scott Clem (R- Gillette) said the Legislature was dealing with “a county commission that is not working very well with its private partners.

“This story is pretty horrendous,” Clem said of the Friess narrative of Teton County’s refusal to change zoning rules to accommodate the large buildings in the rural zone. “This will fire anybody up.”

County officials dispute aspects of Friess’ account to lawmakers, saying the commission has worked with the school in many cases but reached a limit to the exceptions to planning codes they were willing to grant the school.

Rep. Tim Salazar said the county had put up “egregious barriers” to the Friess plan. But because of lobbying and earlier hearings, lawmakers were not going to be swayed by the House debate, he suggested; “We’ve all made up our minds.”

Rep. Andy Schwartz (D-Teton County) spoke against the bill, citing his years’ of experience on past county planning and county commission boards. He objected to statements that current county officials had run “roughshod” over the Classical Academy and its backers.

“They have said rather derogatory things about duly elected officials,” Schwartz said. In reality, he said, commissioners and planners were “working with zoning regulations they have.”

Rep. Albert Sommers (R-Sublette County) supported his “county to the north,” and its commissioners’ zoning decisions. Elected Teton officials are “trying to maintain the character they want,” he said. “It’s inappropriate to do specific legislation for one problem,” he said.

Other opponents said the Legislature was not the proper venue for the Friess family and the Academy to take its grievance.

“This bill seems to infringe on local control,” Rep Jerry Paxton (R-Encampment) said. “This issue should be better resolved at the ballot box, not at the soap box.”

Rep. Landon Brown (R-Cheyenne) said the academy hasn’t even submitted a full application to the county for its proposed institution yet wants the state to change its laws.

Teton County has ruled only on Friess’ proposed changes to zoning rules and hasn’t taken up specific development proposals.

The county has voted in this fashion, these commissioners have put these rules in place, “because that’s what the people in this county wanted,” he said. “If it’s creating special legislation, it sends a dangerous precedent,” he said.

That precedent would be “if you’ve got enough money [you can say] I want this exact law changed for me,” Brown told colleagues.