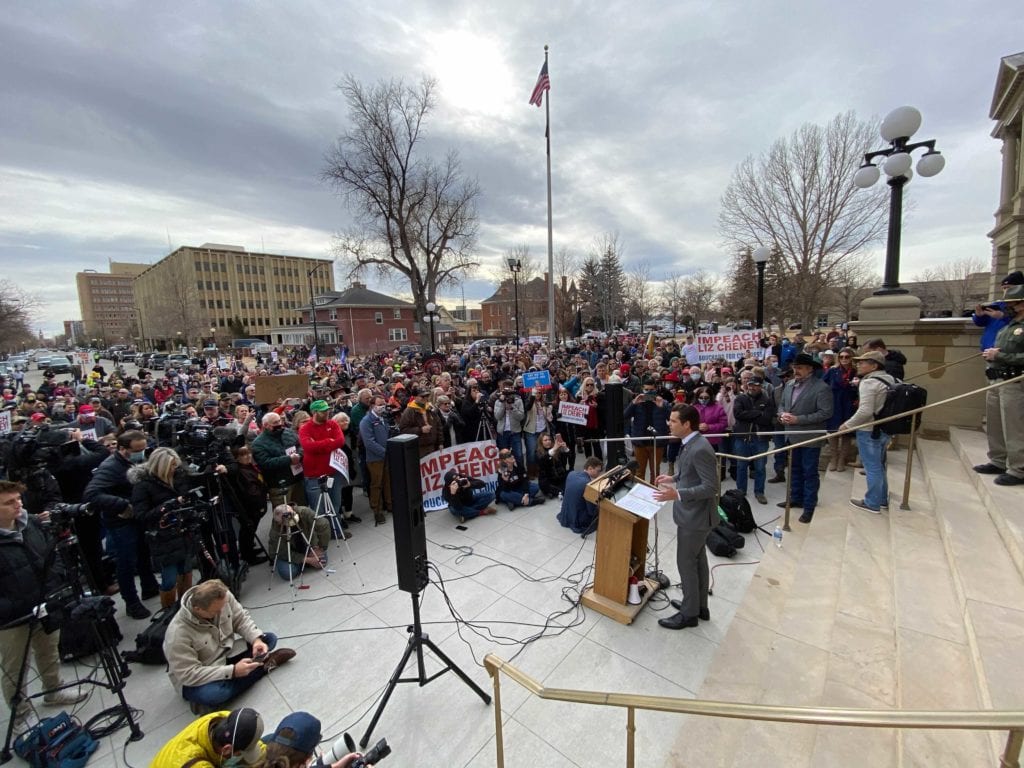 Fla. Rep. Matt Gaetz speaks to a crowd at an anti-Liz Cheney rally held outside of the Wyoming State Capitol building in Cheyenne on January 28, 2021. (Dan Cepeda, Cap City News)

CHEYENNE, Wyo. — Hundreds gathered outside the Wyoming State Capitol on Thursday Jan. 28, 2021 carrying signs, flags and banners. Reporters on the scene say that a short chant of “go home Cheney” was heard from the crowd, before the event began.

“I love Wyoming,” Gaetz told the crowd, beginning his speech just after 1:15 pm, Thursday. “My first trip to Wyoming and I feel like I’m at home.”

Over the weekend, Gaetz announced that he was making the trip to Wyoming to speak out against Cheney, Wyoming’s lone Representative.

One Wyoming Highway Patrol Trooper on scene estimated a final crowd of Thursday’s rally at approximately 700-800 people, when asked by reporters.

Cheney is the number three House Republican in leadership, and has faced criticism by many of her GOP colleagues in the chamber for voting to impeach former US President Donald J. Trump earlier this month.

“If wyoming can beat Liz Cheney, it will bering Washington DC to its knees,” Gaetz said during his Thursday speech in Wyoming

Gaetz also said that it’s not an issue of red versus blue.

“We deserve American excellence,” Gaetz stated. ” The corporate politicians have big checkbooks, but we have the spirit.”

The son of Donald Trump, Donald Trump Jr., also spoke at the rally, addressing the crowd via telephone.

“It seems like Liz Cheney’s favorability seems worse than her dad’s shooting skills,” Trump Jr. said over the phone. “It’s time for a change at the top.”

“Let’s find someone good,” Trump Jr. said. “Get someone for America and against special interests.”

During a call with the media on Tuesday, January 26th, 2021, Gaetz did not mince words when it came to his thoughts on Cheney’s decision to vote for impeachment.

“She not only departed from the vast majority of the Republican Conference on the fundamental question of impeachment, but she did so in a way that put the rest of our conference on the defense when we should have been on the offense against impeachment by reflex,” Gaetz stated during the Tuesday call.

That tone continued at the Thursday speech with Gaetz addressing some of the physical criticisms that he says Cheney has thrown at him.

“Liz Cheney taunts me for wearing makeup. Makeup is to hide slight imperfections of the skin. It does little to hide soulless corruption,” Gaetz said. “I can get the makeup off of my clothes but Cheney can’t get th blood off her hands.”

“In a lot of ways this feels like the most American of states,” Gaetz said of Wyoming. ” How is it that Wyoming has a disappointing Congresswoman? To answer that you have to ask why does America have such a disppointing Congress.”

“It’s going to take everyone of us working together to drive our agenda to save our country,” Gaetz told the crowd. “You can help me break this corrupt system. Send Liz Cheney home.”