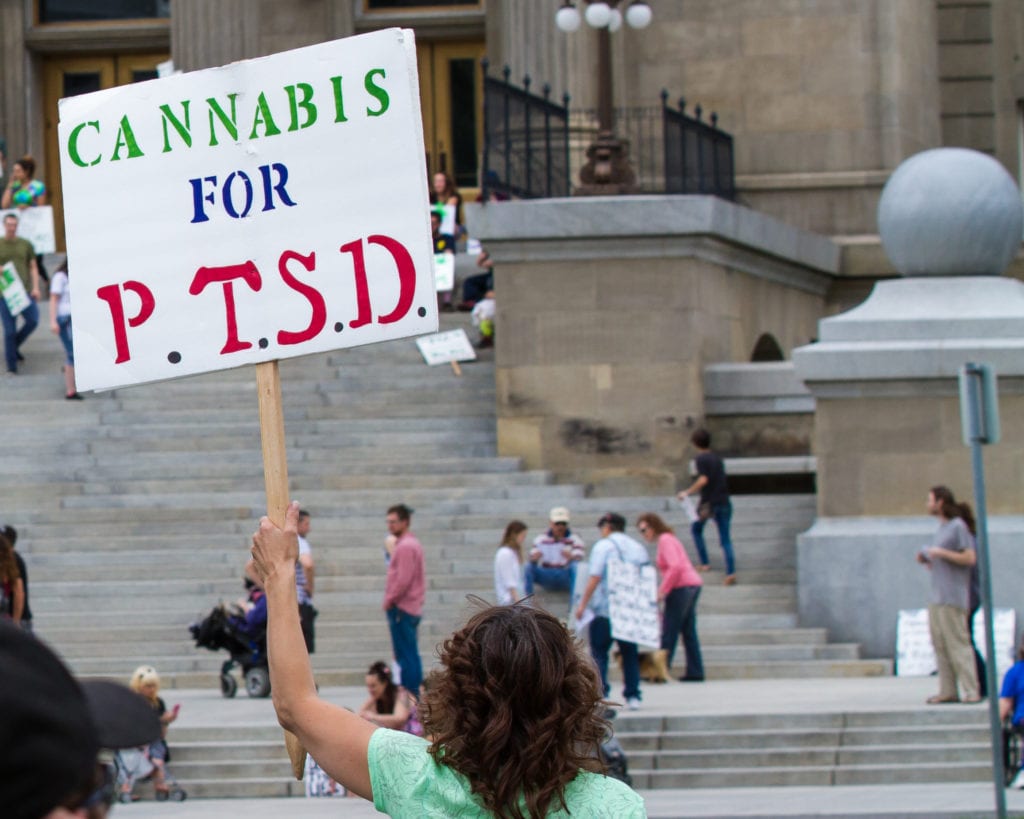 BOISE, IDAHO/USA - MAY 7, 2016: Woman displaying a sign in support for cannabis for PTSD patients for the Global Marijuana March in Boise, Idaho (Shutterstock)

CASPER, Wyo. — Alabama Governor Kay Ivey signed legislation on Monday that will legalize medical marijuana in the state, according to the Associated Press. The bill will allow people with certain medical conditions such as cancer, a terminal illness or depression to get medical marijuana with a doctor’s recommendation.

85% of Wyoming residents support legalizing medical marijuana, according to a University of Wyoming Survey and Analysis Center (WYSAC) survey conducted in Oct. 2020. 75% support decriminalizing marijuana in Wyoming and 54% are in favor of full legalization.

Wyoming legislators sponsored a bill during the 2021 General that would have called for a study into what it would take to implement medical marijuana in the state.

Another bill proposed legalizing recreational marijuana, which would have generated an estimated $49.5 million in new revenue for the state in fiscal year 2022, according to the Legislative Service Office.

Wyoming House Judiciary Committee Chair Jared Olsen, who sponsored the bill to fully legalize marijuana, said in March that he thinks change to marijuana’s legal status in the state is inevitable. He suggested the legislature should act before federal re-scheduling occurs or Wyoming voters choose to legalize marijuana through a ballot initiative.

Rep. Bill Henderson (Laramie County) was a sponsor of the bill calling for the medical marijuana study and also indicated he thinks change will happen: “To me it is not a question of if we’re going to legalize marijuana, it is a question of when.”

Rep. Pat Sweeney (Natrona) told the House Judiciary Committee during their March 12 meeting he supported both bills and that he has long held the view that medical marijuana in particular should be legalized.

He said that family members dealing with medical issues have been able to access synthetic medications approved by the U.S. Food and Drug Administration which mimic natural THC (Tetrahydrocannabinol), but that his family members have told him the synthetic products are “not nearly effective as the oils and other treatment methods available in Colorado.”

While Sweeney supported both pieces of legislation, he cautioned that he doesn’t believe legalizing marijuana “will be this huge economic driver.” House Bill 209 would generate an estimated $49.5 million in new revenues for the state, but Sweeney said that with costs to regulate marijuana, he expects the net impact for the state would be much less significant.

Rep. Mark Baker (Sweetwater) told the House Judiciary Committee that he has a medical condition known as ulcerative colitis (though he was initially diagnosed with Crohn’s disease) and has had his colon removed and small intestine shortened.

Baker said he has been living with the condition for years and “part of the time, I’ve utilized access to cannabis…life is easier with than without.”

Baker is also former director of Wyoming NORML and said in April he shares concerns some have expressed about law enforcement operations aiming to suppress cannabis where people potentially face harassment. When asked about the March 29-30 “drug interdiction operation” in which law enforcement agencies in the Casper area arrested 23 people, Baker said that he understands people’s frustrations but thinks the law enforcement agencies are put in a difficult position where they are “forced to enforce bad laws.”

He said the problem needs to be addressed through changes to the law. Casper Police Chief Keith McPheeters in April defended the “drug interdiction operation” which was supported by U.S. Drug Enforcement Agency “cannabis suppression” funding. He said that he thinks people opposed to the operation and the Casper PD’s acceptance of DEA funds should understand that such operations also help crack down on other illicit drugs like methamphetamine.

Three Casper City Council members opposed the acceptance of the DEA funding, which led Council member Bruce Knell to accuse them last week of breaking their oath to the Constitution. When it was pointed out to him by City Attorney John Henley and others that the Constitution does not require elected officials to accept the funding and that marijuana is illegal under statutory law and not the Constitution, Knell apologized for his accusations.

Wyoming NORML Director Bennett Sondeno said in April that DEA funded operations like the one in Casper are “such an incredible waste of resources. They are wasting our tax dollars.”

Additionally, Sondeno said that the operations like the one in Casper in which people are targeted via traffic stops are akin to the department “trying to find easy busts” and akin also to so-called “stop-and-frisk” programs in places like New York City which have been shown disproportionately targeted racial minorities. A federal judge found the NYPD’s “stop-and-frisk” policies unconstitutional in 2013, according to The Leadership Conference on Civil and Human Rights.

Casper City Council member Shawn Johnson said during the May 11 work session he has some concerns about grant funding going toward police operations that may violate people’s Fourth Amendment rights, which protects people against unreasonable search and seizure.

Meanwhile, the Wyoming State Bar said on Wednesday that a Cheyenne attorney has been censured by the Wyoming Supreme Court over his actions in a case against two hemp farmers and two people working at the farm.

A law enforcement officer provided false testimony during a preliminary hearing in the case and Cheyenne attorney David E. Singleton was aware this testimony was false, according to the Wyoming State Bar.

“Each year, at least 8,000 different people are booked into local jails in Wyoming,” the Prison Policy Initiative says.

The Wyoming Legislative Service Office said in 2019 that the cost of housing one inmate at the Wyoming State Penitentiary in 2018 was about $128.63 per day or about $46,950 annually. The approximate cost at the Wyoming Women’s Center was about $39,862 annually.

Neither the medical marijuana nor recreational marijuana bill passed in the Wyoming Legislature this year. The recreational legalization bill advanced out of committee, but House leadership allowed it to die without bringing it up for full debate in the House of Representatives.

“We expect the legislature to do better to represent the people,” Sondeno said in April.