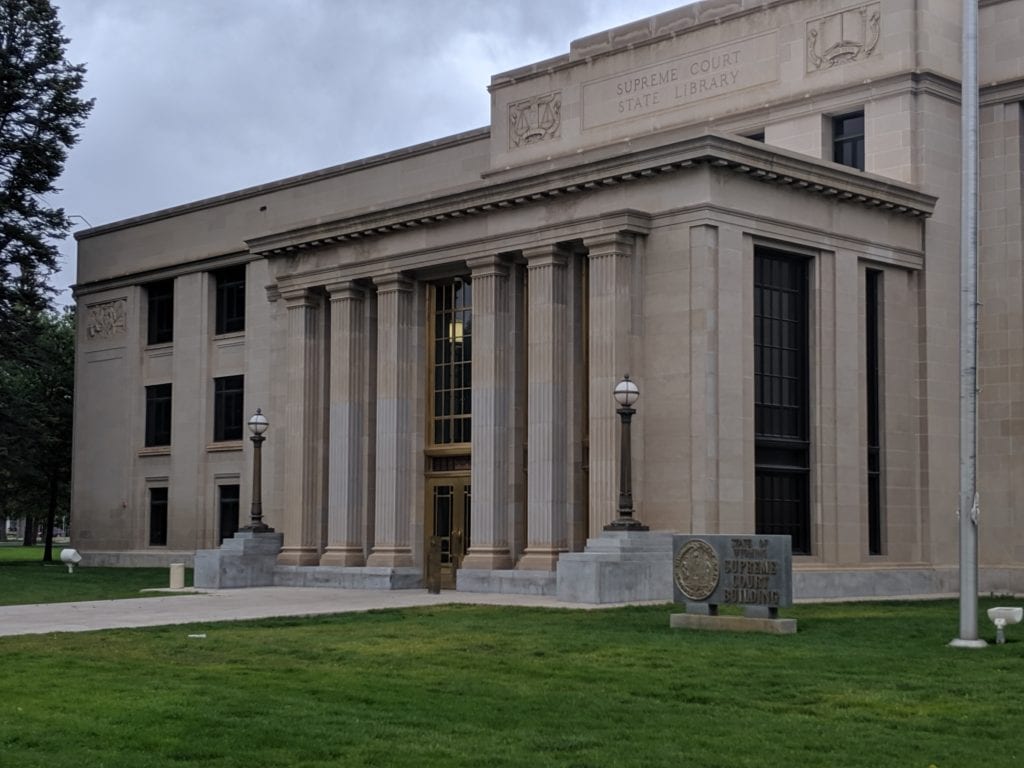 CASPER, Wyo. — Wyoming Deputy Attorney General Jenny Craig has filed a motion with the Wyoming Supreme Court requesting that the name of a law enforcement officer accused of lying under oath be redacted.

Singleton was censured for failing to correct Briggs’ alleged false testimony during a preliminary hearing in a case against hemp farmers in Laramie County.

The AG’s petition to the Supreme Court argues that the Wyoming State Bar and the Supreme Court “did not have jurisdiction to determine whether Agent Briggs engaged in wrongdoing or impose discipline against him.”

The petition says that while Briggs was not formally disciplined by either the Wyoming State Bar or the Supreme Court, the report and recommendation as well as a press release announcing the Supreme Court’s censure of Singleton “have accomplished the equivalent of formal discipline.”

The AG’s petition says that Briggs was not provided notice by the Wyoming State Bar Board of Professional Responsibility of the allegations against him and was not given the chance to defend himself.

Following press release announcing the public censure, Oil City and Cap City reporters made multiple attempts to reach out to the Wyoming DCI for comment on the matter, but those requests have not been returned.

The AG’s petition to the Supreme Court asks that the public censure order and accompanying report be amended to redact Briggs’ name entirely and remove “any statements that conclusively assert Agent Briggs testified falsely.”

The petition also asks that the Wyoming State Bar and Supreme Court acknowledge they don’t have jurisdiction in the matter and acknowledge that Briggs was not given a chance to defend himself against the allegations.

The nature of the alleged false testimony is explained in the Board of Professional Responsibility’s report and recommendation of the public censure.

When Briggs and other Wyoming DCI agents executed a search warrant of the hemp farm property in Nov. 2019, agents were shown test results of the farm’s hemp crop which showed that the THC content was less than 0.3% THC, which is the legal limit in Wyoming. The farm owners had hired Botanacor, an independent agency, to test samples of the hemp crop and obtain these results.

Those test results were also texted to a Special Agent Moon.

In Feb. 2020, the four defendants were charged with various felony charges after the Wyoming DCI obtained test results of plant material they had seized during the raid of the property. A report detailing those lab results showed that all but one sample had tested above 0.3% THC.

Briggs testified during a preliminary hearing on July 9, 2020 before First District Court Judge Antoinette Williams, according to the report and recommendation of public censure.

Jubin then showed Briggs exhibits of the test results that had been shown to him and Moon which showed the THC content was less than 0.3%. Briggs testified that: “I don’t recall if these were the exact ones that were presented to me at that time.”

The preliminary hearing didn’t conclude on July 9 and was scheduled to resume on Aug. 6.

On July 24, Jubin sent an email to Briggs pointing to inaccuracies in his testimony during the preliminary hearing. In the email, he asked Briggs to correct his sworn testimony.

After receiving this email, Briggs texted Singleton: “Dude, Jubin is going hard in the paint. He is sending me emails, trying to tell me my testimony is wrong.”

Singleton responded to Briggs’ text message as follows: “He sent me an email yesterday and said the same thing. Not trying to be antagonistic just trying to ‘educate’ me. That about sum it up?”

Briggs then responded: “Oh ya. ‘I’m giving you the chance to correct your testimony.’ Is there any recourse against him for such activity? He is actually insane.”

Briggs later sent Singleton the email he had received from Jubin.

When the preliminary hearing resumed, Briggs was again called to testify. Jubin attempted to ask about the email he had sent in regard to the inaccuracies in Briggs’ testimony during the July 9 hearing.

But Briggs testified that he had not read the email: “To be honest, sir, I didn’t read your e-mail. I forwarded it to counsel.”

Wyoming State Bar Board of Professional Responsibility note in the report that Jubin had no way of knowing this testimony that Briggs hadn’t read the email was false, but that Singleton knew it was false and failed to correct it on the record.

On redirect, Singleton asked Briggs if he saw the test results on the day of the raid of the hemp farm. Briggs testified: “I don’t recall paying attention to them, no.”

Singleton then asked whether it was possible Moon showed Briggs the results but that he didn’t recall. Briggs testified: “Yes. I was trying to figure out the scene and interviews and things of that nature.”

At that point in the report, the Wyoming State Bar’s Board of Professional Responsibility state: “Thus, rather than correct the inaccurate testimony he offered at the first hearing regarding the test results, Agent Briggs continued the prevarication.”

At the conclusion of the hearing, the judge ruled that there was not sufficient evidence of the defendants’ intent to possess, distribute or conspire regarding marijuana. Singleton dismissed the charges following the judge’s ruling.

The AG’s office said that an internal investigation conducted by Wyoming DCI agents of the matter found that Briggs did not lie during the preliminary hearing.

The petition argues that the report and recommendation accompanying the public censure order “will no doubt always be used to call into question Agent Briggs’ testimony in every case in which he is a witness.”

While the AG’s office is petitioning the Supreme Court to have Briggs’ name redacted, the Wyoming Peace Officer Training and Standards (POST) Commission, which is housed under the AG’s office, said last week that they are investigating the matter of Briggs’ alleged false testimony.

POST Executive Director Chris Walsh said that he could not share specifics about that investigation as it was an active investigation. POST is required to investigate any complaints about officer misconduct that are filed with their office.

Wyoming House Rep. Karlee Provenza (Albany County) said last week she has concerns about how oversight of law enforcement happens in Wyoming. One of those concerns is possible limits on the kind of oversight the Wyoming POST can provide.

Provenza said she sees problems with POST being housed under the Attorney General’s Office. When one agency is responsible for not only the certification of officers but also with dealing with misconduct and additionally with providing legal counsel for officers facing any charges, she said she thinks the state should consider whether the structure is appropriate.

“If POST can be separated in being able to make those decisions….I think that is a move in the right direction,” she said.

In addition, she said that oversight needs to include people who aren’t themselves part of the law enforcement structure in Wyoming. Wyoming statutes currently require that the POST Commission include:

Provenza said she thinks there needs to be more community involvement in law enforcement oversight. She said there are some examples in communities in the state that are a move in the right direction, pointing to the Cheyenne Police Department “Force Review Board” formed under former Police Chief Brian Kozak in 2020 to include three citizens as well as Cheyenne PD members to review instances in which officers use force.

She added that the Laramie City Council has formed an “Ad Hoc Working Group for Police and Community” which is working on how to ensure transparency, accountability and oversight of police.