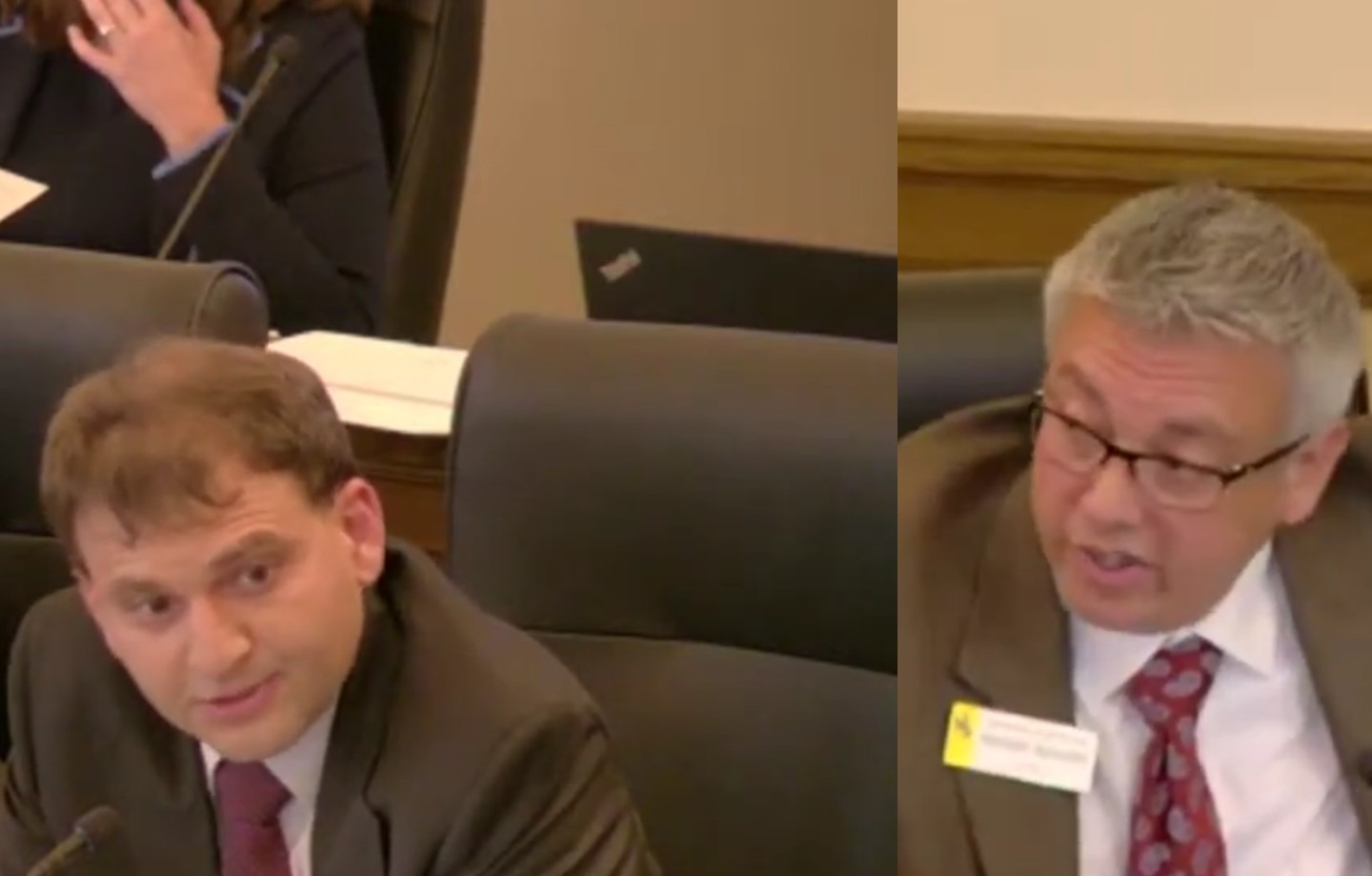 Bouchard and Gray are both among a host of candidates challenging Wyoming U.S. Rep. Liz Cheney for the Cowboy State’s only seat in the U.S. House of Representatives.

During the committee meeting on Wednesday, Gray made a motion to draft legislation that would make the Wyoming Department of Audit a division of the Legislative Service Office and give it a new ability to audit county elections. Under current state law, county clerks are tasked with conducting post-election audits.

Gray said during the meeting that he has visited Arizona to witness efforts questioning the the results of the 2020 presidential election in which now-President Joe Biden defeated then-President Donald Trump. Gray said that Arizona has an auditor general appointed by the legislature and that he witnessed “incredible work” in Arizona surrounding audits of the presidential election results.

Trump continued to make false claims this July about voting fraud and irregularities in Arizona, according to the Associated Press. Maricopa County “officials and elections experts say the claims are false and based on a misunderstanding of election materials, which they say creates an appearance of irregularities where none exist,” the AP said in regard to claims backed by some Arizona Senate Republicans, the security firm Cyber Ninjas, and Trump himself.

Gray said on Wednesday that Wyoming should restructure the Department of Audit to more closely resemble Arizona’s system, suggesting that the department should be led by an auditor general recommended by the Wyoming Legislature’s Management Audit Committee, where both he and Bouchard are members.

Bouchard accused Gray of needlessly creating the appearance that there are problems with the integrity of Wyoming’s elections.

“I’m sick and tired of hearing about it,” Bouchard said. “Why don’t we go to your clerk and audit your election and see if you were duly elected?”

Gray called a point of order, saying that Bouchard’s comments were “impugning intent” onto the bill Gray proposed for the Managment Audit Committee’s consideration.

Committee Vice Chair Sen. Brian Boner (Converse, Platte County) attempted to keep the discussion focused on the specifics of the legislation Gray proposed drafting. Since part of Gray’s proposal was to move the Department of Audit under the LSO and increase its scope by giving it the power to audit elections while simultaneously making no increase to the department’s budget, Boner asked how that would be possible.

While Gray said he thought that would be possible, Sen. Mike Gireau (Teton County) expressed skepticism.

Gireau also said he agreed with earlier comments from Sen. Drew Perkins (Natrona County) that the legislature is already fulfilling its Consitutional duty to “provide by law for examination of the accounts of state treasurer, supreme court clerks, district court clerks, and all county treasurers, and treasurers of such other public institutions as the legislature may prescribe” with law dictating the current structure of the Department of Audit.

Gray said that he thinks it is important to give the legislature the power to audit elections (by moving the Department of Audit under LSO) “in light of the problems we have seen across the country.”

Bouchard said that he has researched voting machines provided by the company Election Systems & Software (ES&S) which are used in Wyoming.

“ES&S machines have an audit function in them,” Bouchard said. “They have the capability and they have tested it.”

He said that he has spoken with people in other states where election integrity has been questioned and found that in those states ES&S voting machines were not being used. Bouchard accused Gray of dragging the elections auditing issue into the Management Audit Council meeting because of Gray’s own aspirations to win election to the U.S. House in 2022.

“Quite frankly, I’m disgusted that you’re pulling this election issue because you are running for office here,” Bouchard said.

Gray retorted that Bouchard was “talking about himself.”

“We really need to focus on the issue,” he said. “I know there is a greater political context here but let’s focus on the motion.”

Boner noted that he had earlier requested that committee members keep the conversation from becoming personal and that that if his request was ignored again, he would require the committee to vote on Gray’s proposal without further discussion.

“Someone just made an accusation. Am I allowed to respond to that?” Gray asked.

Boner said that he thinks Gray would have “ample opportunity to respond outside of the context of this meeting.” He said that if Bouchard and Gray were allowed to continue making accusations about one another, it wouldn’t stop and would continue to disrupt the focus of the Management Audit Council meeting.

“I’m sorry, but this is not a public debate. … [Y]ou are in a campaign and so there are slightly different rules and so we have to stay focused on legislative business,” Boner said.

Gray then responded to an earlier question from Rep. Landon Brown (Laramie County) asking who would have the power to order an audit of elections under Gray’s proposal.

Gray said that when the legislature is in session, the full legislature would call for an election audit via resolution. Outside of legislative session, he said the Management Audit Committee along with legislative leadership would have oversight.

The committee defeated Gray’s proposal on a 7-2 vote.