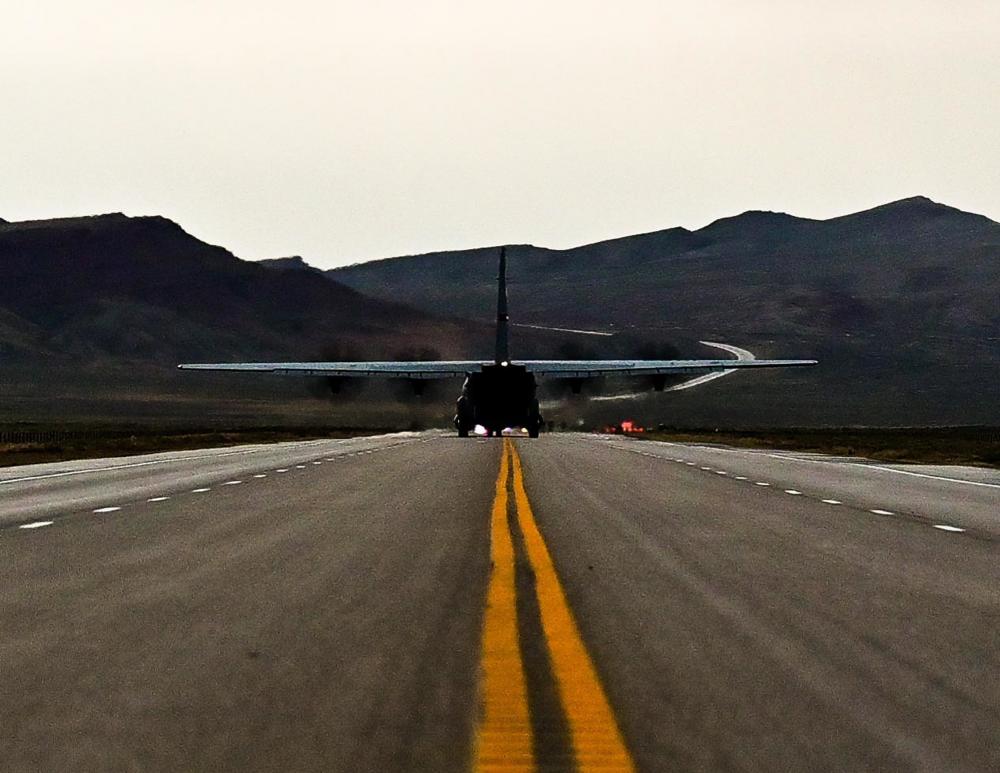 An Air Force Reserve Command C-130J Super Hercules reverses down a four-lane highway in Wyoming on Sept. 13, 2021. This exercise kickoff event tested the ability to land in a variety of scenarios. The Rally in the Rockies 2021 exercise applies a variety of combat concepts to enable agile mission execution. (U.S. Air Force photo by Maj. Ashley Walker)

CASPER, Wyo. — Air Force Reserve Command kicked off a week-long exercise, Rally in the Rockies 2021, by landing a C-130J Super Hercules aircraft on the highway near Rawlins, Wyoming on September 13, according to a release from the Defense Visual Information Distribution Services (DVIDS).

Military officials say that the highway closed early in the morning to ensure the aircrew could safely practice recovering personnel without access to a runway within simulated enemy territory.

This was one of many training scenarios scheduled for September 13-16 across Colorado and Wyoming, involving more than 12 Reserve and National Guard units, per the releases.

Units are tasked with delivering critical cargo and personnel to U.S. Forces located in simulated contested areas, according to the release.

“The Rally in the Rockies exercise ensures the Air Force Reserve and National Guard can provide an instantaneous surge capacity across most mission sets to strengthen our active duty counterparts,” said Maj. Nick Hainsfurther, 913th Operations Support Squadron pilot and lead exercise planner. “With the help of the Wyoming Department of Transportation, we were able to successfully demonstrate our versatile combat airlift capabilities.”

The 913th Airlift Group, based out of Little Rock Air Force Base, Arkansas, served as the lead planning unit in the mobility-focused exercise.

Officials say that Reserve Citizen Airmen crafted the scenario and aligned logistics to ensure each unit could focus on training. In order to effectively accomplish combat operations, current scenarios assume traditional bases will be immediately threatened.

The exercise required various units to come together to deliver cargo, paratroopers, artillery, and task force resupply and to conduct personnel extraction, according to the release. The scenario was designed to test the interoperability of Reserve and National Guard units to execute Multi-Capable Airmen missions in challenging, contested scenarios.

“This is an exercise evolution of the Rally in the Valley 2020 exercise conducted in West Virginia,” said Maj. Christopher Acs, 327th Airlift Squadron pilot and exercise planner. “Our efforts will prepare Reserve and National Guard units to execute at the speed and range required to take on near-peer adversaries. Additional training included combat airlift as well as multi-capable mobility Airmen who are able to refuel and re-arm aircraft in austere locations with minimal support.”

Hainsfurther added that exercises such as RitR21 are critical to ensuring Reserve forces can project the Joint Force when called upon, enabling strategic depth for the future fight.

For more information on Rally in the Rockies 2021, visit www.dvidshub.net/feature/RitR21.