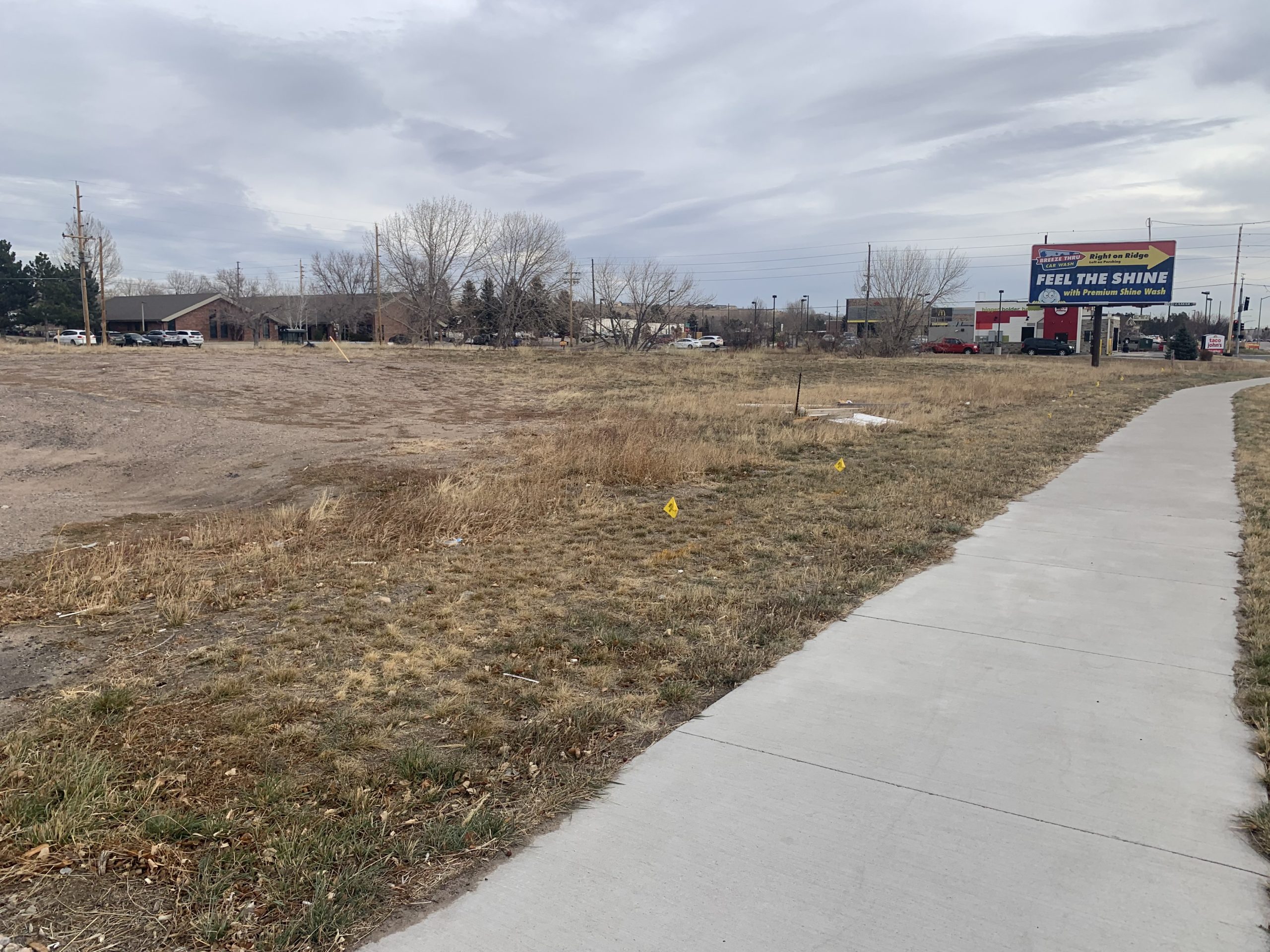 A dirt lot east of City Brew Coffee on Dell Range Boulevard in Cheyenne, the expected future home Wyoming's first Runza location. The company said Tuesday that it is finalizing a deal to occupy the space and build a strip center that includes the restaurant on the property. (Briar Napier, Cap City News)

CHEYENNE, Wyo. — Earlier this week, Nebraska-based fast-food chain Runza announced its intention to plant its foot in Wyoming, specifically in Cheyenne, with its first restaurant in the state.

It turns out that the future Cheyenne location has already been scoped out — and it might not be the Cowboy State’s only spot to get the Nebraskan culinary staple.

The future home of Wyoming’s first Runza restaurant will be on Dell Range Boulevard in Cheyenne on what’s currently a dirt lot between a City Brew Coffee and a Taco John’s — pending expected final closure of the deal Wednesday — per Runza Director of Franchising and Partnership Development Jon Wurst to Oil City/Cap City News on Tuesday.

The future home of Wyoming’s possible second Runza restaurant, however, could be in Torrington as the company noted that it is looking for interested franchisees that could move a very early-stages plan for an eatery in the town of just under 7,000 forward.

Wurst will attend an interest session for potential franchisees in Cheyenne this week. The session will be at 6 p.m. Thursday inside the Yellowstone Conference Room at the Little America Hotel & Resort on 2800 W. Lincolnway St. The Cheyenne location will likely open sometime later next year.

“We are closing on a site,” Wurst said Tuesday to Oil City/Cap City. “Obviously, we don’t have the official address, but it’s east of the City Brew on Dell Range and we’re closing on that tomorrow.”

Runza, a Lincoln, Nebraska-headquartered fast-food restaurant that’s a source of pride for many Huskers, is known for its namesake sandwich — a ground beef, cabbage and onion-stuffed bread roll at its simplest — and currently has 85 locations in four states, the vast majority of which are in Nebraska.

Wurst said that the company plans to turn the site into a small strip mall with two other buildings for other businesses. The Runza would occupy the south end and feature a drive-thru and sit-down area, what Wurst called the “traditional” Runza restaurant.

“In my case, I find the franchisee and our past director of operations would find the tenant or — as we did in Cheyenne — find a site and say, ‘Let’s move forward,’” Wurst said. “We close tomorrow on the site, then we’ll start building the strip center, and my job is to find the franchisee, which I’m hoping to do Thursday night, and then [the company] would find a tenant for the other two suites.”

While the Runza in Cheyenne is essentially set in stone, the potential Torrington location has a few more layers to the story.

Wurst hopped on a jet with other company reps to scout possible Runza sites in South Dakota and Wyoming and couldn’t nail down a Torrington spot, but the company’s marketing department put ads in newspapers and digital media around the area to gauge interest for franchising in early 2020. Nothing stuck, but Wurst said the company is testing the waters once again now that there’s added buzz from the incoming Cheyenne restaurant.

At the franchisee interest session Thursday, Wurst will go through some material (the “nuts and bolts,” as he calls it) and a PowerPoint presentation before taking questions from attendees about anything from financing to contracting. He’s adamant in his belief that a second Wyoming location would be a keen investment.

“In Torrington, if someone were to approach us, we feel like that person could hit a home run,” Wurst said. “I never take anything off the table or close any doors, so if somebody were to come to me and say, ‘Can I buy that part of the strip center?’ or ‘Are you going to build it to the specs of a typical or prototype Runza?’ … I don’t like to take anything off the table. I like to keep everything open.”

In addition to the Runza sandwich, the restaurant serves other unique fare like a chili and cinnamon roll meal and “Frings,” or crinkle-cut French fries and onion rings mixed together. Standard fast-food options like burgers, chicken dishes, salads and desserts are also sold.

Runza is also known for “Temperature Tuesdays,” a promotion during every Tuesday in January and February in which the lowest temperature at any of its stores correlates with the price of a Runza sandwich. That means if the coldest temperature is 15 degrees, a sandwich costs 15 cents with the purchase of fries and a drink. If it’s zero or below, the sandwich is free.

And yes, the Cheyenne location will have the promotion, too — even if it’ll need some help to do it.

“We had to hire off-duty police officers for traffic because the line out of the drive-thru into major streets [was] being blocked,” Wurst said of past Temperature Tuesdays. “With people coming off of Dell Range, there’s not much of a cutout to get into City Brew and Runza. I’m going to have to mention that.”