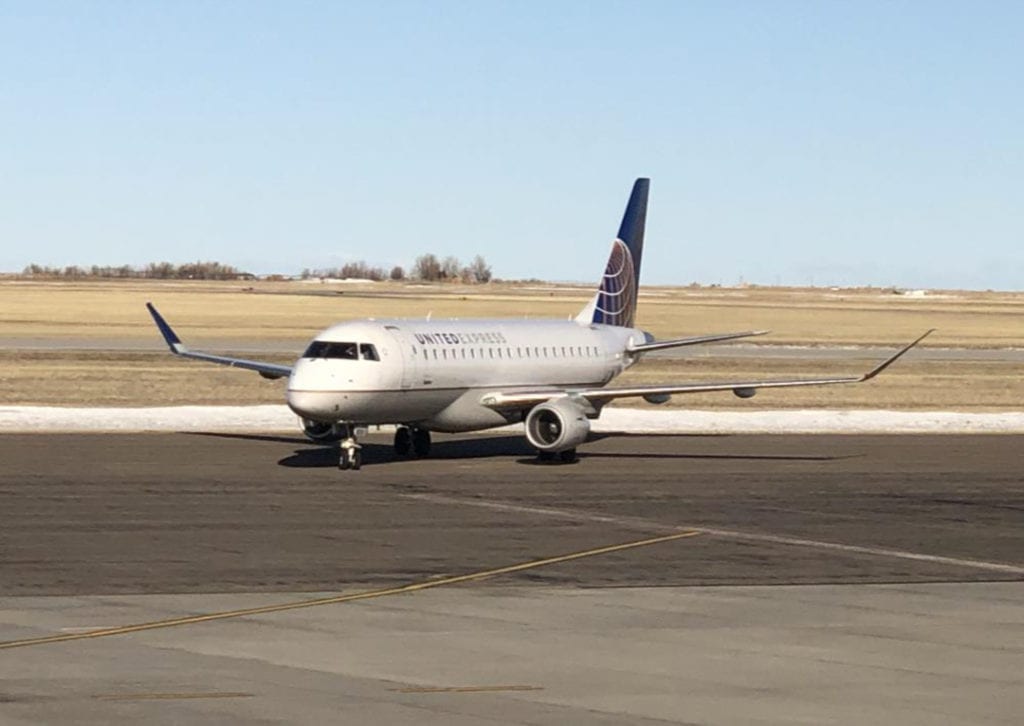 A United Airlines E-175 is pictured in a handout photo. The larger aircraft will be put into service in Casper and Denver. (Courtesy Natrona County Internatinal Airport)

CASPER, Wyo. — Officials at two major Wyoming airports say there have been impacts to flights mirroring the strain on travel worldwide, with more than 13,100 flights grounded worldwide since the weekend.

Nathan Benton, Deputy Director at the Cheyenne Regional Airport, told Oil City there been half a dozen cancellations over the past week, a “significant” impact for a hub that runs only two flights to and from Denver daily.

The volume of flights meant that The Overnight stays for passengers are common for any cancellation due to the low volume of flights, Benton said, adding that impacts would likely be more significant once travelers reached major hubs.

Glenn Januska, director of the Casper-Natrona County International Airport, said there was one flight cancelled on Monday, and there had been several over the past week. The airport typically runs about 4-5 flights per day in the post-holiday season, when there is a lull in air travel until spring break.

Though Januska was unsure of the cause of the cancellation of Monday’s United flight, he said airlines have been strained by staffing shortage as air travel begins to rebound from the pandemic.

“Pre-COVID, you had a pilot shortage,” Januska said. When the pandemic effectively shut down air travel, there was a glut of pilots, and many were encouraged to take early retirement.

As air travel has recovered, airlines have struggled to fill the ranks with requisite qualified crew members, especially with COVID-19 and its variants surging in parts of the country and around the world.

“Most of the cancellations around the holidays were related to pilots and test crews testing positive, or having to quarantine,” Januska said.

“That absolutely rings true to me,” Benton said of Januska’s assessment of the staffing shortage in the airline industry. “There’s not a lot of slack anywhere.”

Last week, the Centers for Disease Control shortened the recommended COVID-19 isolation and quarantine period from 10 days to five, a move lauded by the airline industry but criticized by the president of the flight attendants union.

The problem worldwide has been exacerbated by a winter storm hitting the mid-Atlantic on Monday. Weather impacts are expected, and usually proven correct within a few days, Januska said. The continued impacts due to staffing and the persistence of COVID-19 remains to be seen.