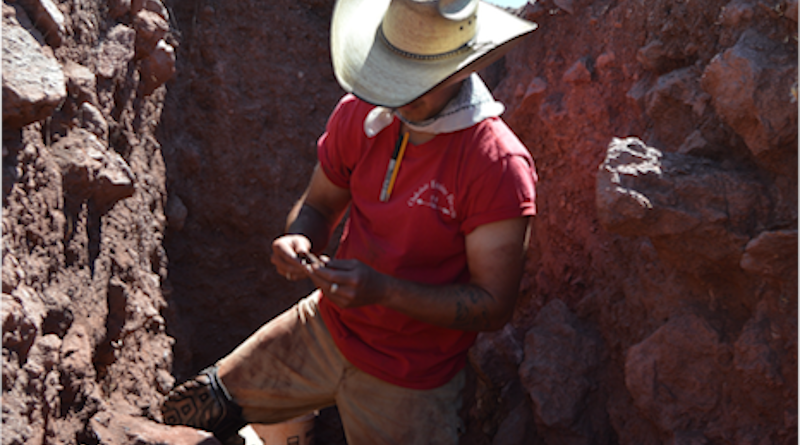 UW Ph.D. student Chase Mahan inspects an artifact from excavation at the Powars II archaeological site in 2020. Mahan is one of the co-authors of a new paper that confirms the site at Sunrise in Platte County is the oldest documented red ocher mine -- and likely the oldest known mine of any sort -- in all of North and South America. The paper was published in PNAS. (Spencer Pelton Photo)

CASPER, Wyo. — The University of Wyoming has confirmed that an ancient mine in eastern Wyoming is the oldest documented red ocher mine, if not the oldest known mine of any sort in North and South America.

UW announced the researchers’ findings last week as they were published in the May edition of Proceedings of the National Academy of Sciences, with Wyoming State Archaeologist Spencer Pelton as the paper’s lead author.

Archaeological excavations led by Pelton at the Powars II site in Platte County confirmed that humans produced red ocher at the mine starting nearly 13,000 years ago.

This confirms theories advanced by famed UW archaeologist George Frison, who began researching the site in 1986, UW said. The excavations were completed shortly before Frison’s death in September 2020. He is listed as a co-author of the paper.

“It’s gratifying that we were finally able to confirm the significance of the Powars II site after decades of work by so many, including Dr. Frison, who learned of the site in the early 1980s and was involved in the research until his death,” Pelton said.

The Powars II site is one of only five such quarries identified in all of the Americas, UW said.

Red ocher, also known as hematite, fulfilled a wide range of functions in Paleoindian societies, including being used as a pigment in rituals, UW said. It has been found at ancient graves, caches, campsites and kill sites in the Great Plains, the Rocky Mountains and beyond.

More information on the researchers can be found here.