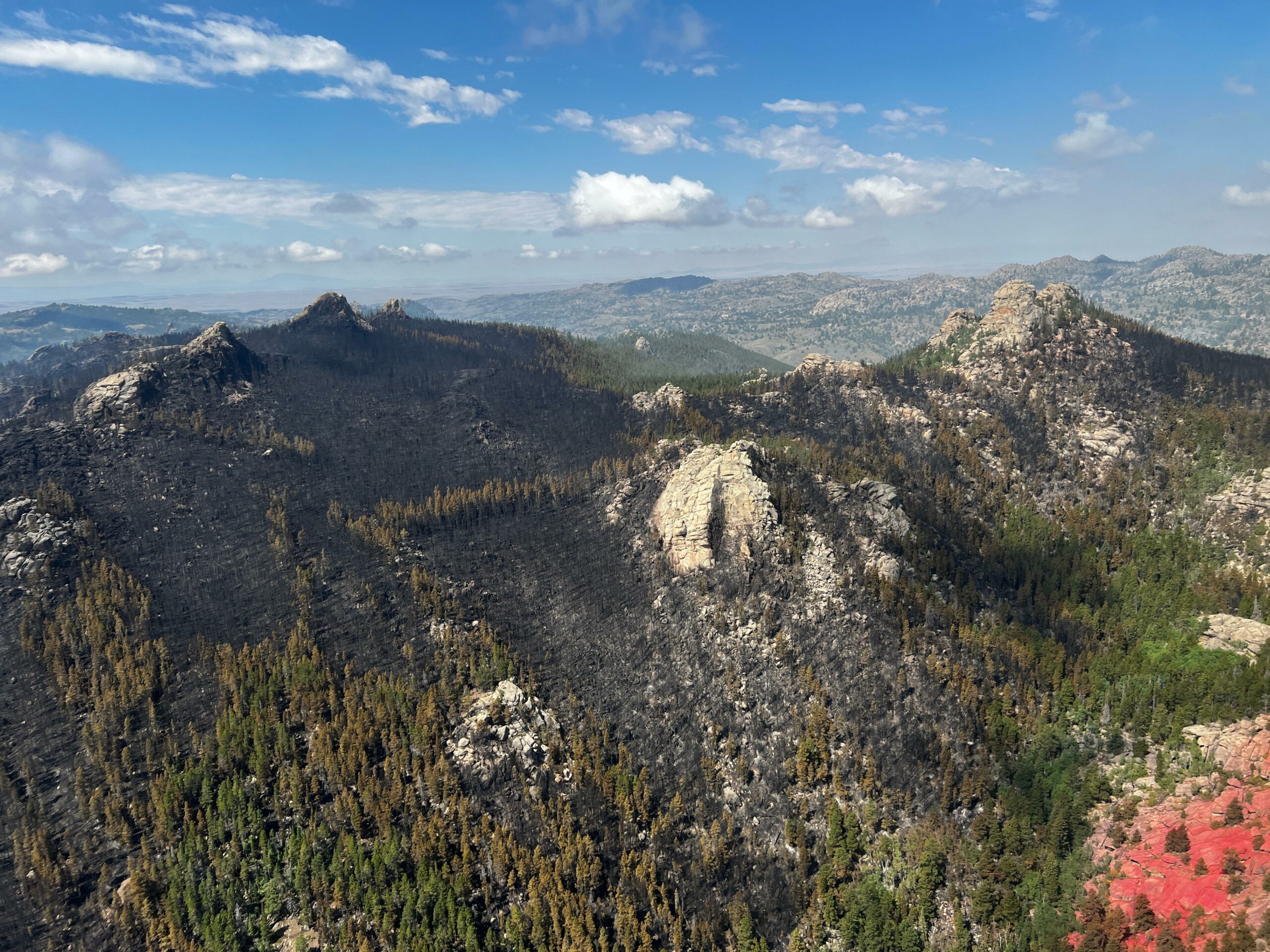 Site of the Sugarloaf fire, posted along with the incident report. (Medicine Bow National Forest/Inciweb)

CASPER, Wyo. — With drier weather moving into the area of the Sugarloaf fire in the Medicine Bow National Forest, crews expect to see an increase in smoke, according to a Saturday morning news release from fire managers. The fire is still 516 acres in size with 0% containment, and personnel are working to remove vegetation — which could act as fuel — from the south line of the blaze.

After seeing higher relative humidity, cooler temperatures and rain on Friday, crews fighting the Sugarloaf fire are preparing for drier conditions to move in within the next 24 hours. Showers and storms are expected to become more isolated, with “brief, heavy rain, hail, gusty outflow winds to 40 mph and dangerous ground lightning [to] remain a threat from any thunderstorms that pass over or near the fire,” InciWeb reported Saturday morning.

“Temperatures will be warming by 2 to 4 degrees a day through Monday with humidity levels dropping below 20 percent on Monday,” the release continued.

“Lighter fuels, such as grasses, will begin to dry out after several days of rain and higher humidity levels allowing them to burn more readily,” continued the release. Fire behavior is expected to remain minimal, with “creeping and smoldering in heavier fuels such as logs and stumps.”

A total of 360 personnel are fighting the fire, stated the release.

An evacuation notice remains in place for Bear Creek Road between the Garrett intersection and Friend Park, the forest reported. Pre-evacuation is in place for Friend Park and Fetterman to Garrett Ranch, and the American Red Cross shelter in Rock River remains closed.

Stage 1 Fire restrictions remain in effect for the Medicine Bow-Routt National Forests and the Thunder Basin National Grassland. A temporary flight restriction also remains in place over the area for both aircraft and drones. “Please remember, if you fly, we can’t!” said the release.

According to a Facebook post from the National Forest and Thunder Basin National Grassland, air resources are still being heavily utilized by personnel. While “mother nature has been providing her own air support in the form of rain showers and thunderstorms” and water drops from helicopters have not been needed over the past two days, helicopters and tankers have been supporting a number of missions around the incident.

Aircrafts deliver supplies to spike camps, which are located close to the fire and away from the primary base camp. They also support communication between firefighters by transporting valuable supplies like radio repeaters.

Additionally, the Facebook post continued, aircraft allow Rocky Mountain Complex Incident Management Team 3 to get a bird’s-eye view of the fire, assessing the fire’s activity and “where it wants to go.” The team can also use this view to understand features of the environment, like terrain and vegetation, to help them form realistic plans.

In the coming days, the team plans to “continue direct and indirect fire line construction,” assessing and protecting structures in Garrett Springs and along Bear Creek Road.

Those with information regarding the fire are encouraged to call the fire info line at 307-314-2244. If anyone has information on how the fire started, they can call the Forest Service Law Enforcement Tip Line at 303-275-5266.