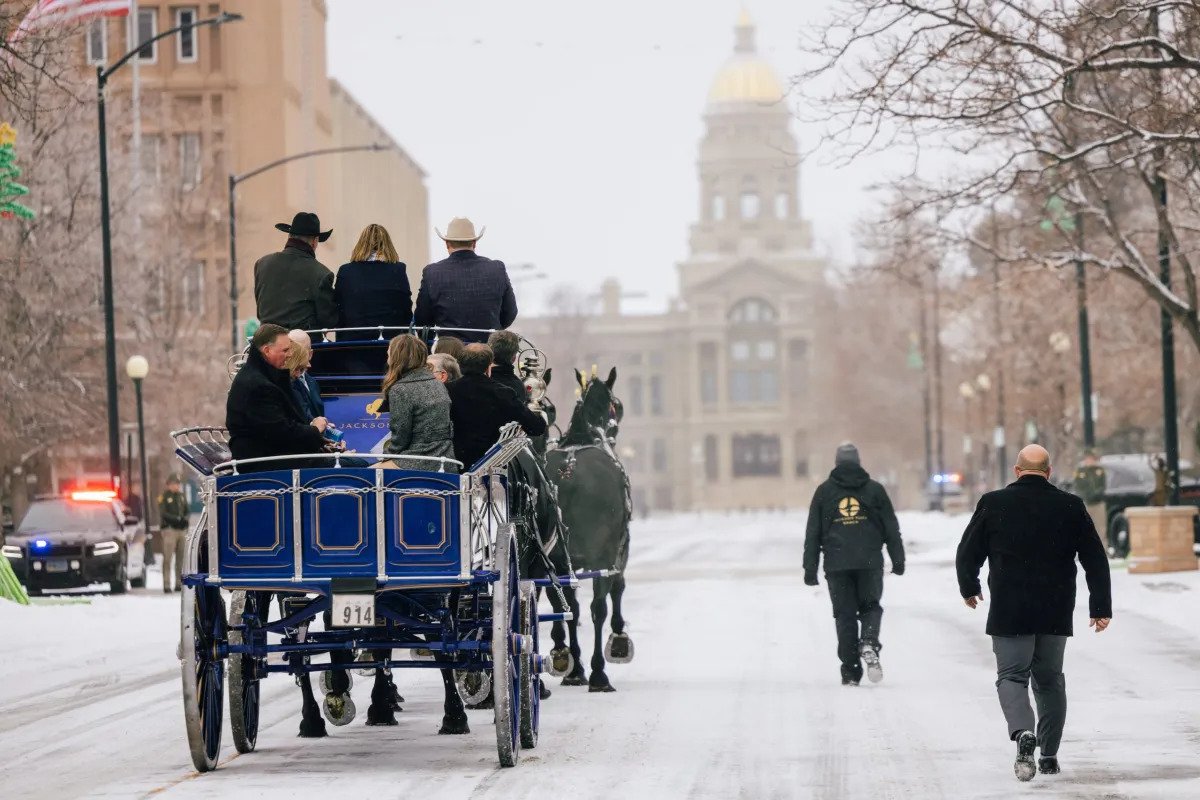 CHEYENNE, Wyo. — Though Wyoming’s five statewide elected officials were sworn in Monday, a handful of key positions in two of their offices remain vacant.

While some turnover is normal during a transitional period following an election, according to several officials, both the offices of state treasurer and secretary of state were unable to fill some top posts ahead of new terms that began this week.

“I don’t believe it’s any mystery that in practically every area of state government, we’re facing a lot of competition from the private sector and other areas and other state governments,” Wyoming State Treasurer Curt Meier told lawmakers during a September committee meeting.

Across the board, state government has struggled with an ongoing recruitment and retention problem. Roughly a quarter of Wyoming’s executive branch agency employees left their jobs between July 2021 and June 2022. To slow the bleeding, the Legislature approved a pay increase per Gov. Mark Gordon’s recommendation during the 2022 budget session — the idea being to bring wages closer to market value after trailing 19.4% behind. Pay alone, however, is not expected to fix the problem, according to staff testimony and surveys that describe a discouraged workforce. Now, retention and hiring challenges have crept into some of the offices for Wyoming’s five elected statewide officials.

Meier was re-elected in November after beating primary challenger Bill Gallop, who ran on Meier’s job performance. At the start of a second term, six positions in the treasurer’s office remain open including chief operating officer and general counsel. Some of those vacancies date back to Meier’s previous term.

In July, Deputy State Treasurer Dawn Williams told the Select Committee on Capital Financing and Investments the office was struggling to receive applicants — “let alone qualified ones” — for several accounting positions, including a principal accountant job and an accounting manager. Those two posts also remain vacant.

Lisa Jerde Spillman, then general counsel for the treasurer’s office, told the committee she would also be leaving the job for the private sector.

“I have a family of four. I make half the market wage,” Jerde Spillman said. “So I gave my notice. I didn’t want to do that but I have a family to [support].”

In 2019 the Legislature authorized a performance compensation program for treasurer’s office staff directly engaged in investing assets. Intended to improve recruitment and retention, the program has paid out $624,076 and $663,104 for fiscal years 2020 and 2021, respectively, according to a Legislative Service Office memo. The program is working, according to Meier, but excludes staff like Jerde Spillman. Outside of investment staff, the treasurer told lawmakers “we’re just not competitive” largely due to pay.

“We all want to watch our spending,” Gierau said. “But this is a case where we’re just so far behind the market in so many positions — and the treasurer’s office is just a highlight of it — that we really have to come to grips with.”

Gierau blames budget cuts and a legislative body that’s been averse to pay increases. He pointed out that Meier was once a part of that body as a longtime fixture of the Senate.

“But now that he’s on the other side, as a member of the executive side of the house, I think he’s seen what continual cutting and not staying up with the market can do,” Gierau said. One out of every four dollars of Wyoming’s general fund budget comes from the state’s investments, according to Gierau, who would like to see that number closer to one out of every three. Lawmakers have a vested interest to make sure the treasurer’s office is properly staffed, he said.

Meier did not respond to WyoFile’s request for comment.

Since Secretary of State Chuck Gray’s primary election victory, there have been 13 resignations in the office. That accounts for almost half of the average number of staff the office employed during the fiscal year 2021-2022, according to the most recent workforce report.

Four of the office’s five executive-level employees were among the resignations. They included Deputy Secretary of State Karen Wheeler, Election Division Director Kai Schon, Administration Director Andrea Byrne and Business Division Director Lisa Gonzales. Together, the four employees accounted for 119 years of service, according to a Dec. 12 Instagram post from the secretary of state’s office. Two of those positions remain vacant — Election Divisions director and Business Division director. On an interim basis, the assistant directors of each division will fill the roles, according to a Dec. 20 press release.

“While movement is a natural part of transition, we will continue the great work of the Secretary of State’s Office,” Gray said in the release. Wheeler, who spent 37 years with the office, told the Casper Star-Tribune the loss of so many executive members at once was unusual.

As the second highest office in Wyoming’s executive branch, the secretary of state has extensive responsibilities. Gray made “election integrity” his No. 1 priority on the campaign trail, which included questioning the effectiveness of the very office he sought. In June, when asked if he believed the 2020 elections were secure in Wyoming, Gray said, “the answer to that is that there’s tremendous problems.”

Monique Meese, who worked as former Secretary Ed Buchanan’s general counsel and chief policy officer, announced her exit in August. She cited Gray’s misinformed distrust of Wyoming elections as a reason for her departure, according to the Cowboy State Daily.

Gray has hired Joe Rubino to fill Meese’s position. After graduating from the University of Wyoming College of Law, Rubino was admitted to the state bar in September 2021. Since then he’s worked for the Casper-based law firm Williams, Porter, Day and Neville, where he’s been “learning on the job,” according to the firm’s website. Rubino is a nephew of U.S. incoming Rep. Harriet Hageman and worked on her 2018 gubernatorial campaign.

In his new state government job, Rubino is responsible for communications for the SOS office. He did not respond to several inquiries from WyoFile by press time.

Jesse Naiman, a Cheyenne-based attorney, has replaced Wheeler. Previously a senior assistant attorney general in the Wyoming attorney general’s office, Naiman began practicing law in Wyoming in 2015, according to the state bar directory. He worked on Hageman’s congressional campaign and has served on the executive committee for the Laramie County Republican Party.

The one executive-level employee who stayed on, Kelly Janes, will remain the Compliance Division director. Meanwhile, Kyndra Herrera and Micah Pfaffe will jointly fill the position of Administration Division director.

Along with Gray, Superintendent of Public Instruction Megan Degenfelder began her first term this week. She’s not new to the Department of Education — Degenfelder served as chief policy officer under former Superintendent Jillian Balow — and neither is her leadership team, which she named in a Dec. 29 press release.

“This leadership team, most of whom I have already worked with, comes with decades of experience both at the state department and in local school districts,” Degenfelder said in a statement. “This, coupled with my private sector experience, will allow us to most effectively hit the ground running on day one.”

As for the governor’s office, there was only one notable leadership change. As Chief of Staff Buck McVeigh announced his retirement, Gordon selected Drew Perkins to replace him. Perkins spent 15 years representing Senate District 29, serving as Senate president, vice president and chair of the Joint Appropriations Committee. He’s also spent more than 30 years as an attorney in private practice.

Aside from that switch, the governor’s office has been “remarkably stable,” according to Michael Pearlman, Gordon’s spokesperson.

“The stability is helping the governor make a seamless transition into his second term,” Pearlman said, pointing to multiple initiatives Gordon will carry forward such as the RIDE education initiative and the Wyoming Innovation Partnerships.

State Auditor Kristi Racines began a second term without any staffing changes, but she feels for her incoming colleagues who are dealing with staffing shortages and a brand new set of responsibilities. Turnover during a transition isn’t unique to being a politician or in state government, she said, but the fear of the unknown can be really intimidating, as it was for her and her staff during her first term.

“Nobody going into any of these jobs understands 100% what they’re getting into, for better or for worse,” Racines said, “It’s just like starting any new job.”