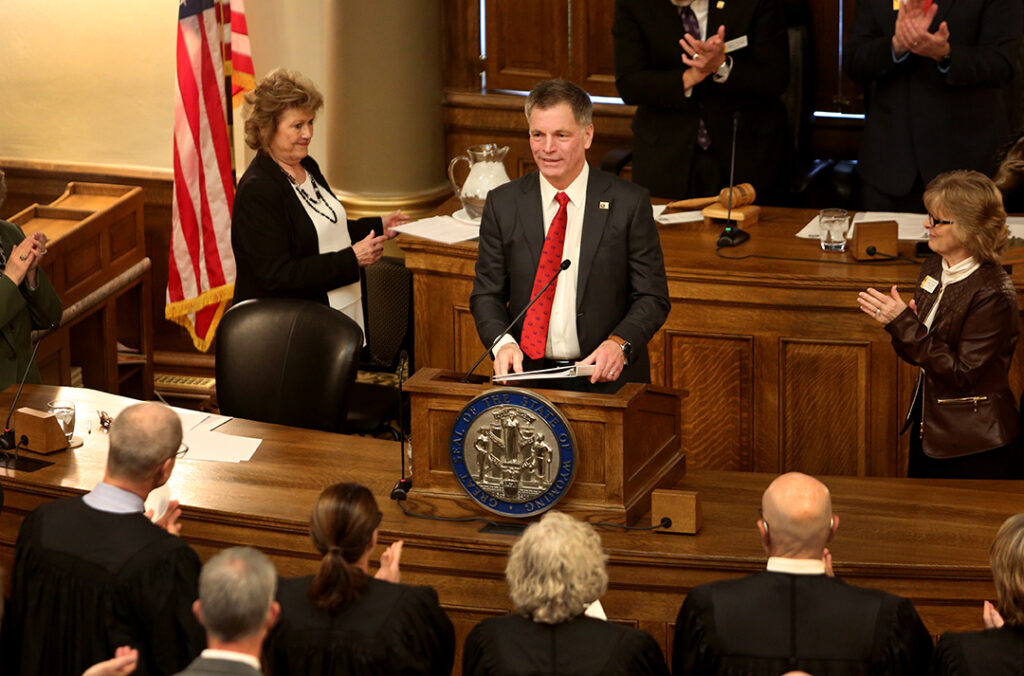 Wyoming Governor Mark Gordon is welcomed to the House Chamber during his 2020 State of the State address on Monday, Feb. 10, 2020, in Cheyenne. (Dan Cepeda, Oil City)

“[State] agencies have been instructed to cut as much as they can between now and June 30,” Kevin Hibbard, the director of the State Budget Department, told the committee on June 9. “We will make cuts either before July 1 or shortly after,” based on the agencies’ proposals, Hibbard said.

The governor’s office has not put a specific percentage on the July 1 cuts, but has warned that all told, one-fifth of agency budgets will need to be trimmed. In a press release announcing the coming cuts, Gordon ordered agency chiefs “to identify and explain programs to eliminate.” The cuts will “likely cost jobs” and could also include furloughs or pay reductions for state employees, Gordon said.

After this first round of cuts, agencies will continue to outline possible cuts of up to 20% of their budgets, Hibbard said. “We’re preparing for this on the pessimistic side,” he said.

The state faces a plunge in energy and other revenues that is projected to  wipe out $1.5 billion over the next two years. That number is equivalent to more than half the state’s most recently written two-year budget for the non-education side of Wyoming’s government. Lawmakers in early March passed a budget that spent $2.9 billion on general government for the next two fiscal years. The general government side is now projected to lose $1 billion in revenues, while the school funding side of the budget — which has separate funding sources — is projected to lose $500 million.

It’s likely some state employees will soon join the swelled ranks of the state’s unemployed. “As far as the body count, it’s going to be significant,” Hibbard said.

Former Gov. Matt Mead made the last round of abrupt budget cuts in 2016, when mineral revenues suddenly plunged. At that time, the state slashed 311 positions, Hibbard said. The vast majority of those positions were already vacant, however. “Most likely this [cut] is going to have significantly more positions than what we did in 2016,” Hibbard said.

The governor is focused on cutting government programs, Hibbard said. Cuts to programs cost jobs outside of government too. The 2016 cuts were estimated to cost almost 700 private sector jobs among companies that contracted with the state, particularly the Wyoming Department of Health.

The state’s long term fiscal picture is even more uncertain.

Lawmakers’ prolonged reluctance to diversify the state’s tax system away from the energy industry increases fiscal uncertainty, analysts say, as the energy industry faces fundamental shifts — and in the case of coal, sustained declines. Despite that, both state lawmakers and the federal government are moving to bolster the fossil fuel industry with tax breaks that will cost Wyoming still more revenue.

The Trump administration cut federal mineral royalty rates to provide relief to oil and gas companies. Half those royalties are returned to the states where the resource extraction occurs, which could mean another hit to Wyoming’s coffers. The Bureau of Land Management has provided royalty relief to Wyoming operators, but “so far that relief has not been widespread,” LSO fiscal analyst Don Richards told the appropriations committee.

But further royalty cuts or broader use of the program by companies operating in the state could strip as much as $300 million more out of state budgets, Richards said.

The Legislature has not set a date for a new special session to act on such measures, or take budget action itself. Last week, legislative leaders polled House and Senate members about whether they wanted to convene anew at the end of June, as leaders had proposed at the end of the May special session.

In a June 11 letter, Senate President Drew Perkins and Speaker of the House Steve Harshman (both R-Casper), said the poll indicated lawmakers weren’t ready to return. Legislative “committee work to date has not resulted in additional COVID-related bills that require legislative action prior to July 15,” the leaders wrote in the internal letter that was obtained by WyoFile.

Gordon has the ability to make substantive cuts without the Legislature weighing in. Lawmakers could later evaluate his cuts, replace some of the lost spending or cut more.

Fiscal analysts for both the legislative and executive branches say that making cuts at the beginning of the budget cycle is better, because it keeps money proposed for spending available for use elsewhere. The same is also true of bringing in new revenue streams, the analysts say.

So far, however, there is little movement on raising state revenues — something which would almost certainly require action by the Legislature.

At the Joint Revenue Committee’s first meeting, the committee found itself split and did not advance any draft bills to shift the state’s tax burden away from the energy industry.