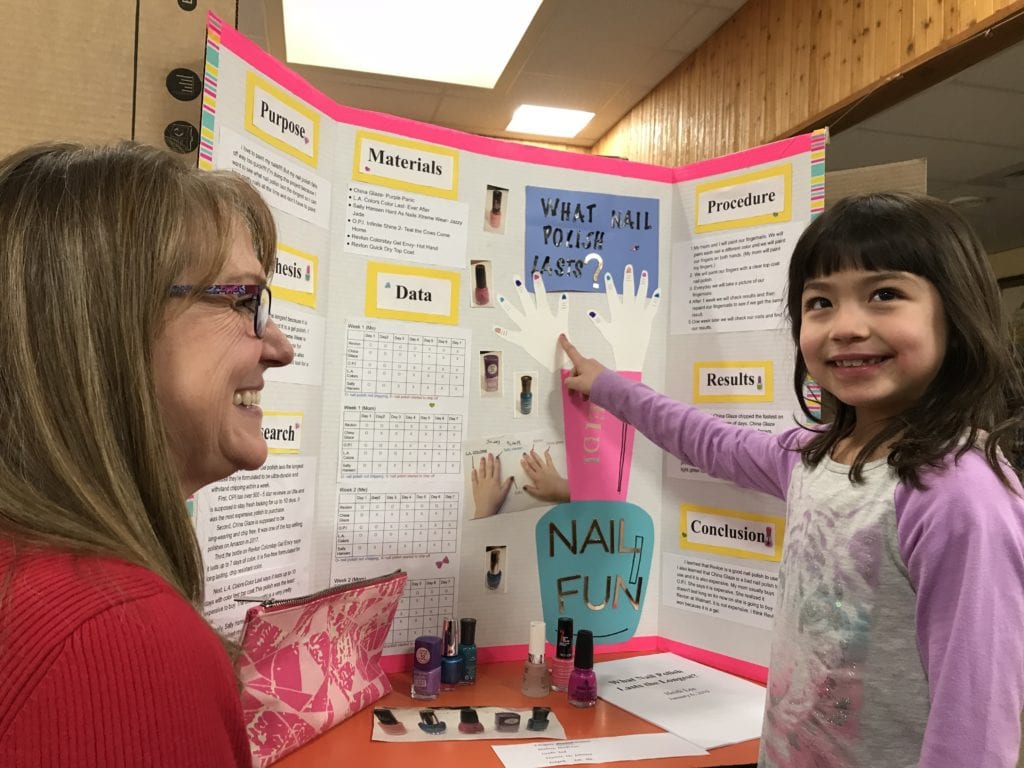 The CMSP is a Natrona County School District funded intiative that “allows students to expand their knowledge of science in an outdoor setting,” according to their website.  Jacobs says that she and Long come act as judges at any school that wants.

“We just volunteer to judge,” she said. “It’s fun to hear the kids and their ideas, especially the little ones.”

Students from across the district take field trips to CMSP’s location at Camp Sacajawea on Casper Mountain in the fall and spring. They’re preparing to train new interns who will lead some of the activities. The new interns arrive in February to prepare for the science program’s spring activities.  Some Oregon Trail teachers have responded particularly well to CMSP and said some of their fifth graders will go up the mountain to help the new interns get some teaching practice.

While Jacobs and Long were listening to students talk about their science fair projects, some of the Oregon Trail teachers told Oil City that CMSP has really strengthened the science curriculum at their school.

“The kids love to go up there,” said fifth grade teacher Jarrod Johnson. “It’s helped with more hands-on stuff. We get a double dip in science on whatever standards we’re trying to meet.”

“Some of the kids hadn’t even been up the mountain before,” Johnson added.  “I just like providing them with experiences they never get. It sticks.  It allows [students] to make connections with the classroom.”

Jamie Corrigan, who tutors across grades at Oregon Trail, said she’s seen science fair projects get stronger since the school started participating in the CMSP.

“Once we started with the program on the mountain, we’ve seen the science program get more and more involved,” she said. “It’s fun to watch the kids’ projects grow. They get a little more in depth each year.”

“It’s really fostering that love of asking questions,” she continued. “As teachers we really want them to ask questions. Science is something we do every day. I think this fosters life long learning.”

“It’s free for our district,” he said. “Teton is so expensive. It cost us something like $2,700 extra to take two buses up there.”

“I think it is excellent for our kids,” he said.

The Oregon Trail school library was full of student projects on Friday, including one that hovered over the table, lifted up by a bunch of oversize balloons.  Until one balloon popped.

“We had a few tears when that happened,” Corrigan said. “Her project was asking how many balloons you’d need to lift a person off the ground.”

She went on to explain that CMSP encouraged Oregon Trail to place a stronger emphasis on science and that this has had a positive effect on all kinds of students.

“Even our struggling students can be involved in this,” Corrigan said about the science fair. “The little guys even took control of it. We’re measuring more things because we’re asking more questions. [CMSP] made science more of a priority at Oregon Trail.”