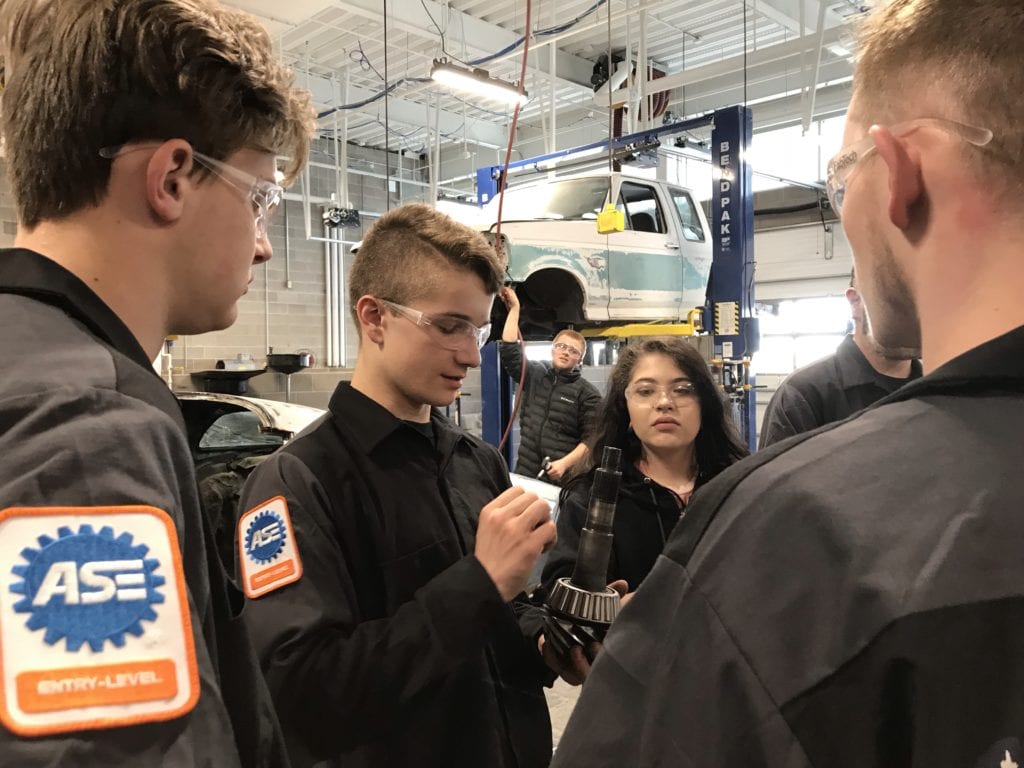 Students in a Pathways Innovation Center auto class in February 2019.

Pathways Innovation Center auto program students were fixing up and decking out a car and truck for auction on Tuesday, Feb. 12. Auto class instructor Troy Corson said his class received a Wyoming Department of Education grant and used the funds to purchase a 1977 Camaro.

Corson said the class is also working on a 1997 Ford Truck with a 7.3 liter diesel engine. Once the students have finished working on the vehicles, they’ll auction them off and use some of the money for their next project. The students will also select a charity to donate some of the proceeds from the auction.

On Tuesday, the students were working on the axle system of the Camaro. Corson said they’ll also be installing air conditioning and putting in a high performance suspension system. They’ll then paint the car using the new paint system recently installed in the garage-style classroom space.

Corson said he has four classes working on the vehicles. He designates specific roles for students just as if the class were a real auto shop. Trystan Knapp stepped up as head foreman on Tuesday because the student who usually performs these duties was home sick.

“I always try to have them doing something,” Knapp said of his fellow students. “I try to keep them busy.”

Knapp said he got involved in the program because he likes working on engines. He also spoke highly of the program’s ability to give him a number of certifications that will help him if he goes into the automotive industry.

“I took auto over at NC (Natrona County High School) and it doesn’t come near to this,” Knapp said. “If you can get into Pathways, do it.”

Corson explained that his students can get up to nine different certifications in the two year auto program. That includes an Automotive Service Excellence entry level certification that Corson said is essential in the industry. After students pass the test, they get to wear a Pathways Auto jacket with their ASE certification patch sewn into the sleeve.

Pathways Assistant Principal Ron Estes said the auto program is getting stronger and that companies in Casper like Westech had hired some of last years graduates.

“We’re going to rock it out,” Estes said he said of Pathways. “This year we’re going full stream. We’re looking to expand.”

Estes and Corson both said that the hands-on learning was something that really energized the students. Corson added that making his classroom as professional as possible was the best way to get the students prepared for further education and their future industry.

“They really dig the hands-on,” he said. “It’s run just like a shop. It’s the way it works in the real world in there.”

Knapp, the acting shop foreman, said that the students learn a lot from one another.

“It’s one big cooperation process,” he said. “I’ve learned stuff [from classmates], especially about the axles.”

He added that receiving his ASE certifications was difficult but thought it would help him in the future.

“That was probably one of the toughest tests I’ve ever done,” Knapp said before directing his safety supervisor to come speak with Oil City.

“I’m the safety guy,” said Pathways student Matt Bryant. “I just make sure no one’s being dumb, make sure they’re wearing safety glasses, stuff like that.”

Bryant said that he’d rebuilt the transmission on one of his own vehicles in the Pathways shop. He said the ability for students to work on their own projects at Pathways really appealed to him. He also praised his instructor.

“Corson?” Bryant began. “He’s a lot more knowledgeable. He helps you by sort of making you figure out how to solve a problem on your own.”

Corson said that he’d worked for 15 years in the auto and diesel industry. He’d also acted as an assistant coach in the Marine Corps. He said that his class also got support from companies like Casper Auto and Wyoming Automotive, adding that students ordered all the industrial parts themselves through NAPA.

The auto program, like the Pathways construction program, also co-ordinates with programs at Casper College.

Corson said that the vehicles the class was working on would probably be finished in the fall semester. He said that people could keep track of the progress the students were making by checking out the Pathways facebook page.