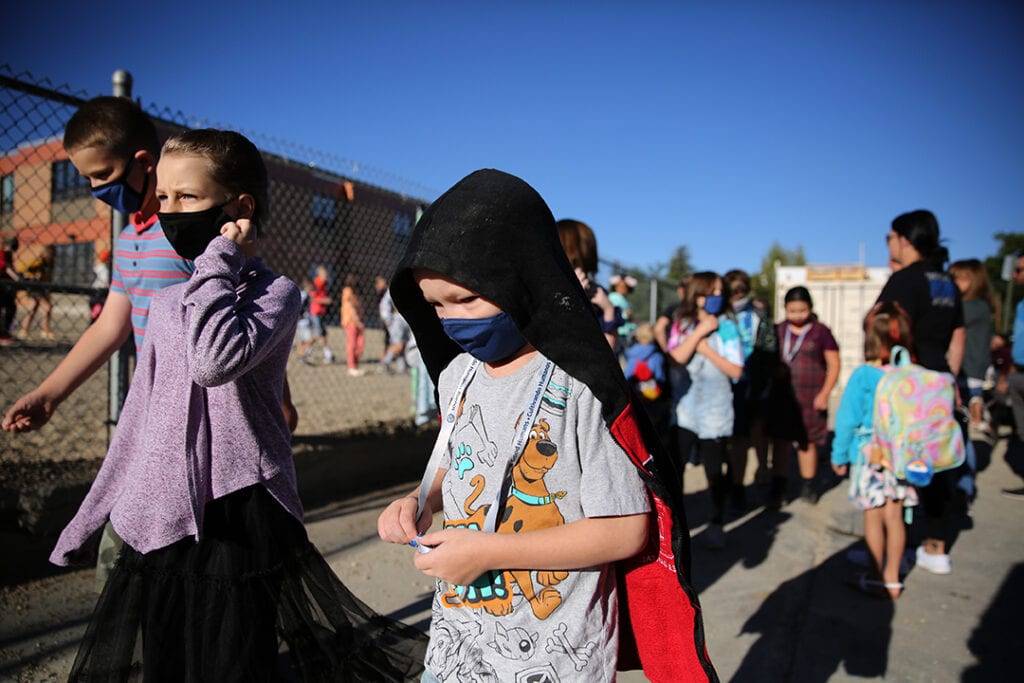 CASPER, Wyo. — The Wyoming Legislature’s Select Committee on School Finance Recalibration have identified a $515 million funding gap for K-12 education based on revenue projections as the state deals with the COVID-19 pandemic and a struggling energy sector.

With the state facing such shortfalls for education funding, some are looking for new ways to generate revenue. The Wyoming School Board Association (WSBA) have proposed a one-penny sales tax that would generate revenues for the state’s School Foundation Program Account.

“Regularly assessing an additional one penny sales tax would generate
approximately $150 million in additional revenue for public education in Wyoming,” the WSBA says in a list of Delegate Assembly resolutions.

The WSBA Board of Directors recommend that the one penny sales tax proposal be adopted by the WSBA’s Delegate Assembly as part of their formal “advocacy agenda.” However, the WSBA notes that the proposal is something which “should be considered by the entire Delegate Assembly and debated.”

The Natrona County School District Board of Trustees discussed the idea during their Monday, Nov. 9 work session. Trustee Clark Jensen said he thought the proposal was too narrow and specific since the sales tax revenue would be directed only toward K-12 education.

He said that legislators may have more information about the state’s overall situation and should have the ability to direct funds more flexibly.

“They aware of not just the school issues but all issues the state faces,” he said.

Trustee Kevin Christopherson said he thinks it should be left up to the legislature to find a way to solve the school funding deficit.

“I think this is one of the simplest ways that we can get some more revenue,” she said. “We are one of the lowest taxed populations in the country. To me it is almost a no-brainer.”

Trustee Debbie McCullar also supported the proposal. She said she liked the fact that revenues generated from the sales tax would be tied directly to education spending.

“I am for this resolution because it does go to education,” she said. “$150 million would really help that deficit that we are facing.”

Trustee Kianna Smith said she didn’t like the idea of a sales tax as a way to generate revenue. She said sales tax can hurt small business and consumers.

“In the long run it is not a good way to solve the problem,” she said.

He neverteless said that “it may be necessary at some point to raise taxes to support education.”

Chair Rita Walsh agreed that the approach should be left up to the legislature.

Trustee Ray Catellier said that he was a “little disappointed” that the WSBA hadn’t offered other alternative suggestions for the legislature to generate revenues for school funding besides the sales tax proposal.

For that reason, he said he would not support this specific proposal, but would support the legislature or WSBA finding other ways to generate K-12 funding streams.

“I think they could go back to the drawing board and give a better recommendation to the legislature,” Catellier said.

The proposed resolution notes that the state “faces a chronic budget crisis impacting the ability of school districts to provide an adequate and proper education for students.”

The proposed resolution says that “the Wyoming Legislature is required to fund and maintain a thorough and efficient system of public schools, adequate to the proper instruction of all youth of the state.”

The Wyoming Legislature’s Select Committee on School Finance Recalibration as school districts in October to consider how a 16% reduction to their guaranteed state funding would impact operations.

The Natrona County School District Board of Trustees discussed what a 16% budget reduction would do during their Oct. 26 work sesson.

“A sixteen percent (16%) reduction to NCSD’s block grant would be approximately $31.52 million and would have a significant impact on the ability of NCSD to provide students with an equitable and proper education,” a draft letter from the NCSD Board of Trustees to the committee stated. “A reduction of this magnitude would necessitate NCSD to reduce educational programs, increase class sizes, layoff personnel, extend the purchasing cycle of curriculum materials, eliminate course offerings, and much more.”

“A budget reduction of this magnitude would require NCSD to eliminate 331 full-time certified positions or 384 positions (combination of classified and certified staff).”

The WSBA’s proposed resolution says that “funding the budget deficit solely by a reduction to school district funding would result in a significant fiscal impact on school district operations that would severely compromise school districts’ ability to provide the required level of education.”

The proposed resolution says that Wyoming would still have a lower sales tax than most states in the region if the an additional one-penny sales tax were implemented.

“This increase in revenue for education will allow the State of Wyoming to decrease the deficit for education, while allowing the State to maintain a quality education program as required by the Wyoming Constitution,” the proposed resolution says.

Should the WSBA adopt the resolution as part of their advocacy agenda, the propsed resolution says that the WSBA would lobby for the one-penny sales with members of the legislature.

“While few desire more taxes, limited measures that are specifically designated for school funding may be preferable to the severe cuts that would be warranted as the sole solution to the budget deficit,” the proposed resolution adds. “A recent study by the Wyoming Legislative Service Office illustrated how Wyoming compared with its surrounding states in a variety of taxes.”

“It is obvious from the data provided that an increase in the statewide sales tax will generate the most revenue of the other taxing options. A portion of
that revenue would be generated from non-Wyoming residents, sharing the burden with out-of-state visitors. Additionally, increases to property/ad valorem taxes would take 18 months before they generate revenue to the School Foundation Program Account, while revenue from sales and use tax would be available within 30 days.”

The proposed resolution adds that the one-penny sales tax could be discontinued if the state’s revenue outlook improves and the funds are no longer needed.

“The additional one penny sales tax should be directed to the State’s School Foundation Program Account, not the State’s General Fund,” the proposed resolution argues.