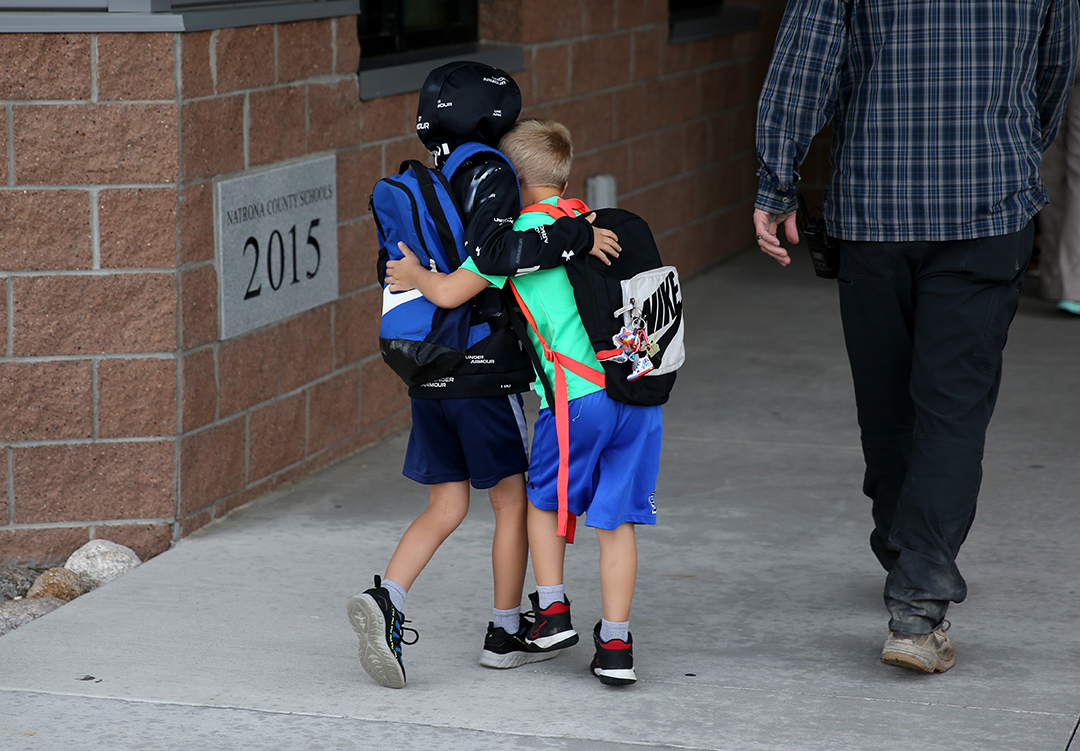 Students walk to class during the first day of school at Lincoln Elementary School in Casper. (Dan Cepeda, Oil City)

Less than two weeks after opening their doors, school officials around Wyoming are finding that hygiene protocols and mask and vaccine recommendations may not be enough to prevent COVID-19 outbreaks and keep students in classrooms.

School districts in Teton, Albany, Sheridan and Laramie counties have enacted masking requirements within the past two weeks despite fierce opposition from many parents and despite entering August with expectations that in-person classes could resume without them.

Just two weeks after in-person school started, Hot Springs County School District #1 opted to move all classes online for the next two weeks rather than impose a mask mandate following a surge of COVID-19 infections and exposures among students and staff. All school sports activities there have been sidelined as well.

“It’s disappointing to be in a digital instruction period this early in the school year,” HSCSD #1 Superintendent Dustin Hunt wrote in a letter to parents and district staff. “But unfortunately numbers of students and staff infected with COVID-19, or under quarantine orders, has reached the threshold of needed separation.”

In Sheridan County, some parents pulled their students from in-person classes rather than comply with a temporary mask mandate imposed during an Aug. 30 emergency meeting, according to the Sheridan Press. Some teachers were suspended for defying the mandate.

“We are in a situation where we have major concerns with the COVID cases, which in fact will result in the number of quarantines that our students are going to have to do,” Sheridan County School District #2 Superintendent Scott Stults told trustees at the emergency meeting. “When we choose to put masks in place, we are absolutely reducing the number of students or staff that have to be quarantined.”

Nearly 500 students and at least eight staff members at Laramie County School District #2 have been asked to quarantine after less than two weeks of in-person classes without a mask mandate, according to LCSD #2. Most of those quarantined were for potential exposure rather than confirmed cases. However, confirmed COVID-19 cases spanned at least 17 schools in the district. The district reported 83 confirmed positive COVID-19 cases among students as of Sept. 2.

Eighty students and staff at Big Horn County School District #2 were asked to quarantine after the first week of school, prompting complaints about quarantining measures. Western Wyoming Community College implemented a 30-day mask mandate, while a mask mandate at the University of Wyoming remains in place until at least Sept. 20. Officials instituted a mask mandate for all school districts on the Wind River Reservation before classes began.

Some districts, including LCSD #2 and Fremont County School District #1, have declined to enforce a federal mask requirement on buses, which was one probable source of transmission that led to about one-third of quarantines in Laramie County schools, according to LCSD #2 Superintendent Justin Pierantoni.

Memorial Hospital of Sweetwater County announced this week it has canceled elective surgeries “as a result of an overwhelming influx of COVID-19 positive patients.

“The hospital is treating and admitting more and more COVID-19 cases every day,” MHSC Public Information Officer Deb Sutton said in a press release. “There has been an incredible surge in cases nationwide. We are not an exception. This comes at a time when MHSC, like other U.S. hospitals, is facing a nursing shortage, as well as limited access to bed availability in regional centers for higher levels of care.”

Hospital officials throughout the state, including in Cheyenne, Casper and Sheridan, have similarly reported increasing numbers of COVID-19 patients and attendant strains on staff and resources.

The Wyoming Hospital Association has urged all healthcare workers in the state to get vaccinated for COVID-19 to help hospitals manage the surge. There is almost no regional capacity to send critical patients out of state, according to the organization.

“There’s no capacity, there’s nowhere to place [kids] into the surrounding states, because all of their pediatric beds are full,” Hospital Association President Eric Boley told Wyoming Public Media. “So it’s about the most perfect storm you could get right now … lack of staffing, high demand and then new cases with pediatric patients.”

“Starting around the first of July, our numbers of children that became infected with COVID have gone up significantly,” Emmons said. “In fact, we’re back up to the level we were in about October of last year, which was when we started the surge.”

That’s directly attributable to the Delta variant being a greater risk to young people, she added.

“Very rarely did we have kids in the hospital prior to that time [July 2021],” Emmons said. “Since then we’ve had kids from birth to 18 who’ve been hospitalized.”

Because of national vaccine approval guidelines, kids in the U.S. remain the most unvaccinated segment of the population.