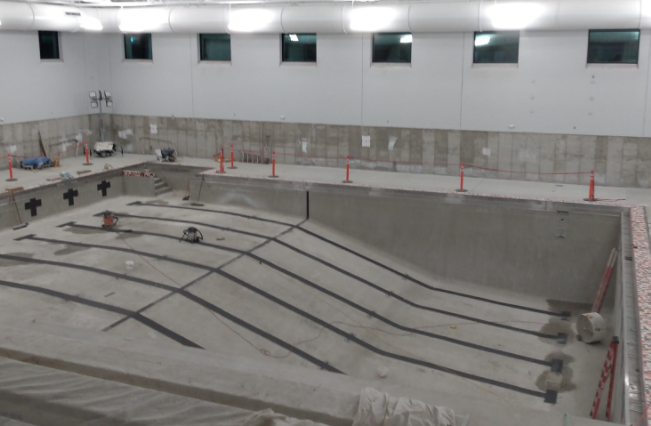 CASPER, Wyo. — Several parents complained to the Natrona County School District Board of Trustees on Monday about what they perceive as a lack of focus on teaching students the basics of reading and mathematics.

Some of the parents said that NCSD should not be spending money on athletics facilities such as the ~$10.2 million Natrona County High School natatorium or a proposed $3.75 million tennis facility if students are struggling with basic academic skills.

Jensen acknowledged that some children are struggling to acquire sufficient reading skills but argued that this is the fault of parents and not teachers and the school district.

“If a parent isn’t supporting their kids, no teacher can fix that,” Jensen said, adding that he thinks the “breakdown in society is bigger than the breakdown in the school system.”

Jensen added that he thinks the NCHS swimming pool as well as the proposed tennis facility project are justified on grounds that extracurricular activities lead to student success.

“I want to point out that swimming pools and tennis courts are not a detriment to learning,” Jensen said. “Kids who participate in extracurricular activities have higher [academic] performance than those that don’t.”

Jensen argued that offering quality athletics facilities helps pull students into the classroom and find success there. He added that he views athletics and activities as “part of a well-rounded education.”

“I do believe extracurricular activities keep [students] in schools,” she said.

Walsh added that as a former teacher who completed a master’s degree focused on instructing students how to read, she does not think the problem with kids’ reading levels is the fault of teachers. She said she thinks teachers are working “very hard” to help students learn how to read.

Walsh added that one of the district’s strategic goals is to get all students to be reading at grade level by grade three. She acknowledged that this is a goal that can’t always be successfully reached but said that “it is one that we hold very dear.”

Walsh said that if students are going to successfully acquire reading skills, it is paramount that parents play a role in that learning process.

“We need your help,” she said.

During the school board meeting on Monday, Jensen also provided updates on infrastructure projects within NCSD. He said that the NCHS pool facility is close to being finished, adding that the pool tanks have been tested for tightness and no leaks were found.

Jensen said the target date to officially open the pool is October 15 and that the district is tentatively planning a grand opening ceremony for the first week in November.

He added that the pool project is on budget with about 18% of contingency funding spent. The roughly $700,000 NCHS elevated walkway project to connect the main building to the Mustang Athletic Community Center is also on schedule and on budget.

Jensen said that the district is also tentatively preparing to accept proposals from firms interested in designing the proposed tennis facility that would be built at Highland Park starting October 20.

That project would involve renovating existing City of Casper–owned courts at the park and building some new courts in order to facilitate both NC and Kelly Walsh tennis practices and competitions.

Jensen noted that the tennis facility project still awaits approval of a Memorandum of Understanding from the Casper City Council since the existing tennis facilities are owned by the city. With the city council having expressed support for the proposed project, Jensen said that the NCSD Board Infrastructure Committee is anticipating that the MOU will be approved.

He said that some new project requests that have come before the infrastructure committee include projects to install better visitor stadium seating at NCHS’s Dick Cheney Alumni Field and a request from Kelly Walsh to upgrade the press box at Harry Geldien Stadium.

Sagewood and Pineview Elementary School are both hoping to secure funding for projects to expand their facilities, Jensen said. No decision has been made on any of the proposed infrastructure projects.