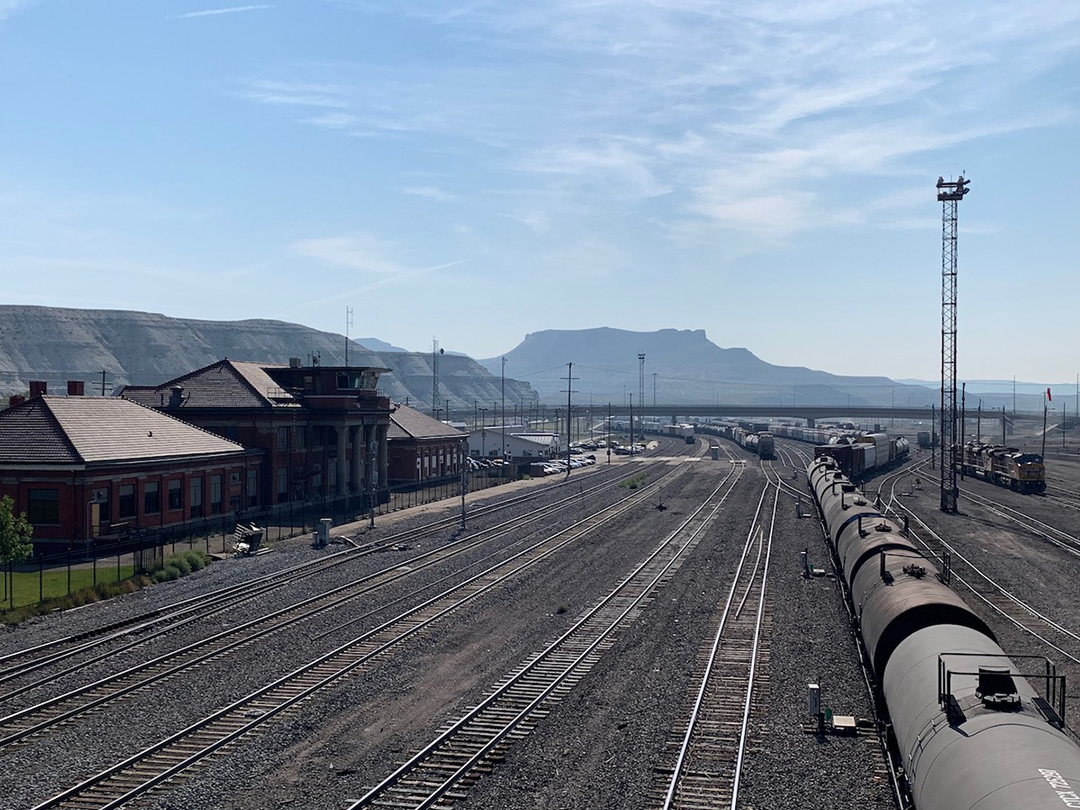 A view of the Green River railyard in September 2021. (Dustin Bleizeffer/WyoFile)

The move comes after some complained about a lack of state-level involvement in the competitive grant processes that require applicants to demonstrate regional coordination to qualify for the federal funds.

“We’ve taken that very much to heart because that is our role: to be able to provide that support and collaboration,” Wyoming Energy Authority Program Director Anja Bendel said. “So we’re taking a much more visible, active role.”

Wyoming, the nation’s largest coal producer, ranks high among coal regions targeted by the federal stimulus programs, according to federal officials. Coal mining, which has helped buoy state revenue for decades, and is a primary funding source for K-12 and secondary education, has been in decline for more than a decade marked by a series of coal company bankruptcies and layoffs beginning in 2016.

The state and its communities stand to reap sizable grants under a $3 billion Department of Commerce initiative to help “communities around the country not only rebuild but reimagine their economy for the future,” according to Commerce Secretary Gina Riamondo. Within that effort, the U.S. Economic Development Administration this summer launched a $300 million Coal Communities Commitment program to revitalize “hard-hit” coal and energy communities.

Some of the federal initiatives include a first-phase competitive grant deadline of Oct. 19. Winners could receive $200,000 to $500,000 for technical and coordinating efforts. Those winners may apply for larger grants — $25 million to $75 million — in March to begin putting their plans into action.

Both state and local economic development officials said they’re rushing to meet the Oct. 19 and other upcoming deadlines to qualify for larger grants. Some communities, including Campbell and Sweetwater counties, say they have proposals that have lingered for years that — as they are updated — should be prime contenders to qualify under the federal programs.

Plans to diversify Campbell County’s fossil-fuel-extraction-centric economy still hinge on coal and the industrial service sector that’s developed around mining, oil and gas for more than 50 years. But rather than being solely dependent on extraction, leaders plan to build upon the momentum of ongoing efforts to create a new “carbon economy” via carbon capture-sequestration-and-utilization technologies and coal-to-products manufacturing.

Campbell County leaders have envisioned a large industrial and manufacturing park on 250 acres located just east of the county’s sprawling Cam-Plex multi-event complex. Pronghorn Industrial Park would cater to emerging industries that local and state governments have been working to incubate for years through efforts such as the Integrated Test Center — home to the Carbon XPrize competition — and the Wyoming Innovation Center, which is now under construction.

“Whether you’re mining 300 million [tons of coal for power plants] or 50 million for different products and product streams, you’re still going to have the industry service jobs and some mining,” Campbell County Commissioner Rusty Bell said. “But what you’re going to end up having more of are those specialized manufacturing jobs.”

What’s needed to implement the carbon economy vision in Campbell County are large-acre sites where companies can easily connect to water, power and other services, Bell said.

The county will apply for $11.3 million in federal stimulus grants for the industrial park, and offer up a $2.8 million cash match, according to local officials. Gillette Mayor Louise Carter-King said the city is eager to extend water, sewer, power and fiber optic infrastructure to the location.

“The structural declines in the thermal coal market require Campbell County to quickly diversify its economic base, moving to a broader focus on technologies and industries that can add value to our significant carbon portfolio,” the county stated in its draft grant application for the proposed industrial park.

Energy Capital Economic Development has partnered with a public-private institute that advocates for projects to convert coal into products on another grant application. That application speaks to broader, region-wide efforts to qualify for the federal stimulus funds, Energy Capital’s Phil Christopherson said.