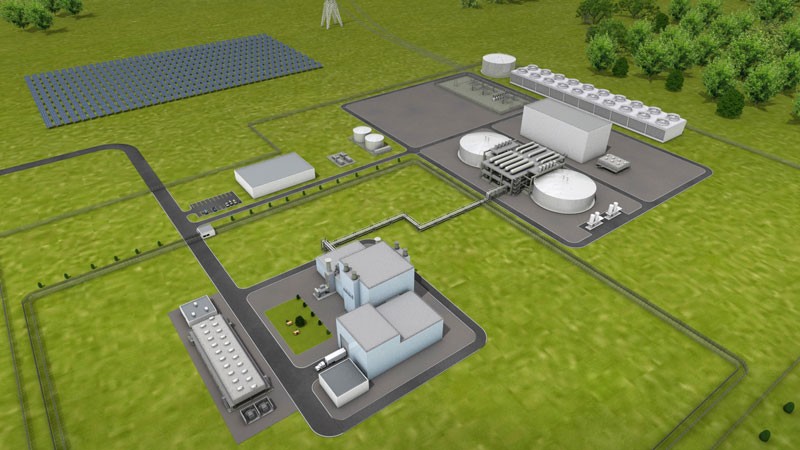 CASPER, Wyo. — After TerraPower announced that Kemmerer, Wyoming has been selected as the preferred site for the new Natrium nuclear reactor demonstration project, TerraPower and Rocky Mountain Power leaders provided further details during a press conference based out of Cheyenne on Tuesday.

TerraPower President and CEO Chris Levesque began by noting that the Natrium team evaluated four sites in Wyoming before selecting Kemmerer as the third site for the reactor demonstration project. The other three include Gillette, Rock Springs and Glenrock.

Rocky Mountain Power (a division of PacifiCorp) President and CEO Gary Hoogeveen said that the other sites could all potentially be candidates for future nuclear reactors. Levesque said that TerraPower thinks that if the Natrium demonstration project gets permitted by the Nuclear Regulatory Commission (NRC), utilities like RMP will be interested in getting further projects started and more projects could begin before the first Natrium reactor goes online.

The Natrium reactor that TerraPower and RMP want to build near the Naughton Power Plant in Kemmerer could be online in as soon as seven years. Levesque said that on-site work wouldn’t begin for another three years — until NRC approval is secured.

Levesque said that the total cost of the first Natrium demonstration project is expected to be around $4 billion, about half of which will come from U.S. Department of Energy grant funding. Levesque noted that the price tag is expected to be highest for the first plant and that TerraPower does not expect to profit off of the demonstration project.

Hoogeveen, when asked how the Natrium plant would impact electricity rates for ratepayers, said that “the quick answer is that it is the lowest cost option that we have to go forward.” He noted that PacifiCorp has included the 500 MW initial Natrium project in its most recent Integrated Resource Plan (IRP) that outlines the utility’s planned energy portfolio over the long-term. In addition to the 500 MW from the Natrium demonstration project, PacifiCorp includes “an additional 1,000 MW of advanced nuclear over the long-term” in its IRP. With this plan updated every two years, Hoogeveen said that PacifiCorp could potentially add plans for more nuclear in coming years. He said that the utility’s inclusion of the Natrium project in the IRP is a sign that PacifiCorp believes the technology can produce electricity at competitive rates.

The Natrium demonstration plant is expected to feature a 345 MW sodium-cooled fast reactor with molten salt-based energy storage. Levesque noted that the plant will have storage capacity that will enable utilities to store power from renewable sources like wind and solar. In total, TerraPower said the Natrium demonstration plant will have the ability to output 500 MW of power when needed, enough to power around 400,000 homes.

Levesque said that the technology will help as energy demand rises around the world and as societies transition to electric vehicles.

Levesque noted that TerraPower has received substantial grant funding from the DOE and said that he thinks there is support within both major political parties in the county for advanced nuclear. He noted that Wyoming’s U.S. Sen. John Barrasso has pushed legislation that aims to have the NRC conduct review and permitting of nuclear projects on a timeline that works better for the industry.

TerraPower included a quote from U.S. Secretary of Energy Jennifer Granholm when announcing that Kemmerer had been selected for the Natrium project.

“Just yesterday, President Biden signed the Bipartisan Infrastructure Deal and today DOE is already putting it to work with more than $1.5 billion heading to Wyoming,” Granholm said in the release. “The energy communities that have powered us for generations have real opportunities to power our clean energy future through projects just like this one, that provide good-paying jobs and usher in the next wave of nuclear technologies.”

Levesque said that there are over 300 engineers already working on the Natrium demonstration project and that the number would double in 2022 as the Natrium team prepares to apply for a construction permit with the NRC in mid-2023.

People in Wyoming will have the opportunity to participate in some meetings that are part of the regulatory process as the project advances, according to Levesque.

In addition to the plant itself, Levesque said that the Natrium team are looking at ways to work with the state to develop supply chain solutions as well as education programs at both the University of Wyoming and community colleges for the future of nuclear.

“I think there is a lot of room for many winners in Wyoming,” Levesque said.

He said that once a construction permit is secured, the new plant would need a roughly 2,000-person construction workforce and that developers will work with the local community to accommodate that.

Hoogeveen and Levesque said that there is also interest in relying on people working at the Naughton Plant near Kemmerer as workers for the planned nuclear reactor, with the Naughton Plant planning to retire two coal units in 2025.

Levesque said that the team will be developing a simulator to help train coal workers on the skills they will need on the Natrium plant and that this simulator can be used to demonstrate workers’ skills to the NRC.

Proponents of the new Natrium technology hail it as an advancement that could help meet energy needs in a more sustainable, environmentally friendly manner. Detractors have said that the technology as proposed for development is not really a step up from existing nuclear technology. Casper College will be exploring whether the Natrium technology will be a benefit for Wyoming during a presentation set to take place on Tuesday, December 7.