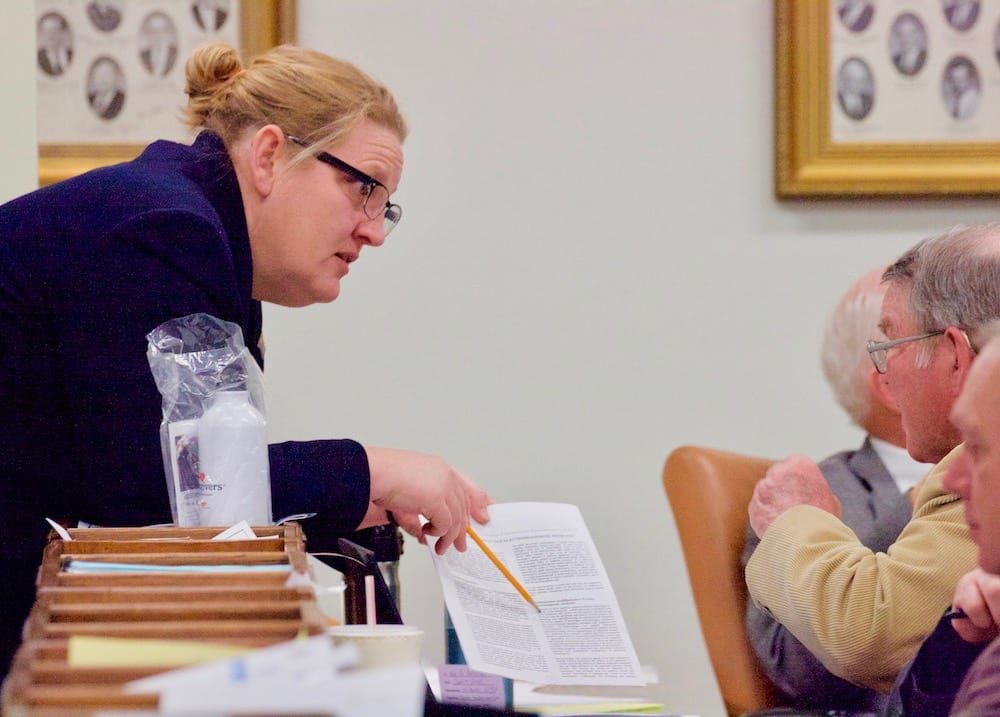 Rep. Sara Burlingame (D-Cheyenne) an LGBTQ advocate and freshman lawmaker, speaks with Rep. Tim Hallinan (R-Gillette). Burlingame is a cosponsor on legislation to create protections from discrimination in hiring and firing for people based on sexual orientation and gender identity. (Andrew Graham/WyoFile)

The Wyoming Republican Party and a wealthy conservative donor are opposing a bill that would protect workers from discrimination based on sexual orientation and gender identity — adding those qualities to existing protected classes like race, sex and creed.

The bill passed the House Revenue Committee 5-4 this morning, squeaking under a deadline for committees to release legislation to the chamber floor.

House Bill 230 – Enhancing quality employment law is limited in nature, proponents said. It applies merely to hiring and firing practices and is not a statewide anti-discrimination statute that would affect interactions between private businesses and their customers.

The bill makes it illegal to hire, fire or discriminate against an employee in “matters of employment” like compensation based on their sexual orientation or gender identity.

In social media posts and in emails, the Wyoming Republican Party asked its members to tell lawmakers to oppose the bill. A wealthy political donor from western Wyoming who supports far-right candidates, particularly in Republican primaries, is also opposing it.

The party’s opposition was expressed directly to the committee Friday.

“The ambiguity in the law will in fact allow abuses by activists,” the party’s Executive Director Kathy Russell said.

Tensions between lawmakers, even among those opposed to the measure, again showed as the party pushed one of its major initiatives — blocking protections for LGBTQ people. The party lists limiting the ability of voters to switch political affiliation before primary elections as its highest priority for the session.

Last year, party leadership tied campaign funding to votes against a bill it had condemned that created an air-service subsidy. Rep. Cyrus Western (R-Sheridan) asked Russell if the party would punish lawmakers based on this issue.

“If Republicans do end up supporting this will the party take punitive measures toward those members come next elections?” Western asked.

Russell couldn’t answer Western’s question because the party’s State Central Committee would be in different hands by the next election, she said.

“So you’re saying that there is a possibility that the party will take punitive measures?” Western pressed.

“That is not what I’m saying,” Russell said. “I can’t say anything. I have no knowledge.”

In an email sent to all 90 Wyoming legislators, Daniel Brophy, a Wilson resident and wealthy donor to conservative causes, also urged them to vote against the bill.

“The fact is that any anti-discrimination law discriminates against somebody or some group in favor of someone else or another group,” Brophy wrote. “Special protections for any group diminish the rights of everyone else not in that group.”

Over the last two election cycles, Brophy has spent broadly on right-wing challengers to moderate Republicans in the Legislature. In communications to lawmakers, he has shown particular interest in LGBTQ issues.

In 2014, lawyers from the Wyoming Liberty Group represented Brophy in a case against the Wyoming Secretary of State. Brophy’s case stopped the state from enforcing a $25,000 aggregate limit on how much individuals could spread among campaigns for state office.

This election cycle, Brophy and his wife spread $44,500 among primary candidates. There is a $1,500 cap on individual donations in state campaigns. By combining the couple’s donations they could give a candidate $3,000, a significant sum for many Wyoming statehouse races. He also donated a significant sum to a political action committee that supported gubernatorial candidate Harriet Hageman.

Brophy worried that providing a legal remedy for gay Wyoming residents discriminated against in hiring or firing could open the door to more groups claiming a protected class.

The bill includes an exemption for discrimination in hiring practices by religious organizations. Defined as “expressive associations,” the exemption means organizations that are not for profit and primarily focused on religious teachings can discriminate on the basis of sexuality or gender identity.

In explaining the exemption, the bill’s proponents said it was an attempt to alleviate fears that the legislation could be used to persecute people based on their religious convictions.

“The biggest concern has been the religious conviction aspect, and I think there’s merit there,”  Rep. Tyler Lindholm (R-Sundance) testified.

“At the same time … as government is supposed to do, we’re protecting the rights of those that can’t protect themselves,” Lindholm said.

Chief sponsor Zwonitzer called the bill a small step towards protections for Wyoming’s LGBTQ workers and said it was far narrower than previous attempts to extend protections into discrimination laws for commerce, housing and other areas.

“This really just deals with the fact that you shouldn’t be discriminated against in your job or fired … for anything other than your work ethic,” Zwonitzer said.