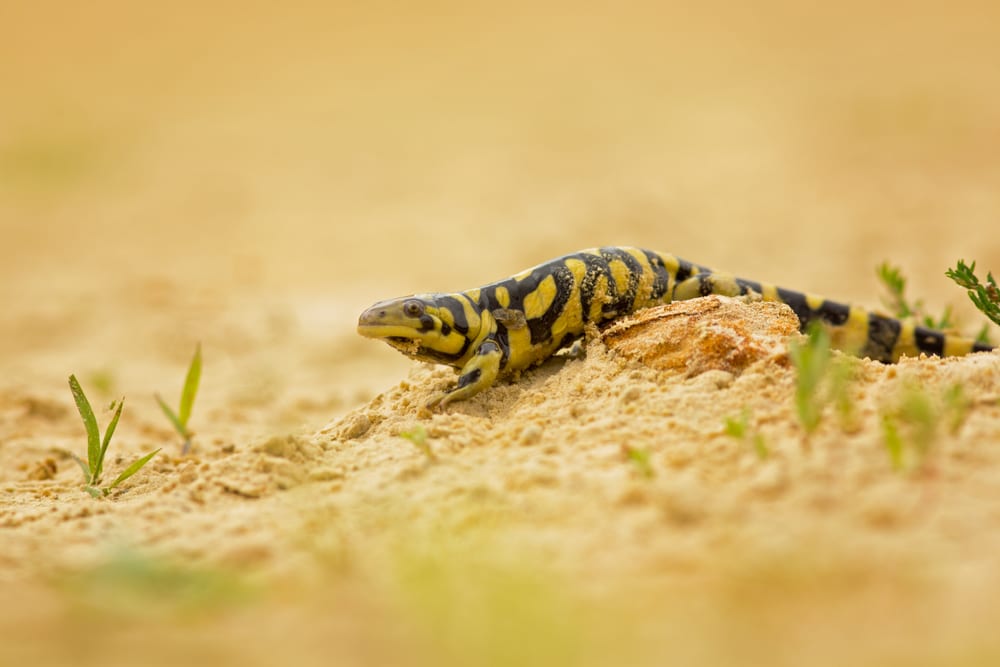 A bill moving through the Wyoming Legislature would name the blotched tiger salamander as the official state amphibian. Bill SF 50 passed on second reading in the House Friday, Feb. 8. But an amendment to the bill could be added at the third reading Monday, Feb. 11.

The bill’s sponsor, Lander Senator Cale Case, and the Pathfinder High School students who asked him to draft it, say it should be passed—without amendments.

The students took notice of a proposed amendment that would make the blotched tiger salamander the state salamander rather than the state amphibian. They promptly addressed an email to legislators protesting the amendment on Friday.

The students pointed out that the same is true for other state vertebrate classifications adding that the Western meadowlark was named state bird in 1927, the bison state mammal in 1985, the cutthroat trout state fish in 1987 and the horned toad state reptile in 1993.

“With regard to Wyoming’s vertebrates, we do not believe it would be a good idea to open a vertebrate sort of Pandora’s box,” their email continued. “We truly believe that the blotched tiger salamander is distinguished in its ability to thrive in Wyoming and in its contributions to so many Wyoming ecosystems. It should be recognized above and beyond its fellow amphibians for those distinctions.”

Case said he agreed with the students.

“That would be a terrible precedent,” he said of the proposed amendment to the bill. “It should be one species representing each class.”

The students’ science teacher Dr. Chip Woolwine said that there is only one salamander species in Wyoming. When his class started studying vertebrates during the 2017-2018 school year, it came to their attention that Wyoming had not designated a state amphibian.

“Wait a minute, there’s no amphibian!” Woolwine said, adding that his students then started looking for a candidate. “To our surprise we found that there was only one salamander.”

Woolwine said the students thought it was the right candidate for state amphibian for several reasons.

“It literally blankets the state,” he said, adding that another candidate, the Wyoming toad, was located in only one Wyoming county. “It is also an indicator species. As the salamander goes, so goes the environment. If you begin to see drops in its population, that would be an indicator that something is wrong.”

Case agreed that the students had landed on the right candidate. He added that a game warden found a live blotched tiger salamander while crossing the street and brought it to the bill’s hearing in the Senate.

“It’s range is almost identical with the state’s borders,” the senator said of the salamander. “These are tough critters. If you see a salamander [in Wyoming], it’s a blotched tiger.”

Director of the Wyoming Natural Diversity Database Dr. Gary Beauvais explained that the blotched tiger salamander is a sub-species of the tiger salamander species. He said that the species thrives in wetlands but is common all over the state.

“It can stay in its aquatic form and reproduce in the aquatic form,” Beauvais explained. “The thing I always thought was so interesting about that salamander is that you can find them both in the most crystal clear mountain water or in muddy water in the middle of a landfill.”

The Pathfinder students found another fan of salamanders while they were lobbying for the bill on a field trip to Cheyenne. Woolwine said that after they’d delivered their arguments at the Legislature, the students got called over to Governor Mark Gordon’s office.

“We were talking to the governor,” Woolwine told Oil City. “He said, ‘Man I love salamanders! When I was a kid we had buckets of them.'”

Woolwine said that if the bill makes it to the governor’s desk, his class would like to be there for the signing.

“If the governor agrees to sign it, we’re going down there,” he said.

Case and Woolwine both said the students had put a lot of work into the effort and were learning a lot about both science and the legislative process.

“We’re not just doing this on a lark because it’s warm and fuzzy,” Woolwine said. “There’s a lot of hard science behind this.”

“[Woolwine] and his students have just done a great job in coming up with this idea,” Case said. “I love his class. They’re learning about all these processes that go into a bill becoming law.”

Woolwine added that getting the senator’s support meant a lot to him and his students.

“Even when he was in [the country of] Georgia, he was communicating with our kids by email,” Woolwine said of Case.

Case said that the bill could still face a long road if the amendment passes on Monday. That would force the bill back to the Senate for a concurrence vote since the bill needed to pass in the same form in both the House and the Senate.

The students emphasized their opposition to that amendment in their email.

“After over a year of diligent study, our conclusion has been that ambystoma mavortium melanostictum  (blotched tiger salamander) should be our representative for all of Wyoming’s wonderful amphibians: seven toads, four frogs, and ONE salamander,” they wrote.