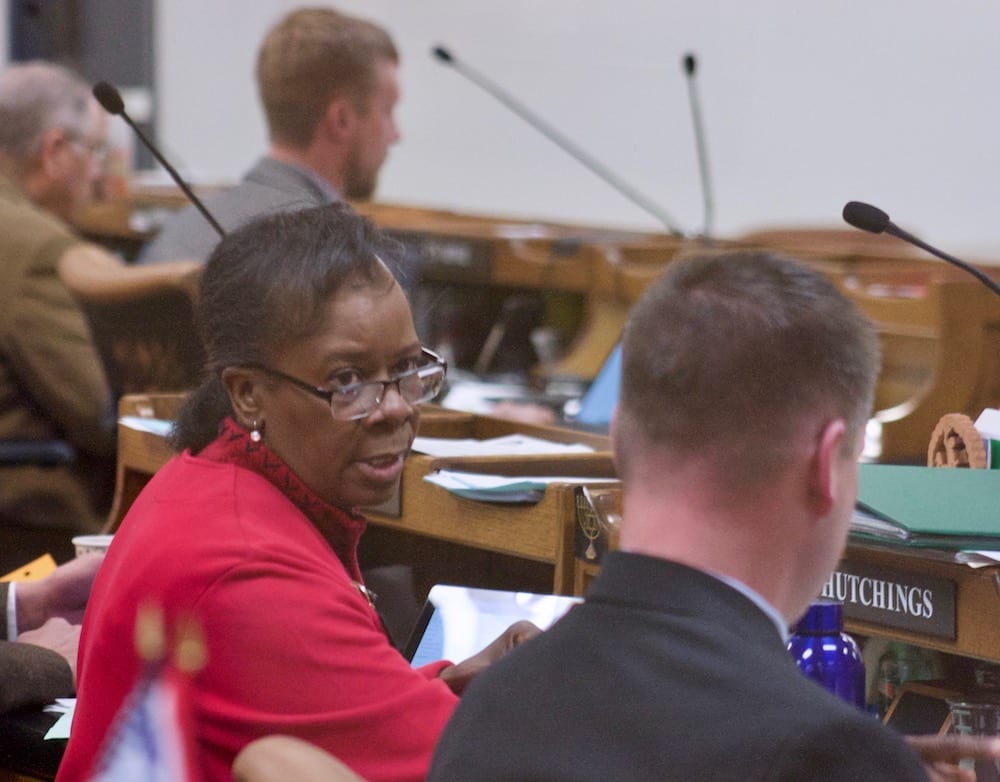 Sen. Lynn Hutchings (R-Cheyenne) sits in the Senate chamber on Monday morning. The senator, accused of making inappropriate remarks to high school students, declined to speak at length with WyoFile but said the reports were “not true.” (Andrew Graham/WyoFile)

Students from Cheyenne’s Central High School approached their senator, Republican Lynn Hutchings, because they wanted to lobby for protections against job discrimination based on sexual orientation.

They were confounded when Hutchings seemed to want to talk instead only about pedophilia, bestiality and the act of sex itself, three of the students said.

“I felt very angry because this is not the conversation we came to have at the Legislature,” one 17-year-old student told WyoFile. “We came to talk about a bill.”

The students and members of the Gay-Straight Alliance, a high school club, were participating in “Civics Day” at the Legislature as part of a conference of GSA clubs from across the state. In consultation with Liz Edington, the Central High School teacher who sponsors the students’ club, WyoFile has agreed not to name the students because they are minors.

WyoFile interviewed three students separately, one via phone on Friday evening, one via text message on Saturday and a third via phone on Monday. WyoFile confirmed with Edington, who chaperoned the students’ visit, that they were present for the conversation with Hutchings

Hutchings conflated homosexuality with pedophilia and bestiality in the Feb. 1 conversation and offered graphic hypotheticals to illustrate her point, according to the students and Edington.

“It was really upsetting to think that she legitimately equates who I am to people who are pedophiles or commit bestiality,” a 15-year-old member of the group told WyoFile.

The LGBTQ advocacy group Wyoming Equality filed a complaint with Senate President Drew Perkins (R-Casper) on Feb. 4 that documented the remarks, then distributed the complaint on Feb. 8. The complaint received statewide news coverage over the weekend and was covered by the tabloid the New York Daily News.

In a brief interview in the Senate hallway Monday morning, Hutchings said the story reported over the weekend is not true. Reporters’ negligence had led to her receiving “death threats,” she alleged.

“All weekend long from all over the country people have been calling me,” she said.

“This is vicious,” she said. “It’s life threatening.”

Hutchings declined to interview further about the incident and suggested she would take legal action. “This has gone legal now,” she said.

Perkins declined to comment on the complaint, saying he couldn’t speak about specifics under legislative policy. In a Monday afternoon statement from Perkins and other Senate leaders, Perkins said the Management Council will be processing the complaint.

“In the coming days, we will continue through the process designed to properly vet and address complaints filed against Members,” the statement read.

On Feb. 4, staff at the Legislative Service Office told Wyoming Equality the Senate president would review the complaint and speak with Hutchings, according to representatives of the advocacy group. When the group followed up on Friday, they were told Perkins had received all the materials and would be responding to them. The group had not heard a response by mid-morning on Monday, they said.

The students had visited the Legislature for Wyoming Equality’s GSA Civics Day, a bi-annual event, according to the advocacy group’s complaint. They went to the Senate lobby to speak about House Bill 230 – Enhancing quality employment law. The bill added sexual orientation and gender identity to race, political affiliation and other classes protected from discrimination in employment practices. House Bill 230 died Feb. 4 when it was not brought up for debate on the House floor before a deadline.

On Feb. 1, Hutchings spoke to a group of students that grew from five people to nine over the course of the conversation in the hallway outside the Senate chamber at the temporary Capitol building, one of the students said. Their ages ranged from 15 to 17, with just one 18-year-old, one of the students interviewed by WyoFile said.

“I initially sent her a note only because she’s my district’s senator,” one student told WyoFile via text message. “I was pretty sure she was against the bill.”

In the Capitol, lobbyists and constituents can send notes into the House and Senate chambers to invite lawmakers out of the chamber to talk. The chambers are closed to the general public.

When Hutchings came out to speak with the students, they explained the bill to the senator. But Hutchings turned the discussion to sexual behavior, they said.

“She then asked if her sexuality was to have sex with all the married men in the room,” the student wrote. “We told her that sexual orientation isn’t about specific people, just the gender of people you’re sexually attracted to.”

WyoFile also reviewed a letter from Edington that accompanied the complaint but has not been made public by Wyoming Equality. In the letter, Edington says the students asked Hutchings to speak with them about the bill.

The three students also said that was what they heard Hutchings say. She invoked descriptions of pedophilia and beastiality more than once in the conversation, they said.

After those remarks, the students sought to emphasize the difference between sexual orientation and sex to the senator, they said.

“We tried to explain that… sexual orientation is a relationship between two consenting adults,” one student said. “We also tried to say that this is a workplace and that wouldn’t be professional.”

The conversation remained civil throughout but Hutchings didn’t seem to listen to them, two of the students said.

“She always brought the conversation back to sex although we were trying to steer the topic towards equal rights and protections for everyone,” one said.

Hutchings asked how an employer would know their employee’s sexual orientation, the texting student wrote. The students gave examples “such as a woman mentioning her wife,” she wrote. Hutchings then gave a hypothetical example of an employee at a store talking about his sex life to a customer, the student wrote, and implied it would be logical to fire him.

“We told her that would fall under employee misconduct, and that’s not what we meant,” the student wrote. The other student agreed.

When a complaint is made against a lawmaker, it is handled by the leadership of the legislator’s respective chamber, Perkins said. LSO staff investigate the complaint and visit with the complainants.

Then lawmakers talk through the complaint and look at the relevant law and statute. If the chamber chooses to proceed further with the complaint, the Legislature’s Management Council would form a subcommittee to investigate, Perkins said.

“The only way you discipline a legislator is through the body as a whole,” he said.

But, “legislators do have immunity under the speech and debate clause under the [Wyoming] Constitution,” Perkins said.

On Monday at noon, Perkins issued a statement endorsing a diversity of viewpoints, and a “civil exchange of ideas” in the Wyoming Senate. The Senate president is not a foe of LGBTQ protections. He was a cosponsor on HB230.

“The Wyoming Senate is a wonderful institution entrusted with crafting the laws of this state through the informed and civil exchange of ideas,” Perkins wrote. “The Senate is made up of a wide array of Members representing a people as diverse as the Wyoming terrain; a people of varying beliefs, goals and visions for the future. As the Senate President, I am dedicated to maintaining the long tradition of the Senate as an institution where Wyomingites can respectfully express ideas to their citizen Senators and receive the same level of respect in return. I welcome all residents to the Senate and encourage everyone to share their thoughts with us all.”

“Let us be clear, the message from the Wyoming Senate is this — all Wyoming citizens are welcome here,” the second release said. “We want to hear from you. We need to hear from you.” The Senate leaders are taking “the concerns raised on behalf of these students very seriously,” they wrote. “Absolutely no one should be made to feel dismissed, disrespected or degraded.”

Meanwhile, the Wyoming Democratic Party called on Hutchings to resign. “Her remarks were not appropriate for any audience, but that she said this to children is especially revolting,” party Chair Joe Barbuto said.

The three students and their teacher said they hoped for a strong response from their elected leaders.

“Students often feel like their voices are dismissed because of their age,” said Edington. In this case, “this is kind of compounded by the fact that many of them are either allies or members of the LGBTQAI+ community,” she said. “I would hope that our state leadership listens to their voices and replies with compassion and thoughtfulness and would even consider inviting a conversation with these kids.”

In a long day spent pushing lawmakers to vote for a bill that many opposed, as did the Wyoming Republican Party, the interaction with Hutchings was the only negative moment, one of the students said.

“We did have other civil disagreements with other legislators,” she said.

But, “we were able to have civil discourse and it was a good way for us to interact with our legislators, even though we didn’t agree with them on everything.”

Though the bill ultimately died, the student “was grateful for the insight and experience into how our government works and the way we make laws,” she said. The student hoped to receive an apology from Hutchings, but didn’t think it would happen, she said.

“I don’t necessarily want Lynn Hutchings to lose her job,” the student said. “It would be beneficial because the way she treated us was not OK, but I don’t want to wish anyone anything bad.”

Another student was firmer. “I don’t think this will happen,” she wrote in a text message, “but I hope that she gets impeached for the inappropriate things she said to children in a professional setting.”

A third student also asked for Hutchings to be held responsible, without specifics. “I just want her to be held accountable in some way,” she said.

The incident comes in a year that the Legislature’s leadership removed protections for lawmakers, legislative staffers and members of the public based on sexual orientation and gender identity, along with all other protected classes, from its internal discrimination and harassment policies.

“We are deeply concerned about the lasting damage Hutchings has inflicted on the GSA students in her district and the reputation she has established for the Wyoming State Legislature,” the group wrote.