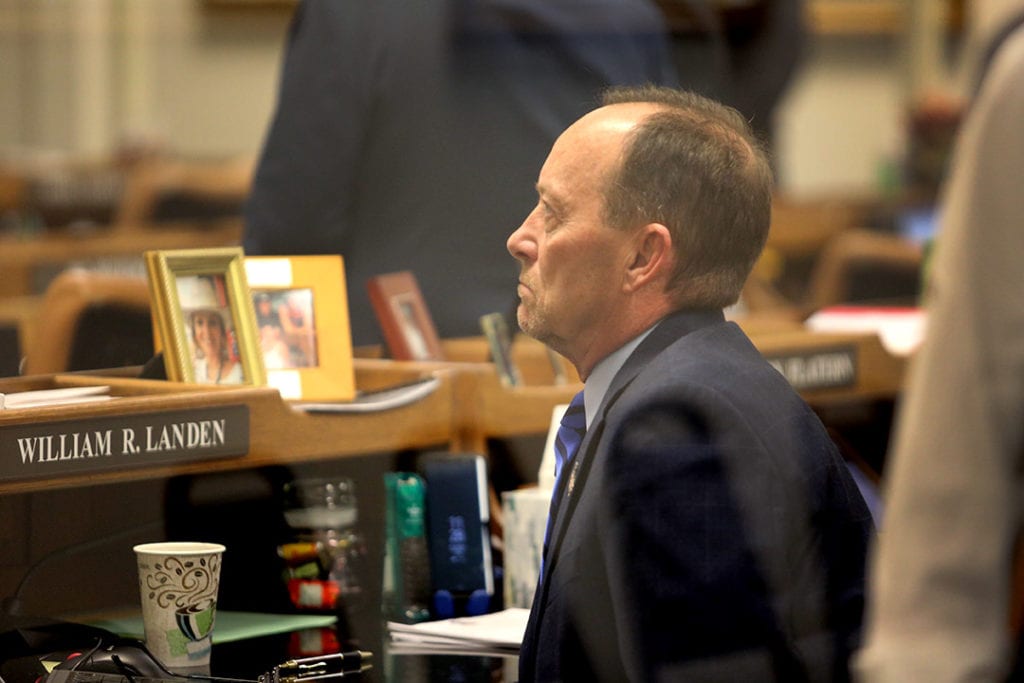 Sen. Bill Landen, R-Casper, sits at his desk before the start of the first day of the 2019 Wyoming Legislature session on Jan. 8, 2019, in Cheyenne. (Dan Cepeda, Oil City)

Simmering opposition to a corporate income tax pushed by leading lawmakers came to a boil last week when corporate lobbyists and lawyers joined Republican party activists to bash the measure at a Senate committee hearing.

The Valentine’s Day hearing brought lawyers in well-tailored suits worried about corporate bottom lines together with tea-party-style conservatives galvanized by fears of a scheme to impose broader income taxes — a specter pushed by the Wyoming Republican Party.

The Senate Corporations, Elections and Political Subdivisions Committee delayed a vote on House Bill 220 – National retail fairness act until Tuesday but took three hours of public testimony, nearly all of it opposed to the bill.

House Bill 220 would raise money for Wyoming schools by imposing a 7 percent income tax on publicly traded corporations that do business in Wyoming’s retail and hospitality sector — corporate restaurants like Applebee’s and retailers like Wal-Mart. Because of a provision added to Wyoming’s Constitution in the 1970s, supporters say, the corporations would be able to credit the sales and property taxes they pay against the new income tax.

Sponsors of the bill argue national corporations pay income taxes in their headquarter states and spread those tax costs to all their customers including those in Wyoming.

The bill’s author, Rep. Jerry Obermueller (R-Casper) said national pricing means Wyoming shoppers and diners pay a “hidden tax” at corporate stores. He characterized his bill as a correction on big corporations that have been taking advantage of Wyoming — making a profit in some cases by grinding down local businesses with the competitive advantages of national distribution and pricing. And he urged lawmakers not to be bullied by the lobbyists on hand, a few of whom had arrived in Cheyenne to represent national tax policy and business groups.

“We should not let the one percent stall the 99 percent,” Obermueller said. Speaking before public testimony on the bill, he called for a “Wyoming first” tax policy and gently teased the argument that imposing HB220’s limited corporate income tax would wreck Wyoming’s business friendly reputation.

“We’re touted as the most business friendly state in the nation by national publications and think tanks,” Obermueller said. “We would certainly welcome any of the businesses that are here tonight … to move their home headquarters to Wyoming.”

The tax would target companies with more than 100 shareholders.

Comparing corporations profiting from Wyoming consumers to an extractive industry, he said that “Wyoming, in a lot of respects, gets treated like it’s a colony.”

Perkins found the amount of corporate lobbying against the bill to be “incredibly interesting,” he said, given that he did not believe the tax would have a strong impact on the huge companies. He also suggested some of the outside experts slamming the bill — one writer for a corporate-backed “think tank” smeared Wyoming Republicans as acting like “Washington Democrats” in Forbes Magazine — might hurt their own case.

“They act and treat us like we’re country rubes and I think a lot of people resent it,” Perkins said.

The bill is estimated to raise $45 million a year, but Wyoming Department of Revenue Director Dan Noble cautioned lawmakers that is a very rough estimate. It was not just a “SWAG,” the cheeky abbreviation for a Scientific Wild Ass Guess, but a WAG, Noble said, dropping the ‘scientific’ qualifier.

However, it’s also a conservative estimate, Noble has said.

Implementing the tax comes with its own steep price tag. Noble has estimated he’d need a $10 million appropriation to buy a new computer program, with a $3 million annual upkeep cost. He needs $1.5 million to hire as many as 10 new employees. The cost has been a sticking point with some lawmakers, while also feeding claims that the real goal is to set the stage for implementing broader income taxes.

In addition to  the five members of the Senate committee, more than 20 lawmakers stood or sat in the room as the hearing stretched into Valentine’s Day evening.

Senators and representatives spoke on both sides of the bill, which has 22 sponsors including the leadership of both chambers and political parties.

The bill, and the lawmakers on the committee, faced a two-pronged attack. One line of opposition came from corporate lobbyists and tax lawyers, who argued the tax would in fact affect their bottom line and that those affects would be passed on to Wyoming through lost jobs and wages and higher prices. Some of those lobbyists also suggested the idea should be studied during the interim period.

The bill was rushed through the House earlier in the session, appearing late and being moved quickly from committee and through votes on the floor by leadership.

Several lobbyists also pushed back against the idea that the tax wouldn’t impact Wyoming residents. Retail and grocery stores operate on low margins of profit, they said, that make them vulnerable to the proposed tax. Corporations would slash hours and jobs to make up for the costs of the tax, they threatened.

Walter Eggers, one of several  Holland & Hart attorneys to testify, said the firm believes the proposed tax may be unconstitutionally narrow in its targeting of only large businesses involved in a small sector of the economy. The state Constitution requires taxes to be applied uniformly unless there’s a “rational basis” for doing otherwise, Eggers said.

In the case of the proposed income tax, “we do not believe” that there is a rational basis, Eggers said.

Another bill opponent argued his business was uniquely positioned to be harmed by the tax that proponents have pitched as harmless.

But its competitors, other concessionaire giants like Xanterra or Delaware North, remain privately held by billionaires and wouldn’t face the tax, Klein argued.

Walmart, which has often been used as an example for the targeted companies, also had a representative at the meeting. Debbie Herron, public affairs director for Walmart Wyoming, said the company has more than 4,600 employees in the state. The tax would raise Walmart’s cost, of doing business, she said.

Herron argued Walmart today had “a very level playing field when it comes to retail.”

“This bill disrupts and distorts that,” she said.

Klein, Herron and some other bill opponents suggested a broader income tax would be fairer because it would hit all businesses fairly. But such a suggestion would likely be panned in Wyoming’s current political climate, while also sparking opposition from corporate interests.

The other line of opposition came from backers of the Wyoming Republican Party’s position against any tax increases of any kind. Those opponents saw a sneaky effort to install income taxes in the state and suggested a vote for the bill would doom lawmakers’ re-election chances.

“We’re talking about the first income tax in the state of Wyoming and it’s only been out in the public for a month,” said Sen. Bo Biteman (R-Sheridan). Biteman urged lawmakers to wait an election cycle before moving the bill, thus putting the question to the voters.

“None of us campaigned on raising a corporate income tax, none of us did,” Biteman said. “If we did, we wouldn’t be here.”

Supporters of the bill, and some lawmakers on the Senate committee that described themselves as still undecided, pushed back against the lobbying by arguing that Wyoming needs to consider new revenue sources.

Tammy Johnson, with the Wyoming Education Association that represents teachers, said schools are also big employers in Wyoming, and in some small towns the biggest.

“We can’t compete with those big box stores that bank $4 billion a year in profit with their low margins that they keep talking about,” she said.

It is time for the large corporations operating in Wyoming to play their part for the state, said Senate Corporations Committee Chairman Bill Landen (R-Casper). In his brief speech on the subject, he captured some of the antipathy of some lawmakers against the corporate interlopers in Wyoming’s small-town economies: