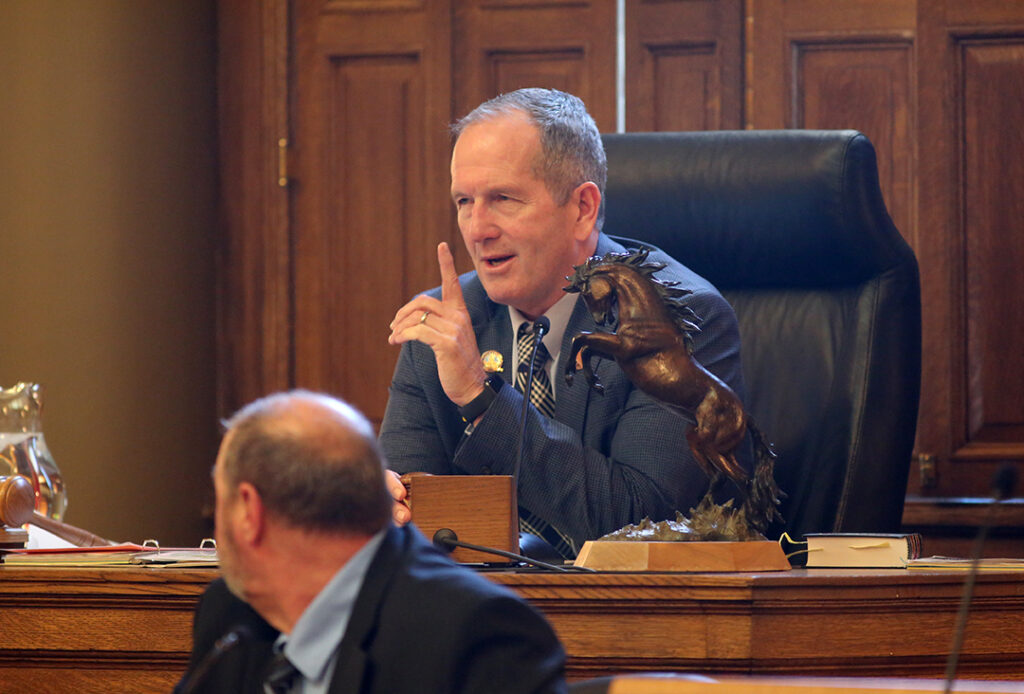 CASPER, Wyo. — The Wyoming Legislature alternates between budget sessions and general sessions each year. These sessions can not exceed a total of 60 days across each two year stretch under the Wyoming Constitution.

The Wyoming House of Representatives discussed a proposed amendment to the Constitution regarding rules for budget sessions.

“During the budget session no bills except the budget bill may be introduced unless placed on call by a two-thirds vote of either house,” Article 3, Section 6 of the current Constitution reads.

Speaker of the House Steve Harshman says the purpose of the amendment would be to do away with the two-thirds “supermajority” requirements to have bills introduced for consideration, arguing that such rules are undemocratic.

“Our founders never had this in the Constitution,” Harshman said. “[The proposed amendment] is really about the way you represent your constituents. You come here to bring an idea.”

“It’s got to pass a supermajority vote which is not favored in western democracy.”

Harshman acknowledged that two-third supermajority vote requiremtents are not unqiue to introductory votes during budget session. They are also required to amend the Constitution, for example.

He said that in cases like that, the supermajority vote threshold is appropriate, but that the requirement is an unnecessary hurdle when it comes to bills simply getting introduced in the legislature.

“It is such a waste of time,” he said, noting that the House spent significant time debating bills for introductory vote during the current session.

He said he thinks it makes more sense to allow the ideas to be more easily introduced and sent to committee for deliberation.

“Let the beauty of the process work,” he said. “Let [introductory bills] get read, referenced and referred [to committee] without this timeout.”

“How are we going to handle the 50 or more bills during a session?” he asked.

House District 43 Representative Dan Zwonitzer said the House would still be able to establish their own rules within the process which would be able to address Yin’s concerns.

“If we take this off in the Constitution we will still govern ourselves,” he said, adding that he thinks the House has found ways around the limitations anyway through the use of consent list votes which allow the House to consider multiple bills at one time, for example. “What you are finding is we are just getting around it. It is not like we would like to pass more laws, society is forcing [that] on us to keep up with the times.”

House District 30 Representative Mark Jennings said that Wyoming voters amended the Constitution in the 1970s and the legislature should consider their wisdom in doing so.

“This [supermajority requirement] has winnowed out some ideas. This is a budget session, I want to see us concentrate on that. It helps us focus on what’s the really important issues. Some things are worth being a little more difficult.”

House District 60 Representative John Freeman said he’d voted against a similar resolution in 2019. But during the 2020 session, he has a bill that was listed to be considered for introduction, but the House failed to take it up. Noting that he thought his bill would have helped “students all over the state,” he said he would be supporting the resolution this year.

House District 53 Representative Roy Edwards said that there are multiple ways that a bill can die in the House beyond a failure to cross the supermajority threshold on introduction.

He said he was against the proposed resolution.

Harshman acknowledged bills could die at other stages of the legislative process.

“I think there are hurdles that are really significant,” he said, noting that. “This [resolution] will require a two-thirds vote [in the House and Senate] on third reading.”

“I made a similar speech last year about this issue,” he said. “The times change. Not all of us were born in the ’70s, in fact I don’t remember the ’80s.”

“The point that I’m making…as technology progresses and as society progresses, for better or for worse, this body…needs to be as nimble as possible.”

He noted that technology allows legislators “to get bills and amendments off computers almost as quickly as they are written up.”

“I don’t think we are throwing caution to the wind,” he said. “I think it is simply the fact of life we need to make this body more nimble.”

House District 49 Representative Garry Piiparinen said that he was against the proposal and added that he thought the House was already trying to work on too many bills.

“As I look at the number of bills that come out during this budget session…we work long hours,” he said. “I’m not so sure we do the people of Wyoming justice when we are working these long hours, I think we lose some of sharpness.”

“This was a budget session. We spent very little time talking about the budget. Did we solve the problems? No. We spend time on the things that matter least.”

House District 31 Representative Scott Clem said that some of his own ideas had failed to be taken up by the House, but that he was still against the proposal.

“Right now, bills are dying,” he said. “That’s not necessarily a bad thing. I think about the deadlock that happens sometimes in this body. That’s probably a good thing sometimes that nothing gets done.”

House District 20 Representative Albert Sommers said he was in favor of the proposed resolution for the Constitutional amendment.

“I’m in support of the resolution,” he said. “It gets rid of a process that doesn’t need to be there. Those introductory votes waste a lot of time. What this simply does is get rid of an inefficient mechansim to get a bill to committee.”

Should the resolution be fully adopted, voters would be asked to decide on the proposed Constitutional amendment.

The Wyoming Secretary of State would be asked to endorse this statement to put before voters: