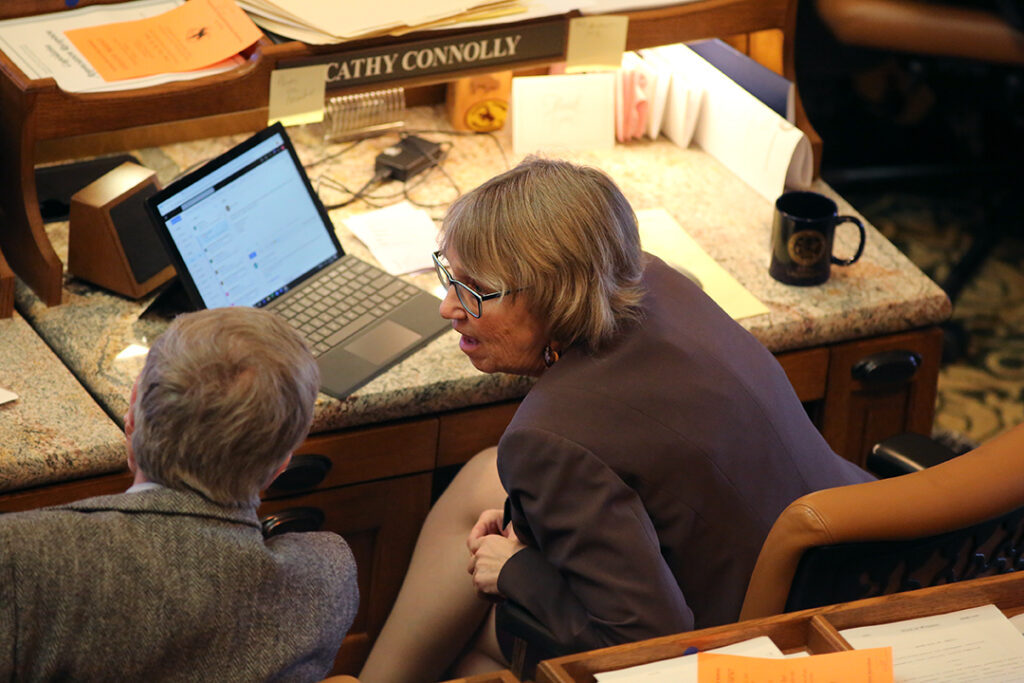 At 10 p.m. Tuesday, beneath near-empty galleries, outnumbered Democrats in Wyoming’s House of Representatives mounted a failed but emotional stand against a bill to impose a 48-hour waiting period on abortions.

Midnight, the deadline for House bills to pass a first floor vote in the chamber and thus survive, was just around the corner when House Majority Floor Leader Eric Barlow (R-Gillette) called out the last list of bills the House would debate that day.

The tour groups and citizens that wander the recently renovated Capitol had long since departed. The Senate had adjourned nearly five hours earlier. The gleaming restored hallways, chambers and galleries were empty and quiet but for those lobbyists stuck waiting for measures they were watching to appear before the House.

House Bill 197 – Abortion-48 hour waiting period would force doctors to require women to wait 48 hours before receiving an abortion. Doctors who don’t do so would be subject to a felony charge and up to 10 years in prison.

The bill is sponsored by Rep. Richard Tass (R-Buffalo), a conservative in his second year in the House. Tass got the bill through the House last year but it died in the Senate where a committee declined to hear it.

“The object of the bill is to give some time to reconsider the seriousness of this action,” Tass said as he introduced the bill. “I think everybody knows where they are on this so I would move that we pass this bill.”

The House’s nine Democrats (out of 60 lawmakers) had a different plan. Clearly outnumbered, they sought to fight the bill or at least dilute it by introducing five amendments.

“Friends, I hate this bill for so many different reasons,” the University of Wyoming professor told the chamber in which she has served for just over a decade. Her amendment would have changed the punishment for a doctor from a felony to a misdemeanor and reduced the punishment from ten years to one year, a $1,000 fine, or both.

The amendment was not a “friendly” one, Tass said, informing his colleagues that as the bill’s sponsor he wanted it to fail. He got his wish on a voice vote. Bill opponents called for lawmakers to stand to record their votes. The amendment failed 20-28.

After Connolly, Rep. JoAnn Dayton-Selman (D-Rock Springs) brought an amendment. Though a Democrat, Dayton-Selman voted in favor of introducing HB-197. She voted against last year’s iteration. Her amendment would have changed the bill so that the waiting period would begin once the woman has “become aware” of the procedure, as opposed to being informed by the doctor.

The amendment failed with no vote count.

Rep. Mike Yin (D-Jackson) then withdrew an amendment to remove the punishment for doctors entirely. The body had expressed its will by voting against Connolly’s amendment, he said. But he did not do so without a parting shot against the bill, and the hour at which it was being argued.

“We’re debating one of the most socially contentious issues of the state,” Yin said. “I just want to display my disappointment in us dealing with this bill at 10 p.m. at night on a budget session.”

Rep. Sara Burlingame (D-Cheyenne), followed that theme. Her amendment sought to change enactment from July 1, 2020, to July 1, 2022. The change would give lawmakers a chance to debate it again next year. The bill should be “the work of a general session,” she said, not a budget session.

As a budget session, the current meeting of the Legislature is shorter than general sessions which convene on odd-numbered years. Budget sessions are supposed to focus on the state’s two-year budget, though lawmakers debate hundreds of bills. Arguments that abortion legislation should not be considered during such a session have failed to sway the majority party, which controls the agenda.

Both chambers, for example, passed an amendment into the budget that bars UW students from using student health plans they contribute to for abortions. The amendment does not ban abortions when the life of the mother is endangered without the procedure or when the pregnancy resulted from incest or sexual assault.

“You can go home and say you voted for this bill,” Burlingame said, “but you can also know that you honored the process and you put it where it belonged in the general session.”

The bill had already been debated by the House last year, Tass said, and the amendment wasn’t friendly. It died with 16 votes against it.

“That’s wishy-washy,” she said. Clifford, a Northern Arapaho tribal member, is the chamber’s only indigenous representative. She described herself as “coming from a strong people who… appreciate women who give life,” and used Arapaho words to describe herself as a mom, grandmother and “aunty.”

“‘Appropriate’ to me and my culture is a lot different from what you guys consider ‘appropriate,’” she said.

“One more time, this is not a ‘friendly’ amendment,” Tass said.

But some Republicans also supported this last attempt to amend the bill. “The amendment actually makes the language cleaner,” said Rep. Clark Stith (R-Rock Springs), an attorney. “It’s easier to read and subject to less dispute.”

Rep. Shelly Duncan (R-Lingle) agreed. “Why such a resistance and no flexibility whatsoever?” she asked. “Because [the amendment] actually makes it more clear and stronger. I’m not for abortion but it’s really hard for me when someone is looking at me and not flexible. I raised three children. I am this person here.”

Debate on the bill itself was emotional.

“Let the doctor give the healthcare advice and not the state Legislature,” Yin said.

Coal-town representative Tom Crank (R-Kemmerer) talked about his mother having to face a high-risk pregnancy in 1975, before the U.S. Supreme Court’s Roe v. Wade decision. “She didn’t have to make the decision,” Crank said. “It was illegal. It was a tough time and it affected me pretty good.”

Tass countered that he too had heard emotional stories, about abortions women regretted having. “‘I’ve changed my mind,’” he described one woman as saying just after an abortion procedure. “It was too late,” he said.

At 10:27 p.m., the House advanced the bill on a voice vote without a count. The bill will face two more votes in the House.

Seventeen other bills were left to die without debate or a vote when the House adjourned approximately 20 minutes later.