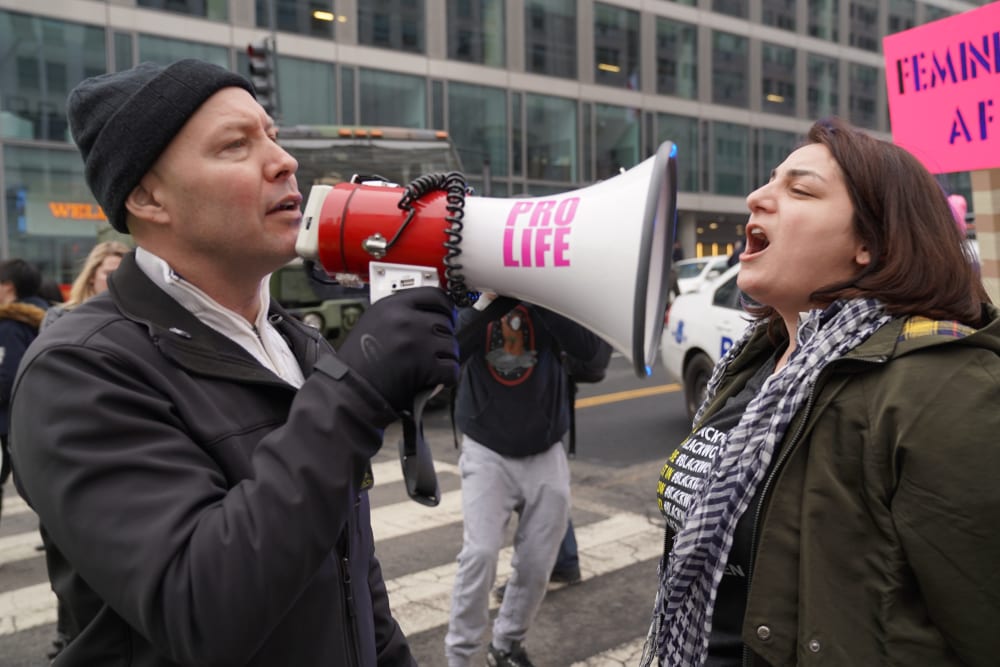 An abortion supporter shouts into a bull horn of an anti-abortion activist under police protection at the 2019 Women’s March on Jan. 19, 2019, in Washington, D.C. (Shutterstock)

CASPER, Wyo. — The House passed a bill on third reading during their Friday, Feb. 28 floor session that would require a 48 hour waiting period before abortions could be performed in the state.

Physicians are required to inform patients that technology allows them the option to view active ultrasounds of unborn fetuses and hear fetus heartbeats if audible.

The proposed legislation would require that patients wait at least 48 hours after having been informed by physicians of these options before having an abortion performed.

Several amendments were considered ahead of the third reading vote.

House District 44 Representative Sara Burlingame offered an amendment that would require the Department of Health to reimburse women for “reasonable expenses associated with complying with the forty-eight hour waiting period requirement.”

“These expenses may include those incurred for temporary housing, meals, mental health counseling and any other reasonable associated expenses, as determined by the department.”

Burlingame said that under her amendment, “The poor working women of Wyoming get resources. Please vote aye.”

The original legislation would have made it a felony to perform abortions without waiting 48 hours. An amendment from House District 33 Representative Andi Clifford reduced this to a misdemeanor and set the proposed penalty at a maximum prison sentence of one year and/or fines up to $1,000.

The House adopted that amendment.

The legislation provides an exception to the 48 hour waiting period requirements, allowing abortions to be performed when deemed medically necessary to protect the life of a woman.

The bill is sponsored by Representatives Tass, Clem, Gray, Hallinan, Jennings, Laursen, Miller, Styvar and Winter. It will move to the Senate for consideration.