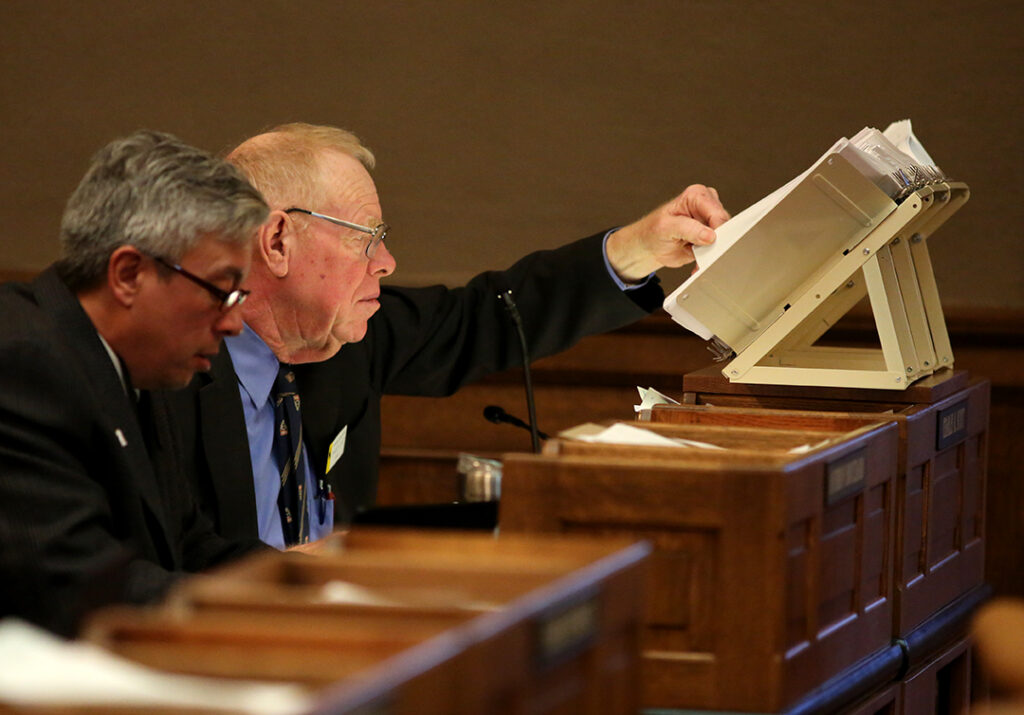 CASPER, Wyo. — The Wyoming Senate passed House Bill 0047 on first reading during their Monday, March 2 floor session on a vote of 20-9.

“It is complicated,” Senate District 25 Senator Cale Case said in describing how a municipal tax could be imposed. “Our local governments are very reliant on sales tax.”

He noted that if Wyoming continues to see tax revenues from minerals such as coal decrease, the state will need to find new ways to fund local governments.

Case said that the he thought the Wyoming Association of Municipalities was “afraid” of the legislature tying the local sales and use tax rules to the direct distribution formula. He discouraged his fellow senators from amending the legislation in such a manner, saying he thought it best to “leave that to future legislators.”

The Senate’s discussion revealed that other aspects of the bill are causing confusion among legislators.

“I’ve long thought that there was a need for a municipal option,” Senate District 30 Senator Charles Scott said, noting that the some counties have struggled to get “fifth penny” sales and use taxes imposed due to “rivalries, jealousies” and distance between municipalities within counties.

Scott said he was concerned that the bill would allow counties to make the “fifth penny” permanent, though in some sense, counties are already able to make such taxes “permanent.”

“My concern with this bill is over this permanency provision,” he said. “It seems that this municipal option is a smokescreen for what is really going on in this bill.”

Scott said he had concerns that if a county is able to make the fifth penny tax permanent, voters would lose one means of control over their local government spending. He said he thought counties might repeatedly put the question to make the fifth penny permanent before voters “until they get lucky” so that they wouldn’t have to ask voters to support the “fifth penny” again.

“This has removed one of the controls [voters] have over what their city does,” he said. “Permanent means permanent. As long as that provision is in this bill, I think passage of this bill is extremely unwise.”

Scott was referring to an aspect of the proposed bill which would allow counties to “submit a proposition to the voters establishing the term of the tax as permanent” if the county commissioners along with 50% of the municipal governing bodies in a county agree to put this proposition on the ballot.

However, Senate District 22 Senator Dave Kinskey said that as he understood things, counties already have the ability to make the “fifth penny” permanent under existing law.

“They have the option to say that it permanent right now,” he said.

This same point also caused some confusion when the bill was still in the House of Representatives.

House District 32 Representative Tim Hallinan introduced an amendment that would have done “away with the permanency of the taxes that are imposed.”

Hallinan said that the proposed legislation would allow a county wide “fifth penny” tax to become permanent after one vote.

“This bill makes something permanent and then we wouldn’t have any control of it after that,” he said.

When a proposition on the ballot is approved by voters, at subsequent general elections, statutes require that voters be asked whether to renew the “fifth penny” tax.

An exception under existing rules allows county commissioners to pass a resolution to continue the tax without asking voters to renew if at least half of the governing bodies of municipalities in the county adopt ordinances along similar lines.

Hallinan’s proposed amendment to the bill would have eliminated this ability for counties to renew the county-wide “fifth penny” sales taxes without placing the item on the ballot.

The House killed that amendment.

He said that representatives for both Wyoming counties and municipalities had asked that the legislature make the “fifth penny” permanent.

“Everybody wants the legislature to make these taxes permanent,” Case said. “We said no.”

Instead, the bill includes the provision which Scott referred to which allows counties to ask voters directly whether they’d like to see the “fifth penny” sales and use tax imposed on a permanent basis.

Municipalities would also be able to ask voters to support a local sales and use tax if there is no county-wide “fifth penny” tax with the consent of their county commissioners.

However, when a municipality looks to impose a “seventh penny” tax beyond the county-wide taxes, the term of the municipal tax would be limited.

It could only be imposed 90 days after a county-wide tax has been approved by voters. Furthermore, the municipal tax would have to expire when the county-wide tax expires.

Under the House version of the bill, municipalities could only ask voters to support a local sales and use tax during general elections.

Case explained that the proposed amendment would have allowed municipalities to bring such questions to voters during both general and special elections.

Senate District 21 Senator Bo Biteman said he was opposed to the amendment allowing voters to decide on “this very important topic…in an off year election.”

“General elections have by far the greatest turnout,” he said. “This is a big deal. Don’t take this lightly, think about what we are doing here.”

“I would also speak against the amendment, [though] I do like the bill,” she said. “We have to have some trust in our voters. I really think our voters will do the right thing. If they vote no, they vote no.”

“You’ve got to think about the practicalities of the timing here,” Case said. “You’ve got to wait two years, which limits the ability of municipalities to take advantage of this. That’s the basic problem. There must be some compromise.”

Despite his calls for fellow senators to support the amendment the Senate killed that amendment on an 11-16 vote.

Senate District 05 Senator Lynn Hutchings asked for clarification on another aspect of the proposed bill.

Current law allows Wyoming counties and municipalities to impose excise taxes on lodging services of up to 4% for local travel and tourism promotion.

The House and Senate have both passed a bill which would modify lodging tax rules and impose a statewide lodging tax if the governor signs that proposal into law.

The local sales and use tax tax bill also makes mention of the local excise on lodging services as it pertains to how local governments are able to impose such taxes.

“The lodging excise tax for local travel…is this a tax on top of the tax we already passed?” Hutchings asked.

“It is not a tax on a tax,” Case said. “[Local sales and use tax] is imposed on lodging as well. It is on top of the room price.”

Case explained other proposed new provisions of the bill. That includes a provision which would allow counties to impose “fifth penny” taxes for an initial term of four years rather than two.

In order for counties to place a “fifth penny” or “sixth penny” sales and use tax item on the ballot, current law requires that the county commissioners and two-thirds of the governing bodies of municipalities in the county agree to this.

The bill would lower this threshold to 50% of municipal governing bodies in a county agreeing to place the item on the ballot.

Current rules also allow the item to be placed on the ballot if a petition signed by 5% of the voters in a county ask this to be done.