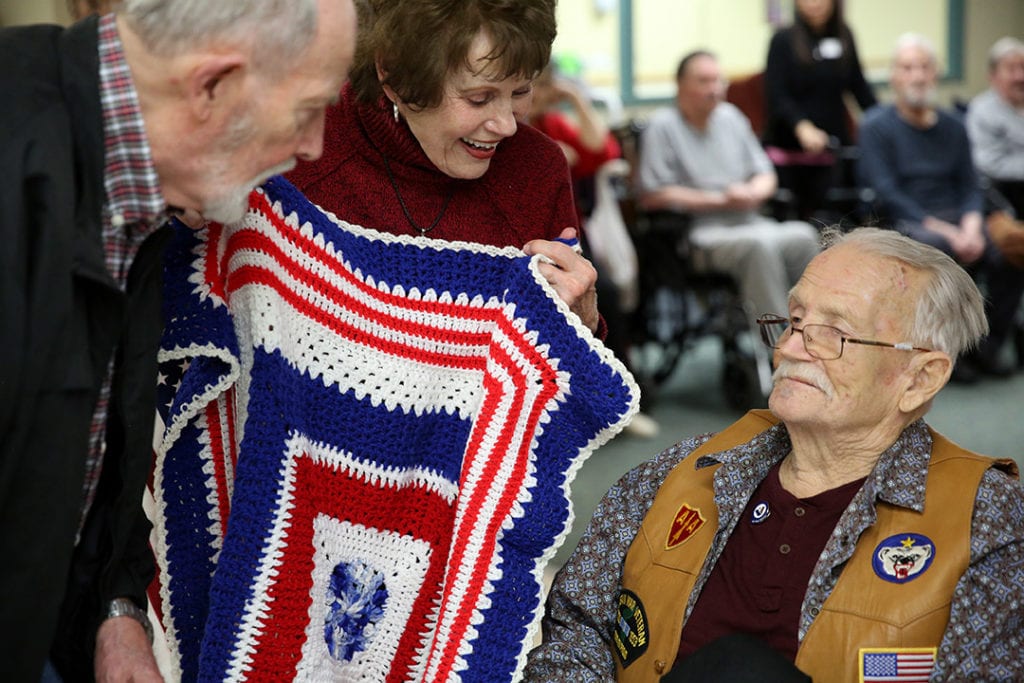 Quilts made by hospice volunteers are given to the veterans during a ceremony. (Dan Cepeda, Oil City)

The Senate adopted an amendment to the bill ahead of their second reading vote.

“We had a good conversation Friday,” Senate District 27 Senator Bill Landen said, before explaining that the amendment would add “hospice services” to the list of senior health care services that would be eligible for the new senior health care district rules. “I think this is important…A lot of care out there for our seniors ends up in that place.”

Senate District 30 Senator Charles Scott said he was in favor.

“My instinct on this amendment is it is a friendly amendment and a good idea,” he said.

With the adoption of the Senate’s amendment, the following types of health care provided to people 60 or older, to those with developmental disabilities or to people with early onset dementia or chronic diseases who are not yet 60 would qualify as “senior health care” under the proposed bill:

“The board of county commissioners, at the time of making the levy for county purposes shall levy a tax for that year upon the taxable property in the district in its county for its proportionate share based on assessed valuation of the estimated amount of funds needed by each senior health care district but in no case shall the tax for the district exceed in any one (1) year the amount of two (2) mills on each dollar of assessed valuation of the property,” the proposed legislation states.

Before the House of Representatives passed the bill on a third reading vote of 48-11, the House added some amendments.

An amendment from House District 03 Representative Eric Barlow amended the definition of “senior health care” in the bill.

Barlow explained that his amendment lowered the age to 60 to align with federal regulations.

He added that his amendment would “allow someone with early onsent dementia or a chronic disease who is not 60 years old and not disabled to also have residency in one of these facilities.”

“This is actually how it is being done in the state,” Barlow said. “In my haste…I overlooked a population that is already receiving care in our state so we certainly don’t want to exclude them from the opportunities to receive care.”

The House killed an amendment proposed by House District 31 Representative Scott Clem. That amendment would have added the following section to the bill:

“I forsee if this bill does pass…possibly some time in that future that perhaps my community in Gillette would have a senior healthcare district,” Clem said. “Currently we do have a nursing home that is ran by what is currently our hospital district. This entity, this hospital district is taxpayer funded.”

“What we are finding out, something that occurred this last year is, there are certain individuals who are being denied access to care. This is where it really kind of rubs me wrong.”

He said that since the senior health care districts under the bill would be taxpayer funded, he thought that access should be guaranteed to all citizens, regardless of immunization statues.

“What’s happening in my community right now is another taxpayer funded special district, a hospital district, is taking taxpayer money to provide access to care but then turning around and denying access to certain taxpayers based upon their immunization status,” Clem said. “We have the CDC that has come out with an adult vaccination schedule. My concern is I don’t want a taxpayer funded special district to turn around and say ‘No, you can’t come into our nursing home because you’re not vaccinated according to the CDC recommendations.’”

“That’s what this is really about, not mandating recommendations.”

Clem pointed out that public schools in Wyoming allow some vaccination schedule exemptions based on religious or medical reasons.

House District 20 Representative Albert Sommers brought up the “recent outbreak of coronavirus.” He suggested the amendment could be problematic since some senior health care facilities might not be “geared to handle that virus.”

“Let’s go back to smallpox, what if smallpox comes back?” he added.

House District 45 Representative Charles Pelkey said that the amendment should be shot down.

“We would be exposing a particularly vulnerable population to the affects of a disease based on an individual’s decision [to not get immunized],” he said. “If you look back at some of the flu pandemics of the past, those that were particularly most susceptible were the young and the elderly.”

“This amendment may potentially expose large number of people to the consequences of an unimmunized patient in their presence. The ramifications go far beyond an individual’s choice.”

Clem said that the state health officer would maintain the “power to do a statewide quarantine” in case of disease outbreaks.

“There is nothing in this amendment…that would prohibit the state health officer from doing her job,” he said.

“We already do this in schools,” he said. “Religious, medical exemptions on this, this is a good thing.”

House District 07 Representative Sue Wilson said that “I think we would go down a dangerous path if we are to mandate that health care providers must provide services against their professional judgement. Right now in statute we have conscience exemptions for health care providers providing abortions.”

House District 34 Representative Tim Salazar said that he was in support of the amendment.

“It is my understanding that the Supreme Court has made a number of exemptions for religious freedom,” he said. “With regard to the argument of mass epidemics, yeah we’ve had mass epidemics before, I don’t know when the last one was, I think it was a few decades ago.”

“This amendment deals specifically with day to day religious freedom rights for those people who are not for religious reasons immunized.”

Pelkey said that the United States Supreme Court “has not ruled that mandatory vaccinations are unconstitutional.

House District 53 Representative Roy Edwards said he was concerned about immigrants who had not received immunizations.

“This country has a problem where we treat two different peoples differently,” he said. “Those that are coming into this country illegally don’t have all the immunizations but they will do whatever to treat them and a lot of times they won’t get any money back out of it. But yet the citizens of our country that pay the taxes, they can refuse to treat them because they were not immunized the way they think they ought to have been.”

Pelkey called a point of order saying that “the speaker is drifting off topic” of the proposed bill.

He later said, “Given that we were on the subject of immigrants, data would suggest that they have a higher rate of vaccination than do some sectors of the American population.”

Should the Senate pass the bill on third reading and then successfully move through the concurrence process in the legislature, the bill would move to Governor Mark Gordon’s desk for consideration.