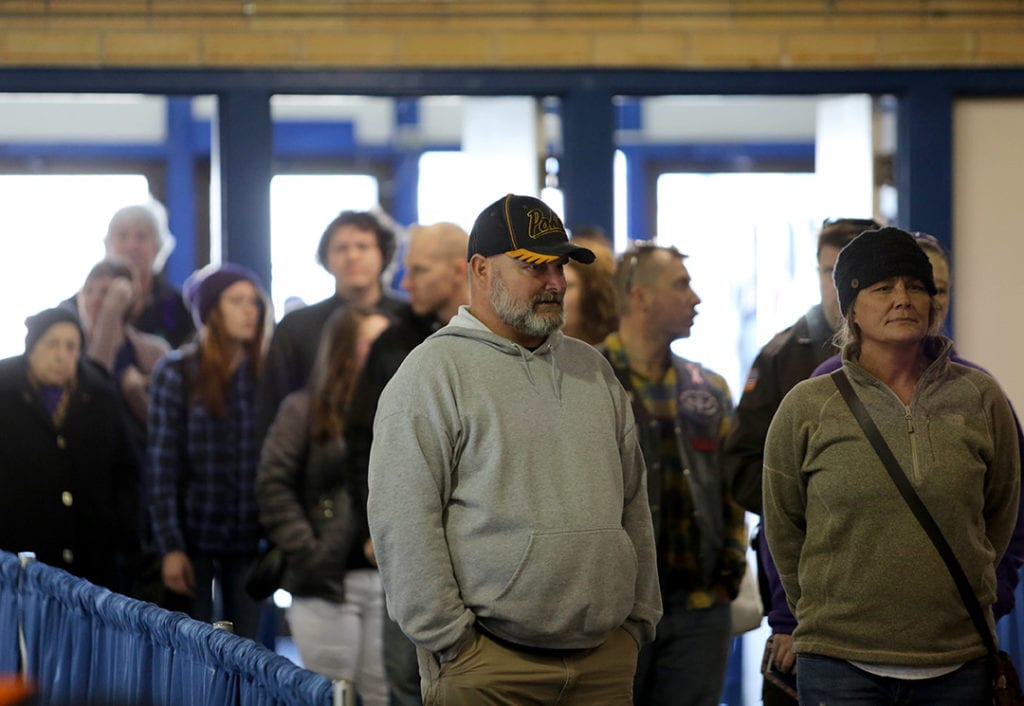 Voters wait to be sent to their proper polling station in the Industrial Building in Casper. (Dan Cepeda, Oil City)

CASPER, Wyo. — The Wyoming Senate resumed debate over the term “permanent” when discussing House Bill 0047 ahead of second reading on Tuesday, March 3.

While the bill has moved through both the House and Senate, questions have arisen as to whether counties and towns should be allowed to make such taxes “permanent.”

Under current Wyoming law, county-wide sales taxes can only be imposed after a majority of voters in the county approve the imposition of such taxes. But once voters have approved a “fifth penny” tax, county commissioners can extend the tax without asking voters to renew it.

They can do so by passing a resolution if at least 50% of the governing bodies of municipalities in the county pass ordinances along the same lines.

“My understanding is it has happened in two counties,” Senate District 22 Senator Dave Kinskey said.

He pointed out that provisions allow the county-wide taxes to be recalled even if county commissioners attempt to renew the taxes via resolution.

“There is already a provision to recall it at the ballot,” he said.

Senate District 30 Senator Charles Scott offered an amendment to the bill which would eliminate the means to make county and municipal sales and use taxes permanent.

“What this amendment does is limit the term for which the tax can be imposed to four years,” he said. “I think that permanency is unwise on one of these optional taxes. It makes the local governments much more responsive [to voters]. I think that is very valuable.”

Senate District 25 Senator Cale Case said that he was against the amendment.

“If you want to have it permanent, the counties can do it,” he said. “I’m sorry folks, but sales tax is going to be a bigger part of our future at the local level and possibly at the state.”

Senate District 18 Senator Henry Coe said that he didn’t think the bill should be amended since it was the result of a lot of work during the interim between the 2019 legislative session and the legislature’s 2020 budget session.

“It was a balancing act,” he said. “You balance the counties and you balance the municipalities. If you adopt this amendment, you jeopardize fine balance.”

Senate District 03 Senator Cheri Steinmetz offered a different amendment which would have ensured that at least two-thirds the governing bodies of municipalities in a county agree to put an item on the ballot asking voters whether they support a county-wide sales and use tax.

That is the threshold under existing Wyoming law, but the bill proposes lowering this threshold to 50% of the governing bodies of municipalities.

“Reinstate the two-thirds,” Steinmetz said. “It just requires that high bar and that delicate balance.”

Case said he was against the amendment.

“Remember, this isn’t the approval of the tax, this is the putting on the ballot,” he said. “My point is, it is not out of line to allow a minority of people to suggest to the body that they discuss [the optional sales and use tax]. It is not the thing that implements it, it is the thing that puts it up for discussion.”

Senate District 09 Senator Chris Rothfuss said that in Albany County, there are only two incorporated municipalities. He noted that in this situation, the two-thirds rule effectively meant that 100% of municipal governing bodies in Albany County must agree in order for the county to ask voters to support the county-wide tax.

“I represent a district that would like to tax itself more effectively,” he said. “Current statute holds them back. This amendment goes strongly against the interest of my constituents.”

Coe agreed that the 50% threshold was more reasonable.

“It is important to give them a tool in the toolbox, locally, to be able to deal with the issues that they have,” he said. “Leave in place the 50% because I think that is fair.”

“Yes communities are suffering,” he said. “Guess what that means? The people who live there are also suffering, the taxpayers.”

“We’re going to ignore them again, just like we ignored them on the lodging tax. Quit making it easier to raise their taxes when they are suffering too. Enough is enough.”

Senate District 06 Senator Anthony Bouchard saidthat he thinks counties and municipalities come up with “lists of goodies” intended to convince people to support optional sales and use taxes.

“I’ve watched them to go through these votes,” he said. “They’ve already got all the tricks to do it. It was crazy last time I saw this process.”

He said he was in favor of the two-thirds threshold.

“It is not goodies,” Kinskey said in response to Bouchard’s argument.

He noted that optional sales taxes are used to pay for things like firetrucks, police cars and major street projects.

“It is maintaining the soul of a community,” he added. “This is not a decision to actually put the tax into effect but simply to put it on the ballot.”

Senate District 12 Senator Liisa Anselmi-Dalton said she was in favor of the two-thirds threshold in order to prevent voter tax fatigue. She said that she thinks Wyoming should instate a 1% statewide sales tax so that voters don’t have to be frequently asked to support a variety of small taxes.

“This little tax her and there…people will get fatigued,” she said.

The Senate rejected Steinmetz’s amendment, meaning the bill still proposes lowering the threshold for municipal governments to agree to put an optional sales tax item on the ballot to 50%.

After rejecting several other amendments, the Senate passed the bill on second reading. If they pass the bill on third reading, it would need to move through a concurrence process since the Senate has amended the version of the bill they received from the House of Representatives.

This article explains the Senate’s discussion on first reading along with other details regarding House Bill 47.