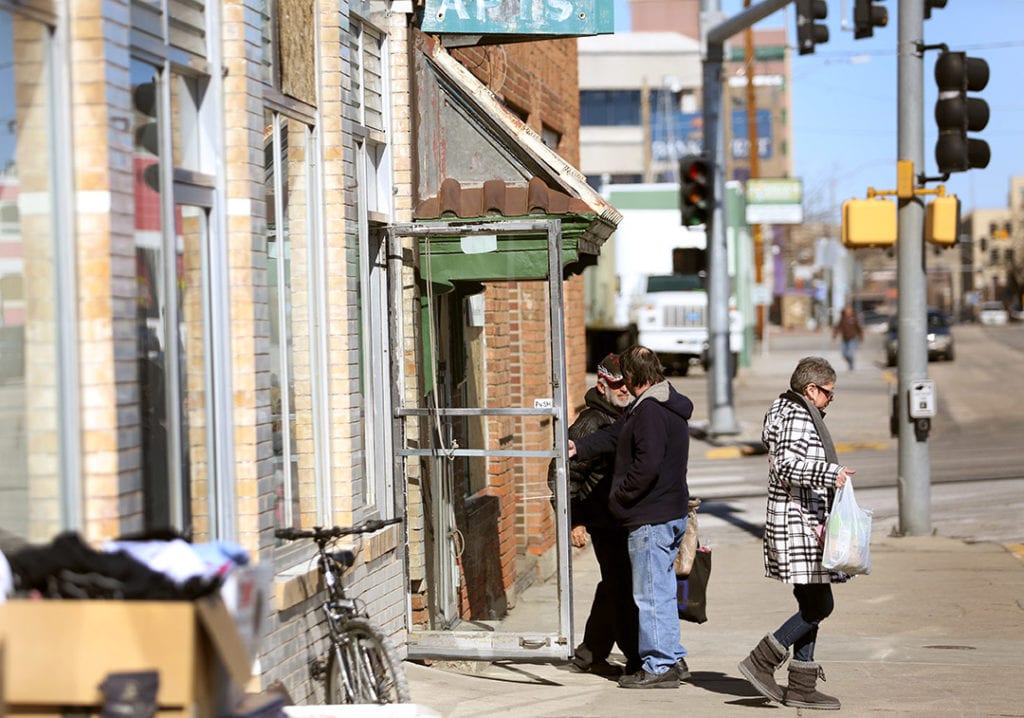 People gather at the entrance of the Poverty Resistance Food Pantry on 450 South Wolcott in Casper. (Dan Cepeda, Oil City)

CASPER, Wyo. — The Wyoming House of Representatives discussed repealing an exemption for “food for domestic consumption” from sales and use taxes in the state during their Wednesday, March 4 floor session.

House District 43 Representative Dan Zwonitzer proposed an amendment to repeal the tax exemptions on food which he said were put in place when the state was “flush” with cash in 2007. His amendment was discussed ahead of the House’s second reading vote on Senate File 57, a bill related to the distribution of $105 million in state funds to counties and municipal governments.

“This is a conversation we have to have,” Zwonitzer said. “We have a $1 billion deficit and this is small potatoes. [Repealing the food tax exemption] is the easiest thing we can do.”

House District 44 Representative Sara Burlingame spoke against the amendment, saying that it should not have been proposed on second reading of the local government distributions bill.

“This to me, the manner, looks like mischief,” she said. “This is exactly the kind of thing that is going to get my constituents up in arms.”

“I don’t think [this manner of proposing amendments] is the one that builds the most trust in us.”

Zwonitzer said that he was “not trying to have trickery.”

“But it is my job as a revenue chairman to tell you how bad [the state’s financial outlook] is,” he said.

Zwonitzer said that repealing the food tax exemption would generate about $58 million a year.

“This is 10% of what we need to keep functioning at the current level without going into debt,” he said. “This is an easy conversation compared to what is coming up next year.”

“This is a conversation we should be having on at least 20 bills a year.”

“Wyoming is an aging state,” he said. “We have many elderly people on fixed incomes. Please vote no.”

“In my district we have a large percentage of the working poor,” Clifford said, noting that because they are working, they wouldn’t qualify for programs to subsidize their food purchases.

She said that such people have to make tough decisions about whether to pay rent or buy prescriptions they need or even to pay for heat.

“These are tough questions,” she said. “This really is going to be detrimental to my people and my constituents.”

House District 32 Representative Tim Hallinan said that 80-90% of constituents he has spoken with are opposed to the sales tax on food.

“They think this taxes the poor,” he said. “It is a regressive tax.”

House District 52 Representative Bill Pownall said he was in favor of the amendment.

“This isn’t new,” he said. “Folks paid taxes on groceries for years. I think this is a fair tax. Everybody pays it.”

He said that poor people are able to receive subsidies through other programs.

“They are not going to starve,” Pownall said. “This particularly amendment would alleviate some issues that we would currently have.”

“Food banks have to go out and buy that food in the same way that we would,” she noted.

“We need money,” he said. “This is $120 million a biennium. That is a lot of cash to help fund the core structure of our state agencies. I think it is one of the fairest taxes out there.”

“This is wrong on so many levels,” he said. “You want to take $120 million out of the economy to feed the spending habits here at this [state] level. The cost of living is going one way, it has gone up. I would encourage a strong no vote.”

Zwonitzer acknowledged that removing the exemptions would hurt some people.

But he noted that the state has the lowest sales tax in the country “and we don’t have an income tax.”

He urged his fellow representatives to think about the state’s revenue forecast going forward.

The House rejected Zwonitzer’s amendment. They then passed the local governement distributions bill on second reading.

Further details about that bill are available online.