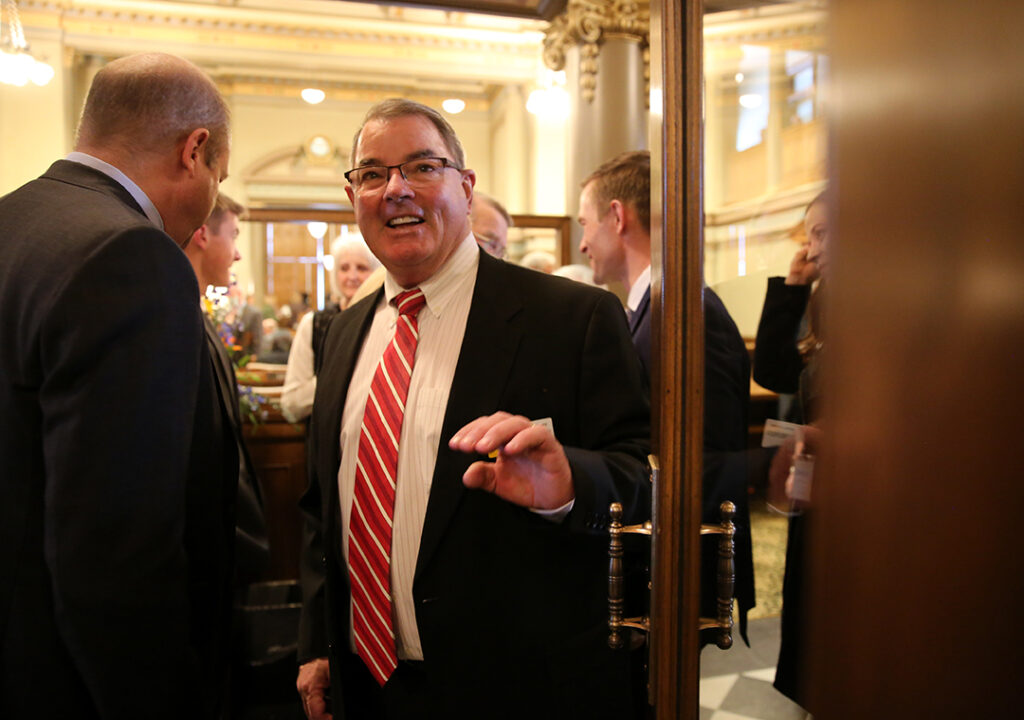 CASPER, Wyo. — House Bill 68 aims to require registered sex offenders to obtain permission from Wyoming school principals or vice principals before they are able to access school grounds for their own children’s events at the schools.

Current Wyoming law generally forbids registered sex offenders from accessing school grounds, but provides some exceptions, including when they are attending their own children’s academic conferences or extracurricular activities.

Wasserburger said that registered sex offenders with children attending a school should require written permission from principals to attend such events, which is what the bill proposes, noting that this requirement was not in place during his time as a principal.

Senate District 27 Senator Bill Landen said he was in favor of requiring registered sex offenders to receive approval from school principals in order to attend events at schools.

However, he pointed out that “it is a rainbow of things that people stub their toe on” which require them to register as sex offenders.

Women Against Registry President Vicki Henry sent information to Oil City citing data from the National Center for Missing & Exploited Children that “there are over 912,000 men, women and children (as young as 8 and 10 in some states) required to register” as sex offenders across the United States.

Henry said that the “crimes” (Henry’s quotes) which require people to register as sex offenders can include:

“Women Against Registry advocates for the families who have loved ones required to register as sexual offenders,” Henry said. “[T]here are well over 3 million wives, children, moms, aunts, girlfriends, grandmothers and other family members who experience the collateral damage of being murdered, harassed, threatened, children beaten, have signs placed in their yards, homes set on fire, vehicles damaged, asked to leave their churches and other organizations, children passed over for educational opportunities, have flyers distributed around their neighborhood, wives lose their jobs when someone learns they are married to a registrant.”

She added that a study conducted by Dr. Jill Levenson at Florida-based Lynn University found the following information regarding victims of sexual abuse:

The study found that 7% of victims of child sexual abuse were strangers to their abusers and that 40% of sexual abuse takes place in a victim’s home and that 20% takes place at the home of a friend, neighbor or relative.

“There is a tremendous need to fund programs like ‘Stop It Now’ that teaches parents how to begin and maintain a dialog with their children to intervene before harm occurs and about grooming behaviors as well as other things at age-appropriate levels,” Henry said. “Our question to the public is one of, when does redemption begin?”

“When are those required to register given their lives back without the stigma and hate? We support the principles of Restorative/Transformative Justice; restore the victim, restore the offender and restore the community. Unfortunately, our justice systems, federal and some states, prefer to annihilate human beings using mandatory minimum sentences, leaving our families destitute for years or decades and call that justice.”

Senate District 12 Senator Liisa Anselmi-Dalton said that registered sex offenders would have the ability to appeal a prinicipal’s decision to refuse them access to school grounds for events under the proposed bill.

The Senate passed the bill on first reading without adopting any amendments. If they pass it on two further readings without amendments, the bill would move to Governor Mark Gordon’s desk for consideration.

The House of Representatives adopted some amendments before passing the bill on third reading on a vote of 33-26 during their Monday, Feb. 24 floor session.

The initial version of House Bill 68 would have removed the second and fourth exceptions listed above, meaning that registered sex offenders wouldn’t be allowed to pick up or drop off their own children or attend extracurricular activities their children are participating in.

An amendment on first reading proposed by House District 13 Representative Cathy Connolly would have allowed registered sex offenders the ability to drop off or pick up their children or attend extracurricular activities “with the written permission of the school principal, vice-principal or person with equivalent authority.”

While that amendment was adopted, it was superceded by a separate amendment adopted on third reading on Monday.

House District 27 Representative Mike Greear’s amendment eliminates the portion of the bill related to dropping off or picking up students. Thus, registered sex offenders would still be allowed to legally drop off or pick up their children from school.

While the House ultimately voted to pass the bill, a number of representatives expressed concerns.

House District 09 Representative Landon Brown pointed out that not everyone who is registered as a sex offender has been convicted of an offense related to children.

“Not all sex offenders are predatory to children,” he said. “Anybody hears the word sex offender, we all get a little shuddery.”

Brown said he thought existing law was already sufficient and that the proposed legislation was going too far.

“I really want you to think carefully about what we are going to do,” he said. “There are good family parents ..maybe there is just good need for that parent to be in that [child’s] life.”

“We hear about local control continuously in this body. We don’t need to be legislating from the top about how to do things.”

Brown said that as he understood current law, school districts have the ability to establish policies which are more stringent than state laws preventing registered sex offenders’ access to school facilities. He said that it should be left up to individual school districts to put in place policies similar to those considered under the bill such as requiring registered sex offenders obtain written permission from principals.

He said that registered sex offenders are required to regularly report to parole officers who are also able to prohibit them from going to school facilities if they think that is needed.

“You’re not going to have people on school grounds if their parole officer doesn’t think they should [be there],” he said.

Brown said the legislation would give school principals too much power to refuse people access to schools.

“If that principal doesn’t like you, they can say no,” he said. “They can restrict the right to your child and that’s not okay with me.”

“We have rules on the books. We do not need this bill.”

Speaker of the House Steve Harshman said he thought the bill “is really needed.”

“I brought that bill over ten years ago about [prohibiting loitering within 1,000 feet of school grounds].” he said.

Harshman said that he was concerned with registered sex offenders being able to attend sports events or speech tournaments without written permission from the schools.

House District 11 Representative Jared Olsen said that he thought current law was sufficient and added that schools could ask courts to issue a restraining order against any individual they think is of particular concern.

“Statutes have already restricted rights that we are concerned with” he said. “If there is a particular actor…why not just go file for a [temporary restraining order]? I think we are going too far.”

House District 48 Representative Clark Stith said that people on the sec offender registry have to notify their county sheriff when they change jobs, addresses or even make changes to their appearance.

“Let’s imagine in the real world how this works,” he said. “If you don’t make a report, you go to prison for five years.”

Stith said that the rules under the bill could result in sending someone to prison for attending their child’s basketball game without written permission from a principal. He noted that not everyone would be immediately aware of the rules if the bill becomes law, he was concerned the legislation would unfairly punish people.

“This seems to be an overreach,” he said. “We’re going to turn in a lot of innocent conduct into a five year felony.”

House District 31 Representative Scott Clem said that he had several problems with the bill.

“What happens if someone is denied that permission?” he asked. “What is the recourse?”

He also asked practical questions about the bill. He asked what would need to happen if someone’s child was participating in a sporting event at a school out of their home town.

House District 20 Representative Albert Sommers said that such unintended consequences could be addressed in the future.

“If there are unintended consequences…we can come back and fix it,” he said, adding that he expects the Senate “will struggle with this and work on this issue.”

House District 21 Representative Evan Simpson said that he was in favor of the legislation.

“There are over 1,900 registered sex offenders in the state,” he said. “This is a safety issue. [School officials] want this in a big way.”

Brown said that he was only aware of “one case where this has been an issue.” He added that he thought the House “might as well amend the statute and make them wear something that says, ‘Hey, I am a sex offender.’”

“We do have parents that are sex offenders that we don’t want near our kids,” he said. “Those parents have court orders [preventing them from accessing schools. We are talking about the people who have paid their debts to society.”

The bill is sponsored by Representatives Simpson, Blake, Harshman, Kirkbride and Paxton and Senators Anselmi-Dalton, Baldwin, Ellis and Wasserburger.

Votes in the House on third reading were as follows: