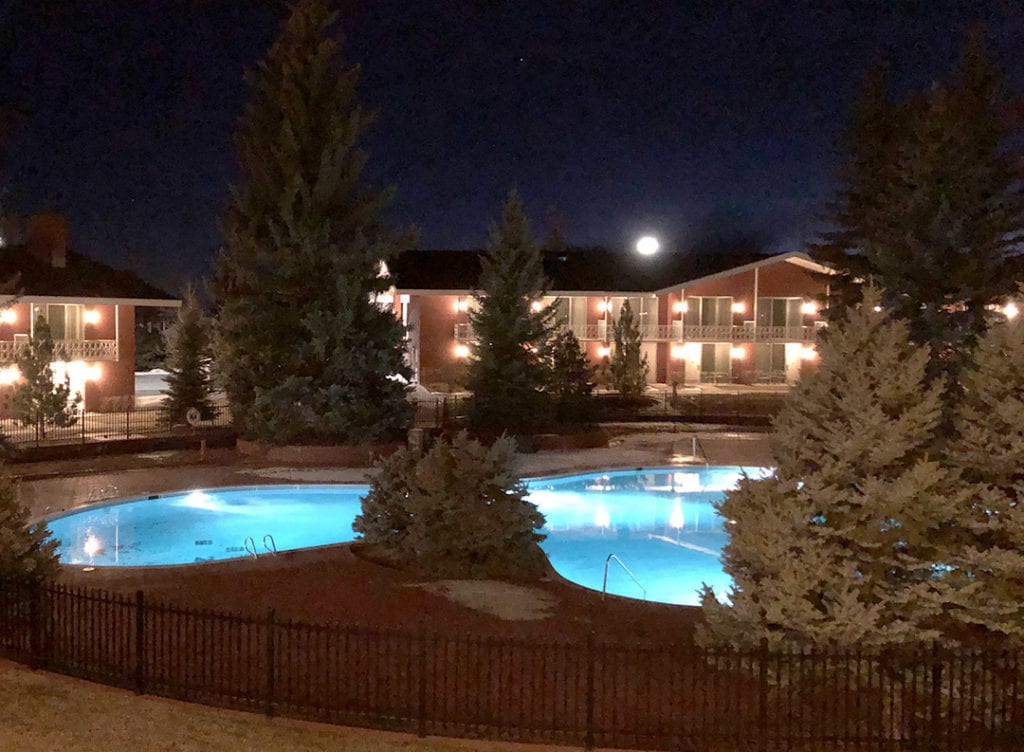 The pool of the Little America in Cheyenne is seen from one of the rooms. (Dan Cepeda, Oil City)

In addition to creating a 5% statewide lodging tax, the act creates a “Wyoming Tourism Account” in an effort to move Wyoming Office of Tourism funding off of the state’s general fund.

During his “State of the State” address at the start of the legislative session, Gordon indicated he was in support of legislation which would help better promote Wyoming tourism.

On Monday, March 2, the House held a concurrence vote to decide whether to agree with the Senate version of the bill. That vote was 47-13:

The bill would modifies lodging tax rules in Wyoming, creating a 5% statewide lodging tax. While local governments will still be able to impose lodging taxes, the maximum local rate will be reduced from 4% to 2%.

But counties will see a portion of revenues from the 5% statewide lodging tax.

Several amendment to the bill were debated in the Senate ahead of their third reading vote. Senate District 13 Senator Tom James suggested an amendment which would have done away with the lodging tax and instead fund the Wyoming tourism account by assessing up to $500 fees on all tourism vendors in the state.

“The people are very against this tax,” James said. “The government is very for this tax as well as the industry. This will eliminate the lodging tax entirely.”

He noted that his amendment would have allowed individual tourism vendors to request refunds at the end of each year if they feel that advertising and marketing their dollars would go toward had not been used in a manner they found beneficial.

James said that under his proposal, the Wyoming Office of Tourism would be able to do its job without asking taxpayers to fund their efforts. His comments hinted that James is skeptical of the value of the promotional efforts the office provides.

“Hopefully, they’ll be able to tell everyone that Yellowstone is in Wyoming and not in Montana,” he said.

“I’m against the amendment,” he said. “Advertising is an expense that is almost universal in American business. In most of the economy, you’ve got relatively large players that can afford to do their own advertising.”

“When you have an industry that has very diffuse ownership, you need some mechanism for collective action because nobody is big enough to justify the expense entirely on their own.”

Senate District 06 Senator Anthony Bouchard keyed in on Scott’s use of the term “collective action.”

“This is a free market solution or at least closer to that then what we are doing,” he said. “I think we should move forward with ideas like this.”

“This kind of does give the tourism folks what they want,” he said, adding that it “is a pretty good idea” to have private industry rather than taxpayers support tourism promotion efforts.

“Prepare for the sound of thundering hooves of pigs running to the trough,” he said. “This is a slippery slope…not what limited government is all about.”

Senate District 18 Senator Henry Coe said that he was against the amendment and in favor of the statewide lodging tax.

“This tax that’ll be collected, 85% of it will be collected from visitors to the state,” he said. “Lodging tax does not prohibit somebody from making a decision to visit the state.”

The Senate rejected the amendment on a 6-23 vote.

While a statewide lodging tax would be imposed under that proposed amendment, the amount each county would be asked to contribute would vary. In counties where lodging services sales exceed $2 million in a year, a 3% lodging tax would be imposed. This would drop to 2% for counties where lodging service sales are between $750,000-$2 million in a year.

Counties which see less than $750,000 in lodging service sales in a year would not have to pay any state lodging tax.

However, the amendment would impose a mandatory 2% local lodging tax in each county and counties would be given the option to impose up to 2% more.

“Ladies and gentlemen, I think this is fair,” Biteman said. “Yellowstone and Grand Teton are big assets for all of Wyoming. Where tourism is active, that will generate all the revenue.”

“It is an interesting concept,” he said. “Have the rich pay more and have the poor pay less. I’ve heard it quite often.”

“I don’t think we should take from the rich and give to the poor.”

Under the legislation, 80% of the statewide lodging tax will be deposited into the Wyoming tourism account, which the legislature would have to appropriate in order for the Wyoming Office of Tourism to spend.

The other 20% of revenue from the lodging tax will go into a reserve tourism account. Hicks’ amendment would instead have this 20% go to support the state’s school foundation program account.

“We all know the looming deficit that we have out there,” he said.

The state’s school foundation and school capital construction spending is facing a deficit of about $400 million.

Scott said he favored the amendment.

“This does put this 20% in a place where we all know where we are going to need it,” he said.

Senate District 12 Senator Liisa Anselmi-Dalton said she opposed the amendment because lodging tax dollars are meant to support the tourism industry, saying that giving that funding to education would be unfair to hotels and lodges which “decided to put upon themselves” the lodging tax.

“I don’t think it is fair when they are…the only ones bearing this tax,” she said. “They volunteered this. We need to keep our promise to these hotels that are doing this.”

Senate District 28 Senator Jim Anderson agreed, noting that tourism is the second largest industry in the state and that it could grow to become the largest in 10-20 years.

“This bill never was for school funding,” he said. “We don’t need to strip this from the tourism group.”

Bouchard said that providing that funding for education might make the tax more palatable to parents in the state who stay at hotels when attending their children’s sporting events.

Senate District 25 Senator Cale Case voted for the amendment, though he abstained from voting on the overall bill since he said he works in the tourism industry.

He explained that he voted in favor of the amendment because it would take money away from the state’s tourism marketing programs.

“I don’t support taxing my industry to promote my industry,” he said. “It is a really hard thing for me. This is a tough industry.”

Case says he is skeptical of claims that the majority of tourism industry in the state is from out of state visitors. Part of the argument in favor of the lodging tax has been that it would be a way to generate revenues by collecting money mainly from visitors rather than residents.

“I can tell you that I don’t have 85% out of state visitors,” Case said. “It is nothing like that at all. The people that really benefit from this are Teton County businesses.”

“This proposed tax will benefit those operators there. 4 million people went to Yellowstone last year. The tax is advocated by a lot of boards across the state. There is a kind of self interest to that that I don’t think is right. It just gets to be too much.”

He said that he was “really tired about the exaggerated claims” about how successful tourism promotion is.

“I would like to take money away from that program,” Case said.

After considering the third reading amendments, some senators spoke about the bill overall, including Biteman, who opposed the bill.

“Most of you are going to vote on the side of the lobbyists.”

Biteman offered an amendment on second reading which would prevent money collected through the statewide lodging tax from being spent on lobbying efforts. The Senate adopted this amendment.

Senate District 01 Senator Ogden Driskill said that the vote would be difficult for him. He said that tourism isn’t the only industry which asks for and receives support from the state.

“Let’s all be dead honest,” he said. “All of our major industries get benefits. Wyoming is a major tourism state and our advertising works.”

He said that with the state facing revenue problems, “We have to do something. This is an honest first step.”

“All of this tourism will definitely help somebody somewhere,” he said. “But it is missing the small rural areas. Ultimately….it is not designed right.”

“Right now, the rural areas of this state are being left out of the promotion, the help, all that goes with it.”

“I really feel like there is going to be more of a concerted effort to help rural areas,” she said.

Schuler said that speaking with constituents, she thinks people who can afford it would still choose to stay in hotels when traveling around the state if the lodging tax is hiked.

But Schuler also noted that taxes are generally low in Wyoming.

“I think we have been pretty spoiled,” she said.

When the bill first moved to the Senate, the Senate Appropriations Committee suggested an amendment which would eliminate an aspect of the House bill which would have allowed counties to impose the local lodging tax via ordinance or resolution.

The Senate adopted that section, meaning voters would decide whether local lodging taxes will be imposed.

Full details of the lodging tax bill are available online.