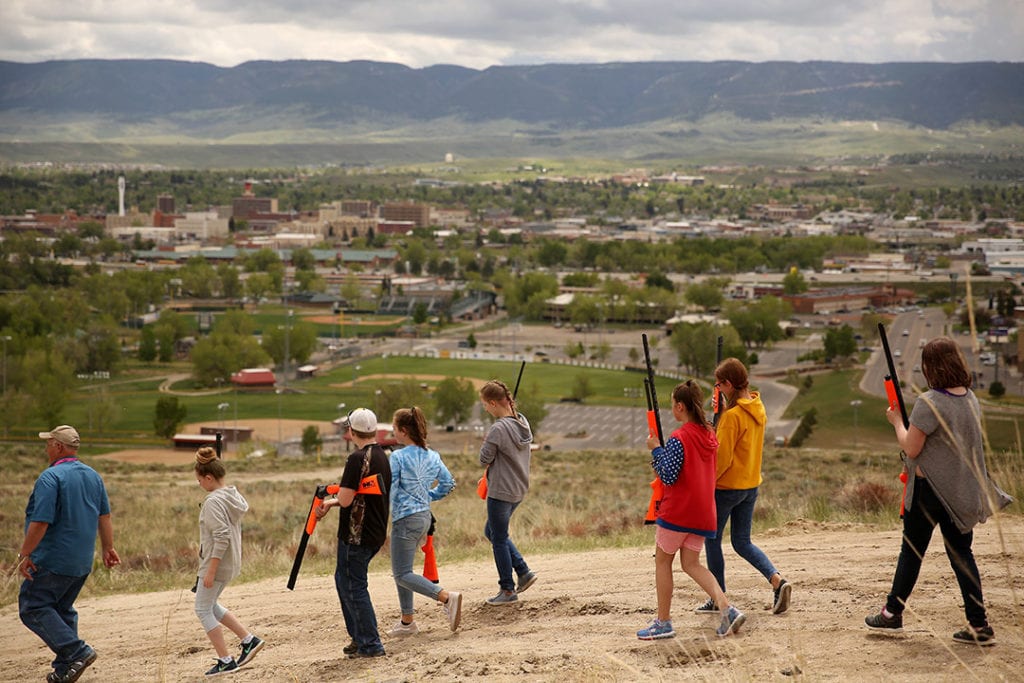 Students walk along a trail behind the Casper Events Center during hunting field training at a Wyoming Outdoors Expo in Casper. (Dan Cepeda, Oil City)

The resolution aims to encourage, though it would not require, firearm and hunter education as an elective physical education option in Wyoming. The House adopted an amendment to the version of the resolution passed by the Senate.

“Firearm and hunter education programs teach the state’s youth not only how to hunt but also how to use weapons responsibly and how to respect weapons and their capabilities while attempting to demonstrate that using a firearm is not akin to playing a video game, all of which could reduce the occurrence of severe incidents or mistakes involving a firearm,” the original resolution states.

The House amendment changes this section to state that “a firearm is not akin to depictions in entertainment.”

The resolution aims to “urge and request the game and fish commission to work with the state superintendent of public instruction and the state board of education to provide firearm and hunter education as a voluntary physical education elective in public schools.”

Under the initial proposal, the resolution would have called for the establishment of such P.E. courses specifically in high school. The Senate adopted an amendment to the resolution so that it would push for such courses in all public schools.

The resolution adds that firearm and hunter educations can include instruction in the following areas.

“Familiarity with these principles, equipment, and responsibilities can benefit our society overall and may reduce the number of gun-related accidents,” the resolution adds. “Several states including Kansas, Iowa and South Carolina have instituted programs whereby students in their middle and high schools may opt to meet their firearm and hunter education obligations through their physical education classes.”

The House’s third reading vote was unanimous with the exception of House District 21 Representative Evan Simpson who was excused while the vote was held.