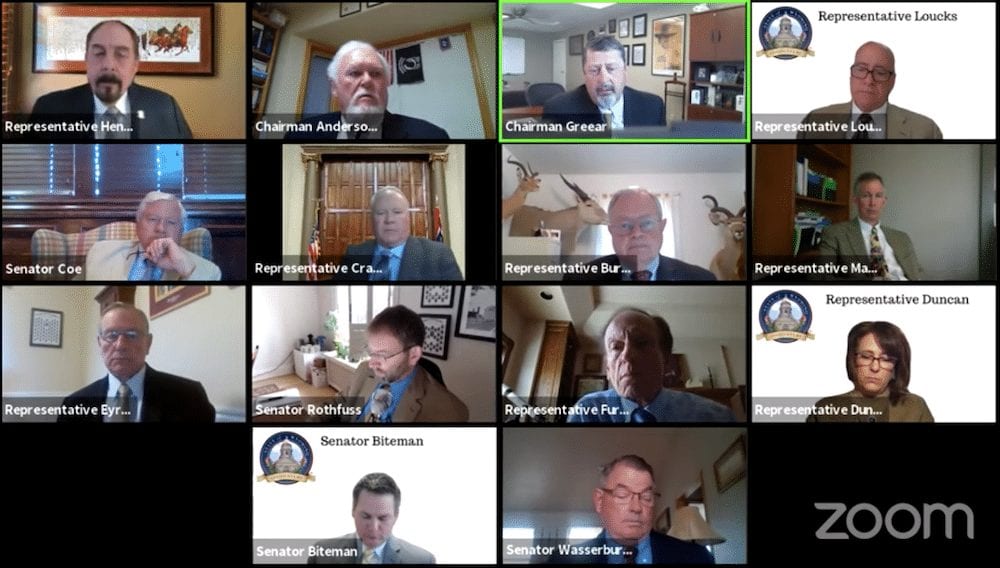 The Legislature's Joint Minerals, Business and Economic Development Committee meets on a Zoom call on Monday that is live-streamed to the public. The full Legislature will convene online on Friday, when the State Capitol will be open to lawmakers. (Wyoming Legislative Service Office/YouTube)

The Wyoming Legislature will allow some media into the Capitol for this week’s two-day special session under special guidelines the Legislative Services Office issued on Monday.

The new rules came after the Wyoming Press Association and news outlets raised concern that lawmakers would gather in the Capitol without reporters or the public being allowed in.

Lawmakers plan to meet on Friday and Saturday to determine how to distribute federal relief funding in the state. While the proceedings will be live-streamed for the public, an as-yet-unknown number of lawmakers will gather in the Capitol and join online video conferences from there. The Capitol, however, will be closed to the public for safety reasons. Speaker of the House Steve Harshman told WyoFile on Thursday the exclusion extended to journalists, who would also be limited to using the livestream.

The proclamation signed by Gov. Mark Gordon to call the special session did not include reporters among those allowed into the Capitol, a spokesperson for the governor said on Friday, according to the Wyoming Tribune Eagle.

Under the guidelines issued today, however, a limited number of reporters are allowed to enter the Capitol. They will be able to observe and photograph the proceedings only from certain seats in the galleries of the House and Senate chambers.

Even those reporters sitting in the gallery will need to follow the debate online, however. All the proceedings will be on a live-stream and the Capitol sound system will not be used, an LSO spokesperson wrote in an email to members of the press.

A “designated interview area” will be established where those lawmakers “who wish to speak to media members” can be interviewed by reporters while both parties observe distancing guidelines.

Press advocates worried that keeping reporters out of the Capitol would mean the public’s “eyes and ears” wouldn’t be present to observe off-camera interactions between legislators in the building.

“As veterans of the Legislature will tell you, much of the actual lawmaking occurs outside the chambers of the House and Senate,” the Casper Star-Tribune wrote in a Sunday editorial. “It happens in the hallways and in the alcoves, where lawmakers meet informally to devise plans and hash out compromises. When reporters are there, the public can be part of this process.

The Wyoming Press Association wrote a letter to Harshman and Senate President Drew Perkins (both R-Casper) on Thursday night requesting press access. “The WPA understands that public safety may behoove the Legislature to bar the public from the Capitol,” the letter read, “but this makes the presence of the media even more important so that it can serve as the ‘eyes and ears of’ citizens who cannot attend the Special Session.”

In response to that letter, both Perkins and Harshman indicated the Legislature would make accommodations for reporters.