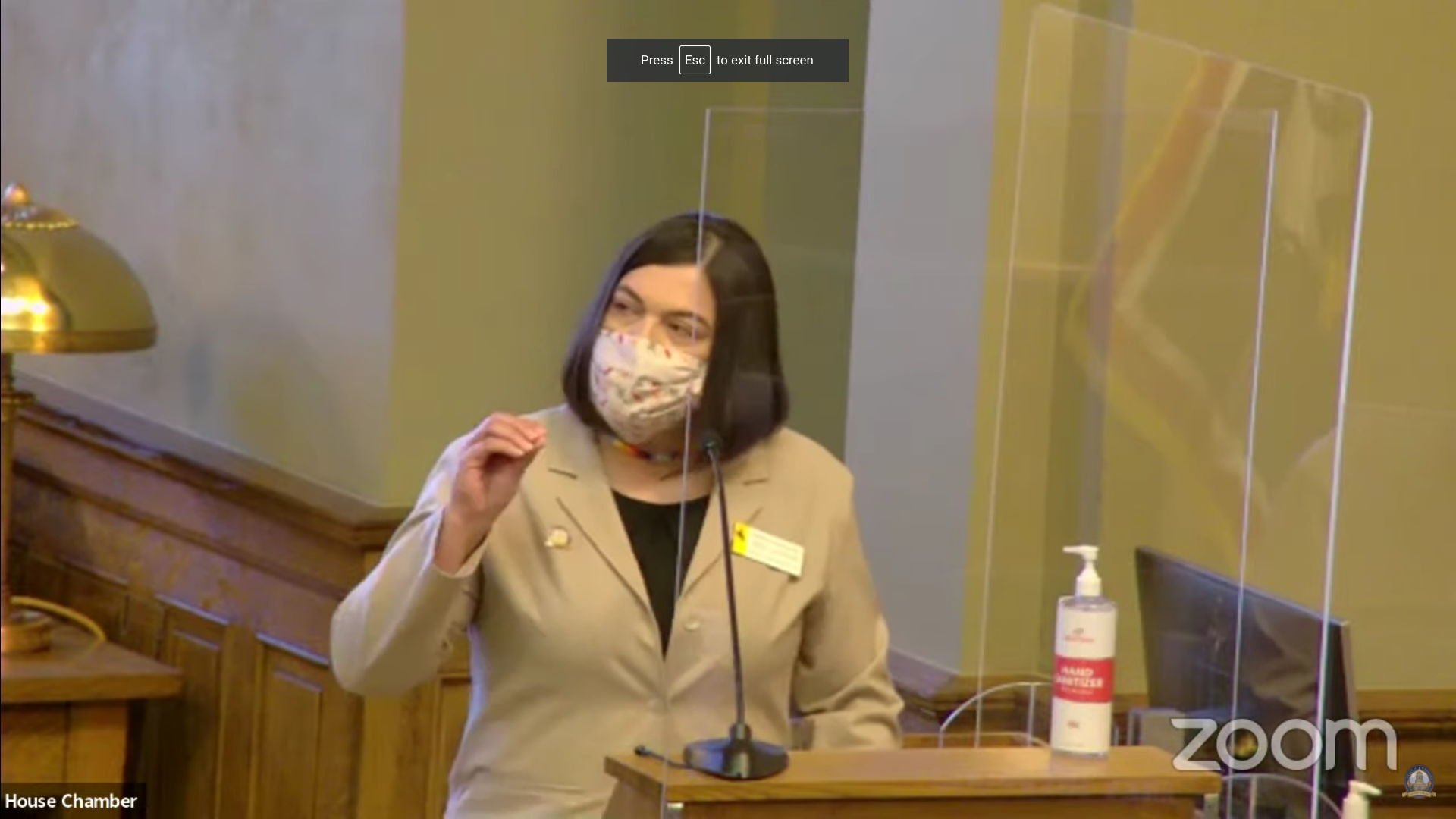 CASPER, Wyo. — Rep. Andi Clifford (Fremont County) is the first female member of the Northern Arapaho Tribe to be elected to the Wyoming House of Representatives.

Clifford said during the House’s third reading debate of House Bill 75 that the legislation would disenfranchise voters.

“What this bill does is pose a real threat to our democracy,” Clifford said. “I don’t want to be the first Northern Arapaho woman and the last to serve in this body.”

Clifford said she has “a deep understanding of the power of elections and the power of voting. I also have knowledge and experience around the history of voter suppression and all the ways Wyoming has lived up to and failed to live up to our basic ideals and aspirations.”

“If it wasn’t for the landmark Voting Rights Act of 1965, which forbade racial discrimination in voting rights, I probably wouldn’t be standing before this body here today,” she added.

She said the bill could potentially discourage people from voting if it becomes law.

“I worked as an advocate on the Wind River Reservation for a long, long time, trying to increase voter access and voter participation,” Clifford said. “I would tell my friends and families, ‘If you don’t vote, if you don’t participate, systems will not include you. It is a matter of knocking down structural barriers. Your vote is your voice.’ I whole-heartedly believe that and I believe when we get people civically engaged, it enables a more diverse pipeline of political balance. Especially for people of color and those less fortunate.”

“I think when you look at how our election structure works, we need to do everything in our power to encourage voting, especially with our young people, our new people, our people of color and those less fortunate. The bill doesn’t encourage that. We want more people to participate, not less. By passing this bill, it unequivocally equates to voter suppression and imposes a restriction on voting access.”

Clifford noted that the state saw record voter turnout in 2020 and that widespread fraud was not reported.

“Wyoming was not inundated with fraud that cheated any of our colleagues who no longer sit among us on this floor today out of victory,” she said. “We who are in this chamber today have been duly elected to serve because our elections were secure.”

Rep. Dan Zwonitzer (Laramie County) said he didn’t think the bill would disenfranchise any voters thanks to amendments the House adopted on second reading.

He said the “only question” the bill raises is whether legislators want to list the acceptable forms of voter ID in statute or allow the Wyoming Secretary of State’s Office to establish acceptable forms through their rules and regulations.

Zwonitzer said that about 96% of people voting in Wyoming use driver’s licenses as ID when registering to vote. He said that the other 4% “might be the eldery….might be student….might be people who don’t have a driver’s license for some reason.” He said that with the amendments passed on second reading, he didn’t think anyone would be left out.

“I don’t believe this suppresses anyone,” he said. “I may have agreed with that before the second reading amendments.”

Zwonitzer added that if anyone is unable to provide an ID as proposed under the bill, they would still be able to get a provisional ballot.

The following forms of ID would be allowed for people voting at the polls under House Bill 75 with the second reading amendments:

Rep. Chuck Gray (Natrona) said he supports the legislation because “it is important that we continue our election processes to ensure public confidence and the more confidence people have the more they will participate. That’s what we all want. This is a best practices issue.”

Rep. Karlee Provenza (Albany County) said that she thought the bill was looking to solve a problem that doesn’t exist.

Rep. Evan Simpson (Lincoln County) said he thought the bill should have advanced without the amendments allowing out-of-state driver’s licenses and student IDs. However, he said he supports the idea of requiring photo IDs at the polls.

“I think we would all agree that our world has become very complicated,” Simpson The good old boy way of doing things has unfortunately gone by the wayside in many regards.”

He said that people are used to being asked to show their IDs in other situations such as at the airport or when buying cigarettes.

“This is standard practice in our society anymore…..It just makes sense that we conform with the rest of the world in proving our identity,” Simpson said.

Rep. John Eklund (Laramie, Goshen) said that while he doesn’t think there is voter fraud in Wyoming, he still supported the legislation.

“In recent years, we’ve found that there has been little, if any, fraud,” he said. “I really trust our election officials. I think they are really straightforward and honest.”

Rep. Robert Wharff (Uinta) said that he thinks Wyoming should lead by passing the legislation.

“We’ve led the nation several times,” he said. “Look at women’s suffrage. That’s something Wyoming is very proud of and we should be proud of that. And I think this is a similar situation. I think we lead by example.”

“We don’t have a problem, I don’t believe, in our state. That doesn’t mean it can’t come here.”

Rep. Steve Harshman (Natrona) said that he thinks many people go to the polls for the first time assuming they’ll need to show ID.

“As a kid in Wyoming when I first voted, I was kind of surprised I didn’t need ID when I voted,” he said, adding that students he works with have expressed similar surprise.

He said that with the legislation as amended, he thought the state’s voter ID requirements would be in “a good spot.”