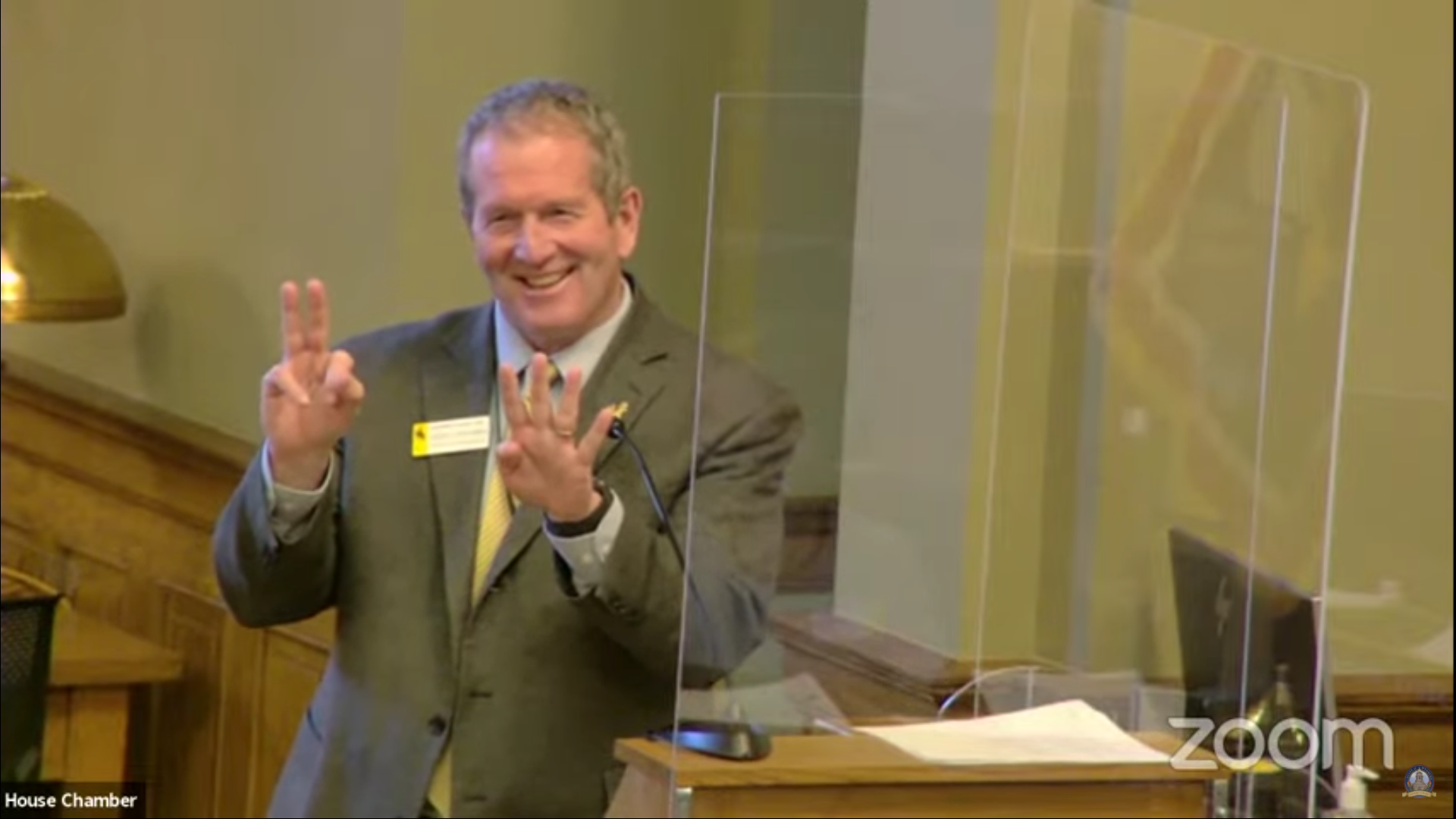 House Revenue Committe Chair Steve Harshman laughs as he shows the number 6 with his fingers in an unusual way as he tries to explain what House Bill 174 would do in terms of 5th, 6th and 7th penny local sales and use taxes. (Wyoming Legislature, Youtube)

The Wyoming House of Representatives are working on a bill that would potentially make the so-called “fifth penny” tax permanent in every county.

That would happen if several things occur:

The House is working on two related pieces of legislation that concern a proposal to impose a one-cent statewide sales tax to shore up education funding if and only if the “rainy day” fund were to drop below $650 million.

The state is facing a $300 million annual structural deficit to education funding in the School Foundation Program which the House is working to address through House Bill 173. The House passed that bill on first reading on Thursday (details in this story) before taking up debate on House Bill 174.

House Revenue Committee Chair Steve Harshman (Natrona County) said that House Bill 174 aims to ensure local government funding through the optional sales and use taxes would not be disturbed by the proposed statewide “education penny.” He said that a one-percent sales tax is generating around $160 million a year currently in Wyoming.

While House Bill 173 proposes cuts to education spending and proposes re-directing existing revenue streams to fund education, it also proposes the “education penny” statewide sales and use tax as a last resort.

Since the state’s rainy day fund (LSRA) has a minimum balance in state law of around a half a billion dollars, the fund would not be available to help with the School Foundation Program shortfalls that are projected in recent years.

If cuts to education and re-directing revenue from other sources are not sufficient to prevent the rainy day fund from dipping below $650 million, the “education penny” sales tax would be imposed across the state. That would happen under House Bill 173.

If the “education penny” were imposed, House Bill 174 would make the first local penny permanent across the state.

Harshman explained that it would also allow county commissioner to approve a second local penny (or put the question before voters) and would allow a third local penny to be imposed if approved by voters at the polls.

Harshman said the legislation is important because sales and use tax revenue is the key revenue stream for local governments, “particularly for cities and towns.”

He said that Wyoming’s average sales tax rate across the state is 5.4% which is the 44th lowest among the 46 states (including Washington D.C.) which have a sales tax. (Note: total sales tax differs from county to county in Wyoming. While the 4% statewide tax applies everywhere, some counties have adopted some of the optional local sales taxes while others have not).

Harshman said that 21 of 23 counties in Wyoming impose the first local penny. Under existing law, that tax can initially be imposed only with voter approval. Once voters approve it, county commissioners can choose to either renew it or can periodically put the question of whether to keep it in place before voters again.

House Bill 174 would make the first local penny (commonly called “fifth penny”) permanent (by vote of county commissioners) in every county if the “education penny” were to be imposed.

Harshman said that an additional penny sales tax statewide (the education penny) would make Wyoming 30th in terms of highest sales tax in the country.

Rep. Donald Burkart Jr. (Carbon) asked whether the legislature would continue to provide direct distributions to local governments if House Bill 174 were enacted and the fifth penny were made permanent.

Harshman said his preference would be to move away from the direct distribution to local governments, though this would be up to the legislature as a whole.

He said that if the state finds itself in a position where the rainy day fund dips under $650 million there would be a need to offload funding the state provides to local governments.

Rep. Shelly Duncan (Goshen) said she supports the approach House Bill 174 would create, though she said the bill initially confused her.

“Now I am a huge yes,” she said. Duncan said that the proposal would give local governments more tools to decide for themselves what level of sales and use tax is needed.

Rep. Christopher Knapp (Campbell), however, said the legislation could be a “poison pill” that would make it harder for local governments to convince voters to approve of local sales and use taxes by making the fifth penny permanent.

Harshman said he believes local governments are “strongly in favor of this bill” and encouraged representatives to speak to people in their local communities about the concept.

Rep. Art Washut (Natrona) asked what would happen if the rainy day fund were to dip below $650 million (thus enacting the “education penny” and making the local “fifth penny” permanent) but then climb above $650 million again: “Does the tax go away?”

Washut did not receive an answer to this question during the House’s first reading floor session debate.

Zwonitzer said larger communities like Cheyenne and Casper would be more able to withstand cuts to direct distribution, but that small towns could be severely hurt.

He said that the House should pass House Bill 174 if direct distributions will be cut: “Better have this in place or your small towns are going to go away.”