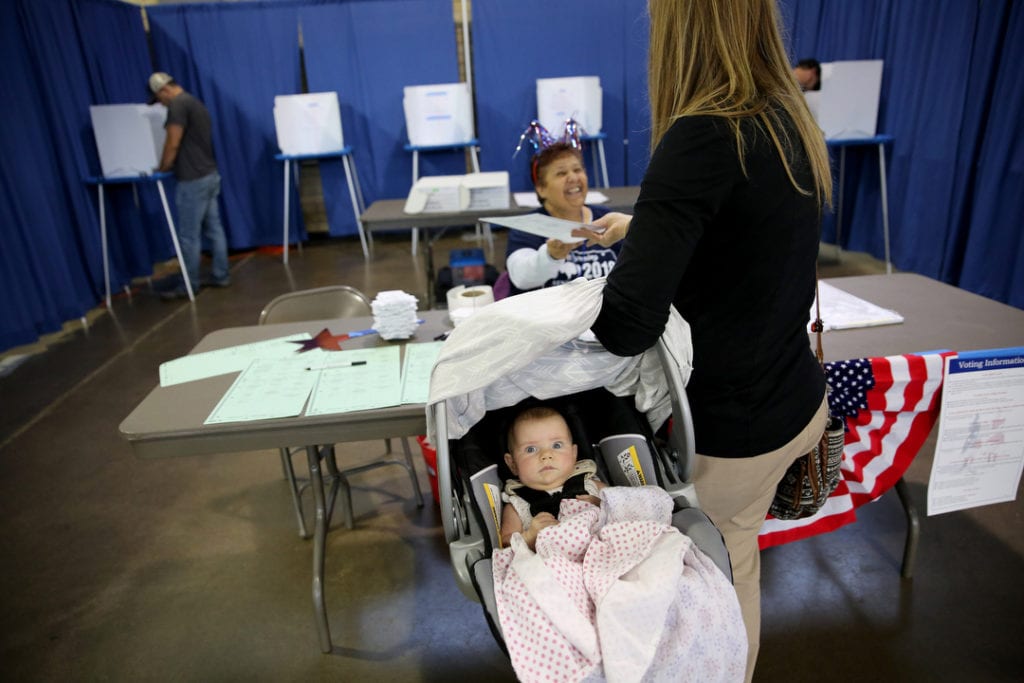 Rebecca Lewarchik picks up her primary ballot while holding her 3-month-old daughter Linley in the Industrial Building at the Central Wyoming Fairgrounds on Tuesday, Aug. 21, 2018 in Casper. (Dan Cepeda, Oil City)

CASPER, Wyo. — The Wyoming House narrowly passed House Bill 179 during their floor session on Friday, March 12, legislation which would allow cities and towns to ask voters to approve a municipal sales and use tax at special elections.

Legislation passed in 2020 enabled Wyoming municipalities to impose a one-cent sales and use tax for general or special purposes (so-called “seventh penny”) if approved by voters in a county which has enacted a “sixth penny” sales tax. However, that legislation required that a question be put before voters only during a general election.

House Bill 179 would allow municipal tax questions be put before voters in the same manner as bond elections. Voting could occur during any of the following times:

Styvar said that during a past bond election on whether to approve a $3.1 million bond levy in House District 12, only 213 people turned out.

“We need more people to get out and vote,” he said. “That happens during a general election.”

Rep. Dan Zwonitzer (Laramie County), who along with Sen. Cale Case (Fremont) is sponsoring the legislation, said that the legislation was important because it would give municipalities flexibility to ask voters to approve funding for important projects like road construction, new fire stations, fixing potholes or an “economic development quarter of a cent to try to get people to stop in our town next to the interstate.”

Zwonitzer said he thinks Wyoming is among the most “severe” states in terms of restricting counties and municipalities from raising their own revenues, possibly even the most restrictive state in the country.

He acknowledged that special elections can have lower turnout, but said he thinks municipalities would not abuse the system since there could be massive pushback from the public if they were to attempt to “play games” in getting a municipal tax approved by voters.

“I don’t think cities are just going to throw these out on the ballot lightly,” Zwonitzer said.

He also argued that the municipal tax which cities and towns could ask voters to approve is perhaps the most transparent, accountable form of taxation that exists.

“It is up to that local citizen level with their local elected officials doing every possible locally elected, small government, closest to the people, accountable, transparent tax,” Zwonitzer said. “I think it not going to be used haphazardly.”

Rep. Pat Sweeney (Natrona) said he thinks the idea that municipalities would abuse the system in intentionally working to ensure lower voter turnout is false.

“For us to sit here today and not have trust in our own constituents to turn out for an election I think is kind of bizarre,” he said. “You’re almost accusing them of electioneering, our municipalities. That’s not the case.”