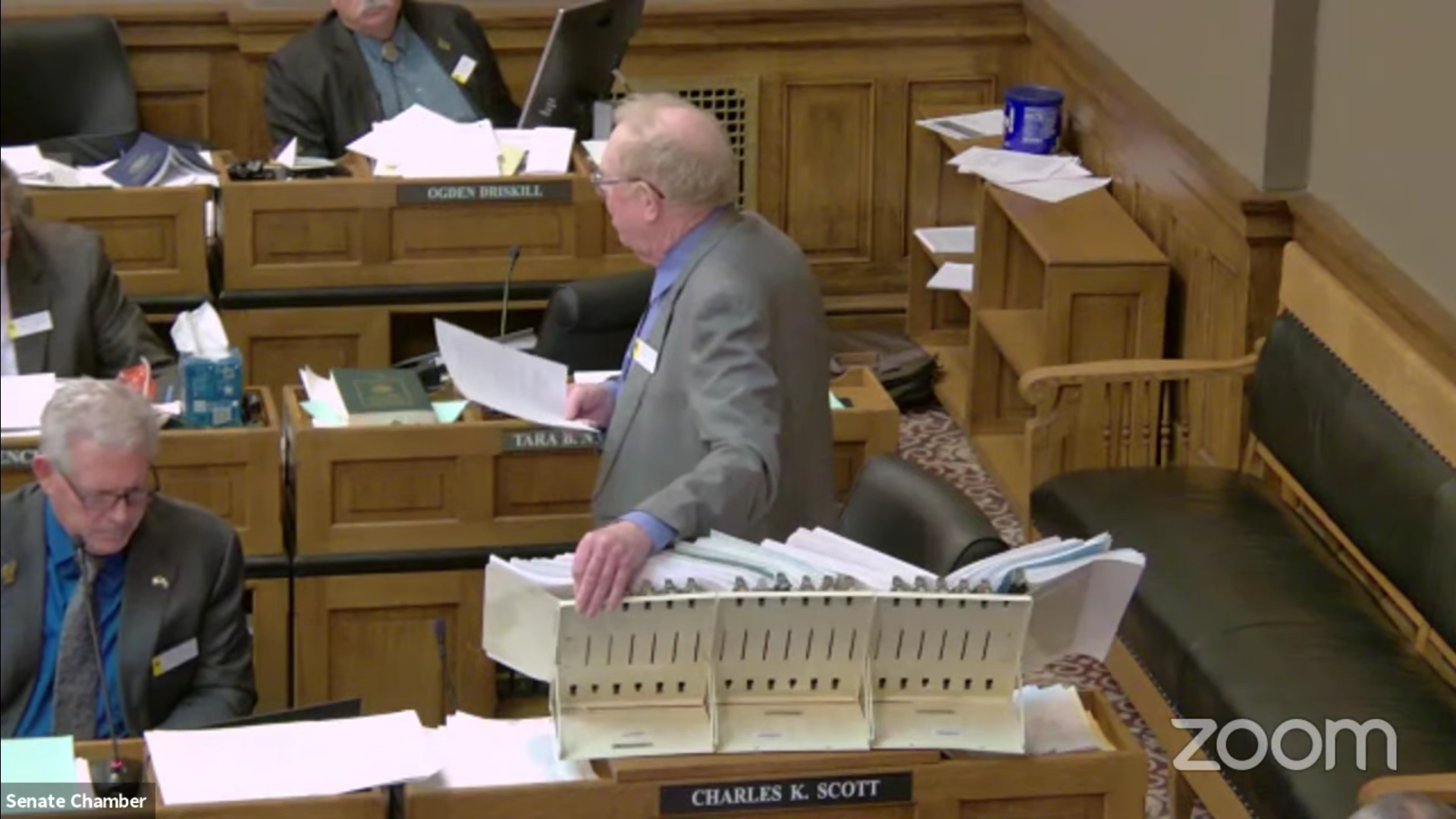 CASPER, Wyo. — The Wyoming Senate are in the process of considering House Bill 173, legislation which aims to modify the way the state funds K-12 education.

The bill as passed in the House of Representatives included a number of provisions to address a deficit for K-12 education funding in the state, including spending reductions, diversions of revenue from other sources to education, federal stimulus funding and a provisional “half-penny for education” sales tax.

Sen. Charles Scott (Natrona County) proposed an amendment on second reading of the bill on Thursday, April 1 that would add a sales and use tax to help fund K-12 education back into the bill.

Scott, who voted against his own amendment, said he was proposing it because he thought the Senate needed to have a “clean vote” on whether they support a tax for education. He said that the amendment which stripped out the House’s tax proposal included other changes besides the tax and that the Senate’s vote on that amendment was therefore not about the tax proposal in isolation.

The tax proposed under Scott’s second reading amendment would also be a “half-penny for education,” but unlike the House’s proposal, the tax would have been implemented effective July 1, 2023 and would not need to be triggered by the state’s “rainy day” fund dropping below $650 million.

“It is imposing a tax essentially after the next General Session,” Scott explained.

He noted that the legislature has been limited in terms of making cuts to K-12 education this session by federal rules under the “American Rescue Plan Act of 2021.” In order to receive federal funding provided under that act, states are required to maintain support for education at levels proportional to the state’s average education spending from fiscal years 2017-2019.

Because the requirement for states to maintain funding for education under the American Rescue Plan Act of 2021 lasts through fiscal year 2023, Scott noted that the legislature could look at making larger cuts to education during their 2023 General Session.

“What I would say is that if you feel that now is the time to commit ourselves to raising taxes to pay for education, this is your amendment,” Scott said. “If you feel that either we should not raise taxes until it is clear there is a need and we have been unable to reduce the education funding enough, which we can’t do right now because the federal maintenance of effort requirements in the stimulus, then you should be a no vote on this amendment.”

Scott said he would vote against his own amendment because he thinks the legislature first “ought to have a crack at getting our spending under control.”

Senate Minority Floor Leader Chris Rothfuss (Albany) said he was in favor of a tax for education spending, but said he thought the way the tax was being proposed was a political maneuver to try to show the Senate’s opposition to such a tax.

“This is a pretty disingenuous effort in my opinion to get a vote count that just shows that this chamber opposes new taxes at this time,” Rothfuss said. “I don’t think this is the way to do it. If we are serious about new revenue, we bring new revenue bills.”

Rothfuss said he would vote in favor of the amendment “because I get to vote aye and I will not lose my election.”

But he said that the House’s proposed tax was something more in line with what he thinks people in Wyoming support — a tax that would be triggered when the state’s savings are low.

Rothfuss said he thought Scott proposing an amendment for a tax and then “giving a speech about how we should all oppose it and then throwing it out for the body to I guess fall on a spear for” was not the right way to legislate.

“Let’s be serious about it,” Rothfuss said.

Sen. Dave Kinskey (Sheridan, Johnson), on the other hand, express support for Scott’s approach, though he also voted against the proposed tax.

“I don’t think this attempt is disingenuous, I think it is ingenious,” Kinskey said. He said he “welcomed the opportunity” to go on the record in opposition to a tax.

He said he was opposed to the tax and thinks that the legislature instead needs to figure out how to get education spending “under control.”

Sen. Brian Boner (Converse, Platte) said he was against the idea of passing legislation with a tax that would only be triggered depending on the state’s savings picture. He said that if the legislature wants to implement a tax increase, they should do so directly and not create a tax that could be triggered during the term of future legislators who didn’t vote for its implementation.

Sen. Cale Case (Fremont), chair of the Senate Revenue Committee, said he was in favor of the tax proposed under Scott’s amendment.

“We really are facing a significant shift in the way the world economy works, what we sell, what we can tax, how our tax structure works and how we are going to provide services in the future,” he said. “I am very worried about that.”

“We are a very low tax state….I do not see the world flocking to our doors because of our low taxes. I worry about our roads, our education system, our colleges, our community services, our healthcare.”

Case said there is always an easy argument to vote against tax proposals: “It doesn’t take much excuse to vote against it.” But he said that something needs to be done in terms of finding new revenues: “My job [as chair of the Senate Revenue Committee] is to tell you we need a new tax strategy in Wyoming’s future and I support this.”

Senate Vice President Larry Hicks (Albany, Carbon, Sweetwater) said that he recognizes the state has serious issues surrounding diminishing revenues. However, he said he was opposed to a tax specifically “earmarked” for education.

With the state facing challenges finding sufficient funding in many areas besides education, Hicks said he thought it was “irresponsible” for the legislature to raise a tax dedicated to funding one specific area.

Scott said that the vote on his amendment was something the Senate owed to the House.

“I brought the amendment because I felt our colleagues deserve a clear yes or no vote,” he said. “I think what we need to tell the House is we really need to get our expenses under control before we go back to taxing more.”

“This gives a clear vote for your constituents to judge you on.”

Scott said that he thinks the “education of our children is the most important function that our state and local governments perform. We as a legislature have some serious work to do in these areas.”

He said that further amendments may be needed to House Bill 173 ahead of the Senate’s third reading vote and asked that senators look closely at the bill.

Further details about the legislation is available in this story.