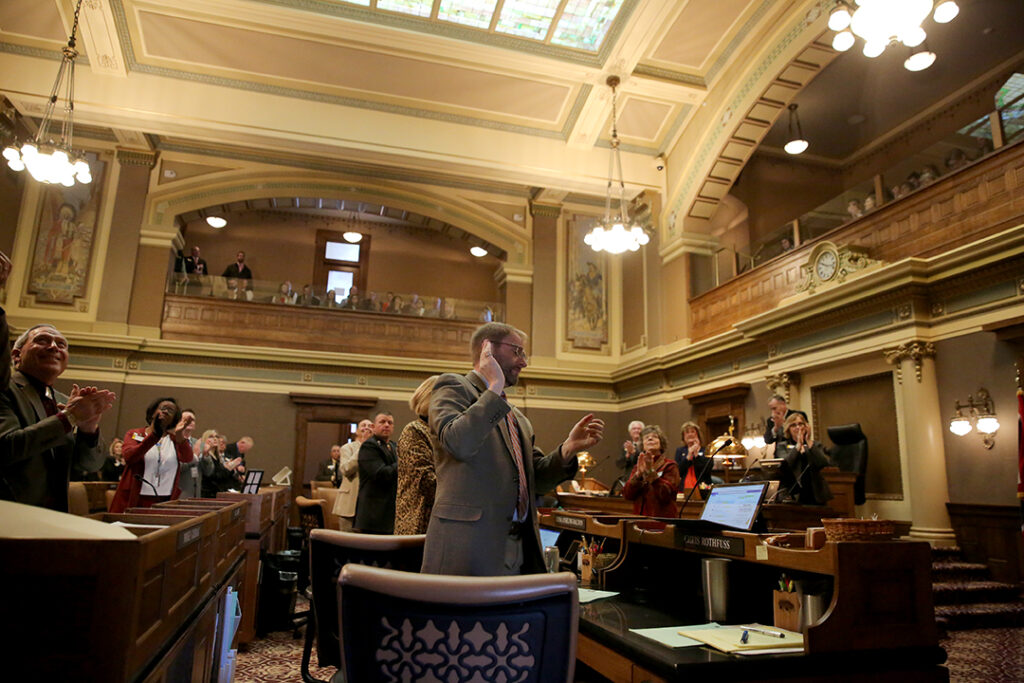 CHEYENNE – As a restless nation took to the streets for police reform in 2020, then-statehouse-candidate Karlee Provenza — a Laramie Democrat — traveled the streets of Wyoming’s third-largest city on a campaign of her own.

A PhD candidate in criminal justice at the University of Wyoming, Provenza had a personal relationship with the national conversation on redefining law enforcement. In the wake of the controversial police-involved shooting of mentally ill man Robbie Ramirez in her community in 2018, Provenza organized a police reform group, Albany County for Proper Policing.

On the campaign trail, Provenza pitched voters on a promise of not only delivering a progressive and working-class perspective to the Legislature, but on helping to reform the very thing that spurred her own activism: what she considers an oversight in the system. That oversight, she said, allows officers with patterns of misconduct elsewhere to serve in Wyoming.

This session, Provenza set out to deliver on those promises with House Bill 247 – Law enforcement hiring practices, a bill that would prohibit the hiring of peace officers with a “history of serious misconduct.”

Though counting just two co-sponsors and initially failing a third reading vote in the House of Representatives, Provenza’s bill was recalled and passed by a narrow 31-24 vote to advance to the Senate, marking perhaps one of the most significant police reform actions by the House in more than a decade.

But with HB-247 as the final bill on the Senate Judiciary Committee’s list for the year, its members declined to make a motion on it, effectively killing the bill. Another piece of Provenza-sponsored legislation regarding law enforcement — House Bill 213 – Disclosure of peace officer recordings — failed to even get a hearing in the House, dying in her own committee without a vote over concerns about the definition of “serious misconduct,” fears the legislation could create undue bureaucratic burden on departments and other worries.

The latter bill would have created a much-needed standard for tracking and releasing records of peace officer conduct in the field, Provenza said, which she said currently does not exist.

In the wake of the bills’ demise, Provenza said the conversation around policing has drastically changed with the larger, national conversations on police accountability in the past year. Those changes, she added, could create new barriers to enacting meaningful reform in Wyoming.

“Before George Floyd — when Robbie Ramirez was killed, and when Albany County for Proper Policing was formed — we had a ton of support from Republicans,” Provenza said in an interview midway through the legislative session. “I’d say 60% to 70% of our base were Republican voters. To me, that conveyed this isn’t a political issue, that it’s a community issue. But then George Floyd happened, and the national conversation really impacted how people looked at police reform in the state of Wyoming. No longer is it a transparency issue that conservatives can get behind — now it’s a racial issue that only liberals can get behind.”

But critics argued there were problems with the bills. The premature release of body cam footage from HB-213 could create a “public trial” without the chance for due process and overrule an existing disclosure protocol already in statute, Wyoming Highway Patrol Col. Kebin Haller said during his March 10 testimony on the bill.

The reasons for opposition to HB-247 were less clear as the bill received little floor debate. However, in committee, lawmakers like Rep. Ember Oakley (R-Riverton) expressed concern the bill could create due process issues for law enforcement officers whose licenses are up for revocation — a concern later addressed in an amendment by Rep. Barry Crago (R-Buffalo) at the committee level.

“We don’t get to write law that — without findings — assumes [someone who is under investigation who leaves the force] is a guilty plea,” Oakley said.

Criminal justice reform has been a pet topic of the Legislature’s Joint Judiciary Committee in recent years.

In the last several sessions, the committee has examined reforms to sentencing, the severity of criminal penalties and alternatives to incarceration intended to rehabilitate, rather than punish, those who end up behind bars. In many instances, lawmakers have been successful in those ambitions, successfully passing major reforms to the state’s youthful offender program, creating alternatives to incarceration for certain motor vehicle and alcohol crimes, providing quicker pathways for inmates to qualify for parole andmaking it easier for criminal defendants to qualify for representation by a public defender.

But while the Legislature has been amenable to address the more punitive elements of the state’s criminal justice system, reforming the mechanism that put those people into the system in the first place — law enforcement — has historically been lower on the list.

Though Provenza said policing practices have been largely unmodified since the establishment of Police Officer Standards and Training in 1991, WyoFile has identified just eight bills considered by the Legislature in the past decade that would amend statutes regulating practices of law enforcement. Four passed, including bills to clarify the role of officers employed by Game & Fish, creating a disclosure process for the public to access body camera footage, disallowing parole officers to personally perform arrests and requiring peace officers to notify a juvenile offenders’ parents of their charges.

Though lawmakers have passed some reforms —  notably 2017’s body cam bill, SF-32 — limitations in the legislation have been tested in recent years. Last April, a man in Platte County was killed by police at the scene of an alleged domestic dispute. In a hearing on Provenza’s HB-213, family members of the man who was killed, 36-year-old David Cain, said they had been stonewalled in their attempts to access the footage.

“Between DCI and the Platte County Sheriff’s Department, [the departments] made it a game between going back and forth calling them for several weeks,” Cain’s nephew, Salvador Jimenez, told lawmakers in a March 10 hearing on the bill. “They would never give us clear direction on accessing the footage. They would just make it an overall difficult process and had a way of making it seem like we weren’t allowed to see the video at all.”

That testimony contradicted earlier assertions by their state representative, Rep. Jeremy Haroldson (R-Wheatland), that the family did not want people to be able to easily access the footage to avoid being re-traumatized by reviewing evidence of the incident.

Though that bill was defeated, Provenza’s HB-247 had slightly more success in the House this session, advancing all the way to the Wyoming Senate.

Cara Chambers, director of the Division of Victim Services within the Wyoming Attorney Generals’ Office, told lawmakers the legislation would create programs similar to ones already in place in other states. She added that according to officials with the office of Police Officer Standards and Training — which is responsible for the certification and decertification of police officers — it would be relatively straightforward to implement, largely due to Provenza’s close work with the agency’s director, Chris Walsh, in drafting the language of the bill.

Walsh declined comment for this story, citing a desire to stay neutral on pending legislation.

“We think it’s important to make sure that law enforcement agencies have the tools to address misconduct concerns within their agency and then, more importantly, to make sure that on a state level that these issues are brought to the POST commission,” Chambers said in an interview. “That doesn’t always happen. I think what happens is individuals who ran into some trouble move on to other law enforcement agencies and it’s hard to track if they have had serious misconduct issues. This bill was really designed to create some uniformity.”

The bill ultimately failed in the Senate Judiciary Committee on March 31.

Though tailored to create uniform standards for law enforcement statewide, Provenza’s bills were, at the end of the day, responses to local issues. HB-247 came as the result of a years-long effort at reform in Laramie following Ramirez’s death, while HB-213 was the product of concerns in Platte County around still-lingering questions surrounding Cain’s death.

While the intent of Provenza’s legislation is to ensure uniformity, advocates for law enforcement have argued that uniformity in standards is already ensured through the state’s police academy, and that additional compliance requirements would create an undue bureaucratic hurdle for smaller agencies.

“I would offer on a lot of stuff we are way ahead with our level of work on issues that, frankly, a lot of states can’t even get a grip on or can’t get all of the necessary people in the room to talk about,” Byron Oedekoeven, the executive director of the Wyoming Association of Sheriffs and Chiefs of Police, said in an interview.

But Provenza says that current standards fall well short of a level of transparency the public needs to truly hold law enforcement accountable, particularly as the more than 30,000 law enforcement agencies across the United States continue to evolve in the wake of last summer’s protests.

“Wyoming is a black box of data,” she said. “You don’t have access to the information necessary to know what the training is. I have records of all law enforcement in the state of Wyoming certified under POST in terms of their hours of training, and there is a huge emphasis on firearms in there. Not so much on other things. But it varies by department. You might have an agency head who wants their officers trained on dealing with sexual assault — how to talk to victims — or you might have someone who emphasizes crisis intervention teams training. In terms of how we compare nationally, it’s really hard to say, because we just don’t know.”

The conversation around police reform, as far as the 2021 legislative session is concerned, has ended. But Provenza says the larger discussion is just beginning. In Albany County, the Laramie City Council is looking into the creation of an ad hoc working group for police and community concerns to address community concerns around policing into the new year. Meanwhile, lawmakers in the House Judiciary Committee are working to convince their Senate colleagues to take up police reform in the interim, with Provenza currently leading efforts to convince her peers that reform is needed statewide — not just in cities like Laramie.

I think it’s really easy for some folks to say ‘oh, you’re just trying to deal with Derek Colling,’” she said. “But at the root of all this is a problem in our law enforcement’s record-keeping that we need to tackle.”