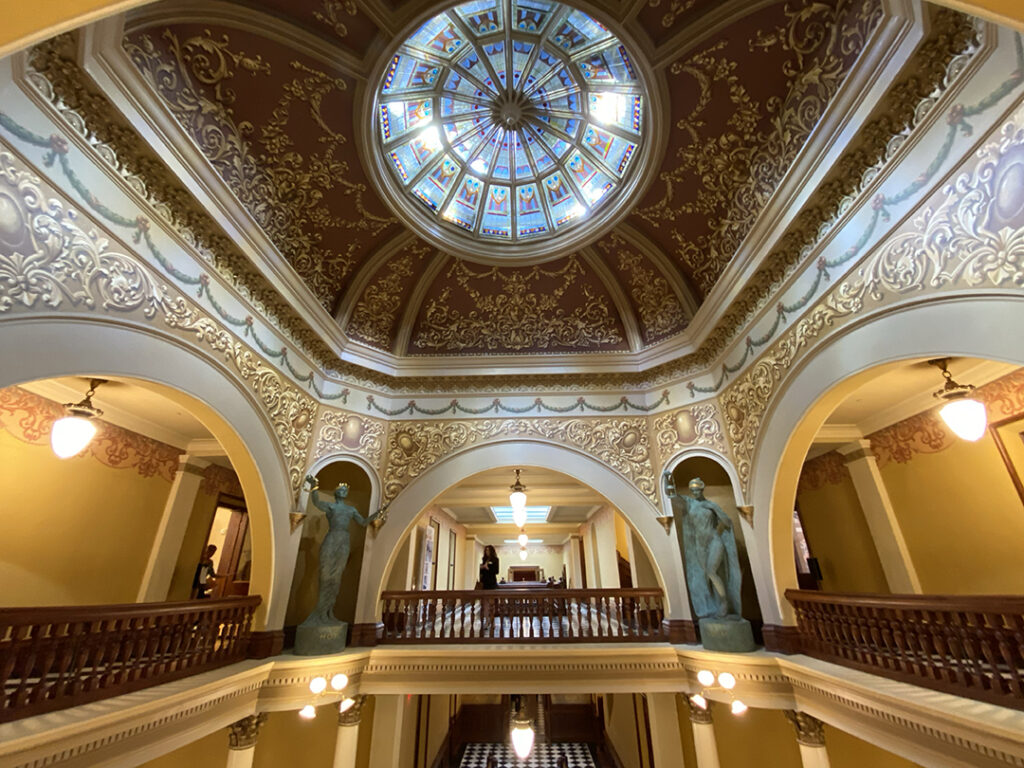 The Wyoming Legislature entered the 2021 legislative session with a lofty agenda to cut education spending, stall revenue declines and guide a Wyoming economy battered by COVID-19 to a sustainable future.

But in one of the longest legislative sessions in history, lawmakers accomplished few of those goals. While ratifying significant cuts to government previously proposed by Gov. Mark Gordon, they killed numerous proposals to raise revenues to offset those cuts. And with education funding a top priority, an education funding reform bill died on the negotiating table on the session’s final day, prompting Gordon to announce he will take an active role in future discussions.

Gordon was also prompted to intervene, he said, by the continued decline of fossil fuel-based tax revenues and what he described as “uncertainty” the Biden administration has created for states like Wyoming that depend heavily on fossil fuels.

“It is something that, during the session, I asked for legislation to deal with,” Gordon told reporters on a press call last week. “We did pass a few pieces of legislation on … that front. But we ended the Legislature much as we began the Legislature: with serious financial difficulties ahead of us.”

When the Wyoming Legislature received Gordon’s proposal for mid-cycle adjustments to this year’s budget in November, appropriators in the House and Senate said they felt confident in their ability to cut even more from a government many conservatives in their membership believed was still bloated.

On top of 15% cuts to most government agencies — the largest dollar amount from the Wyoming Department of Health — Senate negotiators sought to impose even deeper reductions and did. Members of the House of Representatives also proposed their own, additional cuts on top of Gordon’s.

Legislators in mid-March signed a budget bill that included nearly all of Gordon’s cuts but few of the Legislature’s, primarily due to the arrival of federal funding from the American Rescue Plan and improving oil prices. Oil saw sharp year-over-year increases in February and March according to a report released last week by the Wyoming Department of Administration and Information’s Economic Analysis Division.

Meanwhile education funding — one of the largest draws on the state’s savings — seemed to be set up for the broad reimagining long-sought by the state’s budget hawks. Leaders this session, particularly in the Senate, committed to a proposal to slow education spending’s sharply escalating share of the state budget in recent decades.

Shortly into the 2021 session, legislative leaders did away with a consultant-driven model proposed underHouse Bill 61 – School finance recalibration that had been discussed for months in the interim. Instead, lawmakers advanced their own reductions in spending. The departure from a consultant-based approach may set the table for  a challenge in Wyoming Supreme Court. That court’s precedent-setting decisions 30 years ago have largely dictated the state’s K-12 funding model in the decades since.

In his State of the State address to the Legislature in early March, Gordon said Wyoming has relied for years on a funding model that is no longer sustainable and needs reexamination.

“How we get there, and how we afford it, is a question that is now before us,” Gordon said. “The handwriting is on the wall. The can we kick down the road every year is broken. We have to deal with this issue.”

But that didn’t happen.

After days of negotiations, talks between the House and Senate on the state’s education funding bill – House Bill 173 – School finance funding-2 – fell apart in dramatic fashion during the session’s final hours.

The rift was a familiar one for long-time observers of the Legislature: While the Senate desired deeper cuts and greater savings, the House built its proposal on new (and tightly regulated) federal funding to backfill some of the Senate’s proposed cuts as well as a conditional, half-cent sales tax increase.

Ultimately, the House’s requests, and its unwillingness to concede, created a piece of legislation Senate Education Committee Chairman Charlie Scott (R-Casper) said would make the bill unpassable in his chamber.

“The fundamental point, Mr. President, was that they wanted to keep on spending forever,” a visibly frustrated Scott said on the Senate floor late in the final day of session. “We were frankly negotiating with a set of … classic tax and spend liberals that think that they can just tax forever, and that you never have to rein government in a bit…”

Though lawmakers have been meeting in an adapted session format since January, long-debated issues  went another year without meaningful resolution.

Facing an upcoming “fiscal cliff” in the state’s education funding that has prompted tens of millions of dollars in cuts over the past decade, lawmakers have remained consistently at odds over how to address the problem without causing substantial damage to the state’s smallest districts. Gordon’s yet-to-be defined plan is now the only one standing.

Recent converts to Medicaid expansion in the House, like former House Speaker Steve Harshman (R-Casper), did little to move their colleagues in the Senate. Members of the House Revenue Committee have no alternative but to study expansion again in the interim as an estimated 24,000 residents remain uninsured and hospitals continue to eat $100 million in uncompensated care each year.

And despite more than $1 billion in federal aid coming to Wyoming in the coming months, lawmakers will still need to grapple with the repercussions of a budget that supports fewer services than it did a decade ago. Gordon and his aides have long-warned his administration’s reductions will have impacts beyond of Cheyenne.

But cutting deeper would require politically unpopular reductions to services during a time of economic crisis. As of February, the three-month rolling average of Wyoming’s Economic Health Index — an economic performance score set by the state — still hovered at levels not seen since the Great Recession.

The alternative, tax increases, would be at least as politically perilous. Many freshman lawmakers signed pledges against news taxes while campaigning.

“The Senate came fully anticipating to make a cut of another $100 million out of my budget, and they were not able to do that,” Gordon told reporters last Thursday, before adding that more cuts might be on the horizon. “ … I think I’ve demonstrated the courage to make those cuts, whereas the Legislature may have to really think carefully about what it does.”

“The federal money is not going to just automatically backfill those programs,” Gordon’s policy director, Renny Mackay, told WyoFile last week. “The budget shortfall that we’re facing right now is over the long term. So the governor is not supportive of just saying, ‘let’s take that federal money and just offset cuts for the next two years,’ because then we would just be back here in two years [dealing with the same problems].

“Our budget shortfall will not [disappear] with COVID,” he added.

If not now, then when?

During session, members of the 66th Legislature did identify a handful of solutions to resolve some of the planned reductions in Gordon’s recommended budget. They raised the cost of death certificates by $5 to help fund an indigent burial program Gordon proposed cutting. They introduced numerous new fees — such as on healthcare licenses — to fund some critical agency functions on the chopping block. They also ratified additional fees to fund the replacement for Wyoming Department of Transportation’s near-obsolete record-keeping system through House Bill 254 – Transportation Computing System.

However, the crux of Wyoming’s budget woes — a dearth of non-mineral revenues — remains unresolved, even as coal continues to decline, oil and gas revenues fluctuate wildly and Wyoming’s population remains stagnant while the cost of government grows with inflation. Numerous efforts to raise broad-based taxes this year failed, often without a hearing. Longstanding proposals like increases to the fuel and tobacco tax were not heard on the floor despite passing their respective committees.

House lawmakers defeated a proposal to backfill Gordon-proposed cuts to a Wyoming Department of Corrections program. Lawmakers feared that the fee increases to cover the program could have punitive impact on the recently incarcerated who may struggle to afford them.

Even an effort Gordon supported — a Rep. Cathy Connolly (D-Laramie) proposed repeal of the state’s tax exemptions on various goods and services — failed to get assigned to a committee.

The inability to fund government has led to the creation of a budget that will likely have ripple effects statewide, Gordon said, particularly given the high degree of government employment — and the private sector’s reliance on government spending — in the state.

“I don’t think people understand these are not government jobs that are getting cut at that point,” Gordon said. “They are private enterprises that serve these populations. And that takes money out of those communities. That takes money out of circulation that’s going to be used on main street. The cuts that we did this last year were more devastating than just getting rid of government.”

County and municipal governments have also been hit. As of December, year over year, Wyoming lost nearly 2,500 government jobs, according to estimates by A&I released last month. Gordon’s state government cuts represent a fraction of that total, according to Renny McKay, policy advisor to Gordon .

With an election in 2022 — and with tourist season and more than $1 billion in federal dollars coming — a question remains if the Legislature can, or will, change course.

During Thursday’s press conference, Gordon walked through the numerous times Wyoming’s fiscal woes had been resolved by “serendipitous” occurrences of money arriving just in time for the state to make ends meet. The American Rescue Plan, he said, is one of those occurrences.

Discussions on how the ARP money can be used will likely take place in a special session happening in July, Senate President Dan Dockstader (R-Afton) said, when the contents of the legislation are better understood.

As of right now, lawmakers, and Gordon, are considering a long-term approach to spending those dollars, focusing on what Dockstader described as “legacy projects” that benefit Wyomingites years down the road.

“From my view, maybe we patch some holes and things we had to deal with in this current budget, and fix those things,” House Speaker Eric Barlow (R-Gillette) told Wyoming PBS’ Craig Blumenshine in a March 6 interview, adding that he hopes lawmakers focus on “multi-generational” issues.

But the time to find a sustainable solution for Wyoming’s ongoing budget woes, Gordon said, is running short.

“In this case, with the ARP funds… I really hope [legislators] don’t put off the substantial conversations that have to take place today or tomorrow and the next day to build that sustainable future,” he told reporters.