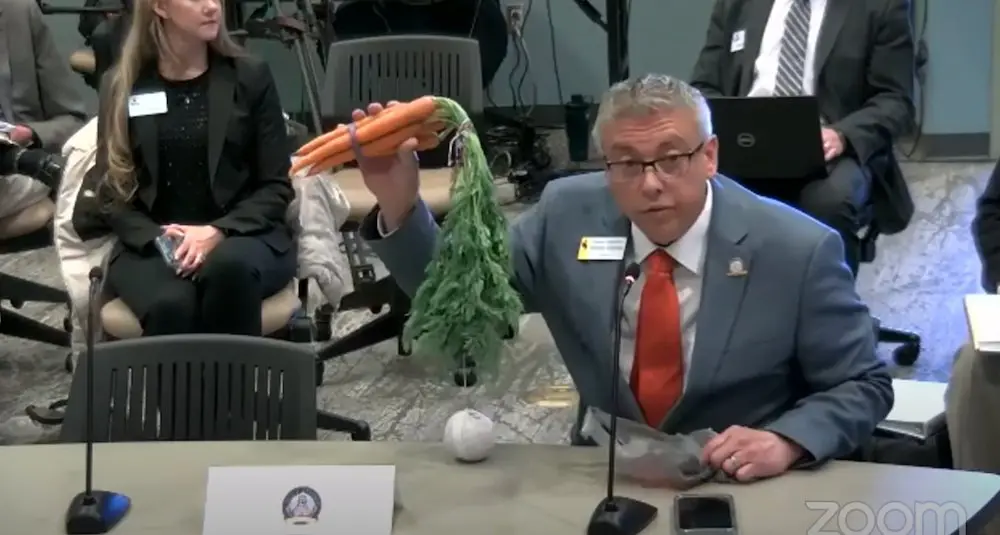 The Legislature’s Joint Revenue Committee voted to revive Medicaid expansion Tuesday afternoon, setting it up for yet another hearing in Cheyenne.

If adopted by the full Legislature, the bill would take advantage of $120 million in new funding over the next two years from the Biden Administration to establish the program, and provide insurance to an estimated 24,000 individuals in Wyoming who lack it.

One woman told of losing her healthcare after being laid-off from her job. Another woman speaking on behalf of a quadriplegic friend said she had to sell a trailer to pay medical bills. There was also vocal opposition to the measure.

But alongside concerns of socialized medicine and the potential for fraud were arguments that were refuted by medical experts and in some cases, their own sources.

“It is disappointing to me, as a longtime member of this Legislature, to hear so many falsehoods from the same people over and over,” Sen. Cale Case (R-Lander), one of the committee co-chairs, said before the vote. I’ve never experienced anything like this. I guess it’s a sign of our times. If you read the same thing off the internet over and over 500 times, it doesn’t necessarily make it true.”

Here are several of the disproven, yet still prominent, anti-expansion talking points, dissected.

In the 2021 legislative session, opponents of Medicaid expansion often cited the experience of states like Utah, Montana and Indiana to demonstrate the policy could be costly for Wyoming, which is currently in a structural deficit.

That narrative persisted into Tuesday’s hearings. In testimony against the bill, Rep. Robert Wharff (R-Evanston) said Medicaid has become the “biggest issue” in Utah’s budget since it opted to expand in 2019 and implemented the program in 2020. Uinta County GOP official Karl Allred argued that Indiana’s Medicaid program had contributed to larger fiscal woes there, while others cited Montana’s experience as a cautionary tale for Wyoming.

Some have expressed concern that once federal incentives from the American Rescue Plan disappear after the program’s first two years, Wyoming will be unable to pay its 45% share of the program without Congressional action.

But those characterizations of other expansion states don’t match up with their experiences, according to state officials and documents.

While Wyoming experienced significant budget cuts in the wake of the COVID-19 pandemic, Utah actually experienced a budget surplus, which it used to increase spending to the state’s education system and its Medicaid program. Though Utah has increased the amount of spending it puts into the program, the increase in federal dollars — according to Utah’s 2021 state budget — has been substantially higher.

“…[T]he benefit that it’s giving to us outweighs that cost and we’re very happy overall to continue the program,” Utah Republican lawmaker Dr. Raymond Ward told the Star-Tribune in March. “And that’s what we’re doing in Utah and no one is saying, ‘This has ruined us, we’re going back.’”

Groups like the conservative-leaning Oklahoma Council of Public Affairs have argued Medicaid expansion led to significant cost overruns in Indiana even before the COVID-19 crisis, and when the pandemic hit, the state’s obligation ticked upward. Even so, Medicaid reserves were later used to help balance the budget during the pandemic.

Other considerations make Indiana’s situation unique. When former-Gov. Mike Pence implemented Indiana’s Medicaid program in 2015, it came with a number of strict work requirements federal regulators said hindered the program’s success. Indiana also rejected plans to leverage an influx of federal dollars from expansion to reform health-care delivery and payment systems with providers. The Wyoming Hospital Association’s Eric Boley argued Indiana’s hospital system is in better financial shape than Wyoming’s, and that it was an imperfect comparison.

Looking broadly, however, Indiana’s budget impacts were negligible, due largely to the state Legislature finding a means to finance it: Tobacco taxes.

“[Indiana’s] program had no substantial impact on the state budget or General Fund because the state share was funded through the cigarette tax and hospital provider tax that was increased from 4.5 percent to 5.5 percent, calculated to cover the new costs,” a 2020 policy paper by Health Management Associates, a Denver consulting firm, reads.

Adam Searing, a Georgetown University professor who specializes in Medicaid research, said that nationally, there is little proof to support Medicaid has ruined state budgets if they have a means to pay for it.

“I’m not trying to minimize that the state has got to come up with the state share,” he said. “The primary job of the state Legislature is to make priorities for the state and allocate the state budget. So I think it’s absolutely something that they should look at. But the idea that Medicaid expansion is destroying budgets is simply not correct.”

Many testifying against the bill argued that Medicaid expansion — due to the program’s low reimbursement rates — caused hospitals to see decreased profit margins and long waiting lines caused by increasing numbers of Medicaid patients seeking care.

Rep. Chuck Gray (R-Casper) cited those reasons in his decision to vote against the bill as well as research by the Foundation for Government Accountability, a right-leaning Florida think tank that has long-opposed Wyoming’s Medicaid expansion. Some researchers and public officials, including Searing, have questioned the veracity of the group’s research, with Searing noting the group often relies on outdated research and citations and lacks peer review or objective sources.

A March policy brief by Healthy Wyoming, a coalition of nonprofit groups that support expansion, said the think tank’s analysis has been called “bogus” and “highly misleading” by trusted sources. “There’s no reason they should have a say in what happens in Wyoming” it read.

Cassie Craven, a lobbyist for the free-market think tank the Wyoming Liberty Group, argued hospitals in Montana saw a 40% drop in profit due to cost shifting from private to public insurance. That happened when new enrollees arrived, Craven said, citing articles by Becker’s Hospital Review and the Great Falls Tribune.

While the profit margin decrease is accurate, both sources noted that overall, hospital revenues actually increased and health outcomes improved. A February report by the Montana Healthcare Foundation found that Medicaid expansion has prevented new hospital closures since its 2015 implementation and increased the number of individuals seeking care. Since then, the situation has only improved.

“Expansion has resulted in a 48% reduction in the uninsured in our state and has helped stabilize health insurance rates by reducing any cost shift to the insured,” Rich Rasmussen, the current president and CEO of the Montana Hospital Association, wrote in a policy brief to Wyoming lawmakers. His brief intended to address “false or misleading statements” made by state lawmakers about expansion there.

In his testimony to lawmakers Tuesday, Boley said that while Medicaid is not the best payer for healthcare providers, “it still pays,” and could help make a significant dent in the estimated $120 million in uncompensated care hospitals eat every year. That would provide greater certainty for rural hospitals and ambulance services that are already under stress, Boley said. Both the Wyoming Hospital Association and the Wyoming Medical Society support expansion.

“We don’t have unanimous consent on anything, but we do hold this as a firm position,” Sheila Bush, executive director of the Wyoming Medical Society, said.

Jimmy Dee Lees of the Sheridan County League of Republican Women said expansion could lead to a “poor self-esteem cycle” and discourage people from working. Sheila Rambur, a business owner, said one of her employees didn’t want to make more money because she would lose her Medicaid. Others, like Wharff, shared their own experiences in being uninsured, and said the federal government doesn’t need to pick up the tab when citizens can take care of one another.

“We’d had half a dozen fundraisers on behalf of my family,” Wharff told committee members. “And I can tell you people rallied around us in our community. One of my biggest concerns is … the things we used to do as a nation will contract, and they will go away.”

If healthcare is given away, he said, “you’re not going to appreciate it as much as if you worked for it.”

Though the COVID-19 pandemic increased the number of jobless persons seeking Medicaid benefits in other expansion states, pre-pandemic data shows a majority of Medicaid recipients were already working while receiving benefits.

“Prior to the ACA, many people with disabilities were required to live in poverty to maintain their Medicaid eligibility,” a 2017 article in the American Journal of Public Health read. “With Medicaid expansion, they can now enter the workforce, increase earnings, and maintain coverage.”

Several who testified cited data from other states showing a stark increase in elective abortions following the implementation of Medicaid expansion. Alaska saw abortions increase by 25%, Wapiti resident Nina Webber said, while studies out of states like Oregon have demonstrated similar increases.

Currently, Medicaid expansion is subject to laws established under the Hyde Amendment, a 1980 federal law barring the use of federal funds to pay for abortion except to save the life of the expectant mother, or if the pregnancy arises from incest or rape. States can elect to cover abortions using their state share, which both Alaska and Oregon have chosen to do, while others — like Wyoming — could elect not to.

However, others noted the U.S. Congress could soon consider legislation to repeal the Hyde Amendment, which they said could result in Wyoming being forced to cover the cost of those procedures.

But Wyoming also has statutes preventing taxpayer funds from being used for abortions. Medicaid is an optional program and, if the state disagrees with the terms, it can leave at any time, Case said.

“This is not the obstacle to implementing Medicaid some would like us to believe,” he told committee members.

Opponents of the bill like Rep. Mark Jennings (R-Sheridan) said they have not been given alternatives to Medicaid expansion and the Legislature has failed to vet other options. “Just because we don’t believe this is the right vehicle doesn’t mean opponents don’t care about the people, about Wyoming,” he said.

Wyoming has considered alternatives. Before the implementation of the Affordable Care Act, Wyoming created the “Healthy Frontiers” program, a means to offer health insurance to low-income individuals who lacked it. Five years later, the Legislature gutted the program.

Several years later, Republican Gov. Matt Mead proposed his own alternative to pure expansion, similar to that seen under Gov. Pence in Indiana. That, too, failed to gain traction. After Mead left office, his successor, Gov. Mark Gordon, touted a “Wyoming approach” to healthcare that remains uncompleted.

Instead of expansion, groups like Florida’s FGA recommended alternatives like offering telehealth services across state lines and programs like Farm Bureau Plans, which a lobbyist for the FGA said offers robust benefits at lower rates. However, analyses by groups like the Brookings Institution have argued those plans often fail to meet the standards of public plans, and have little regulatory oversight.