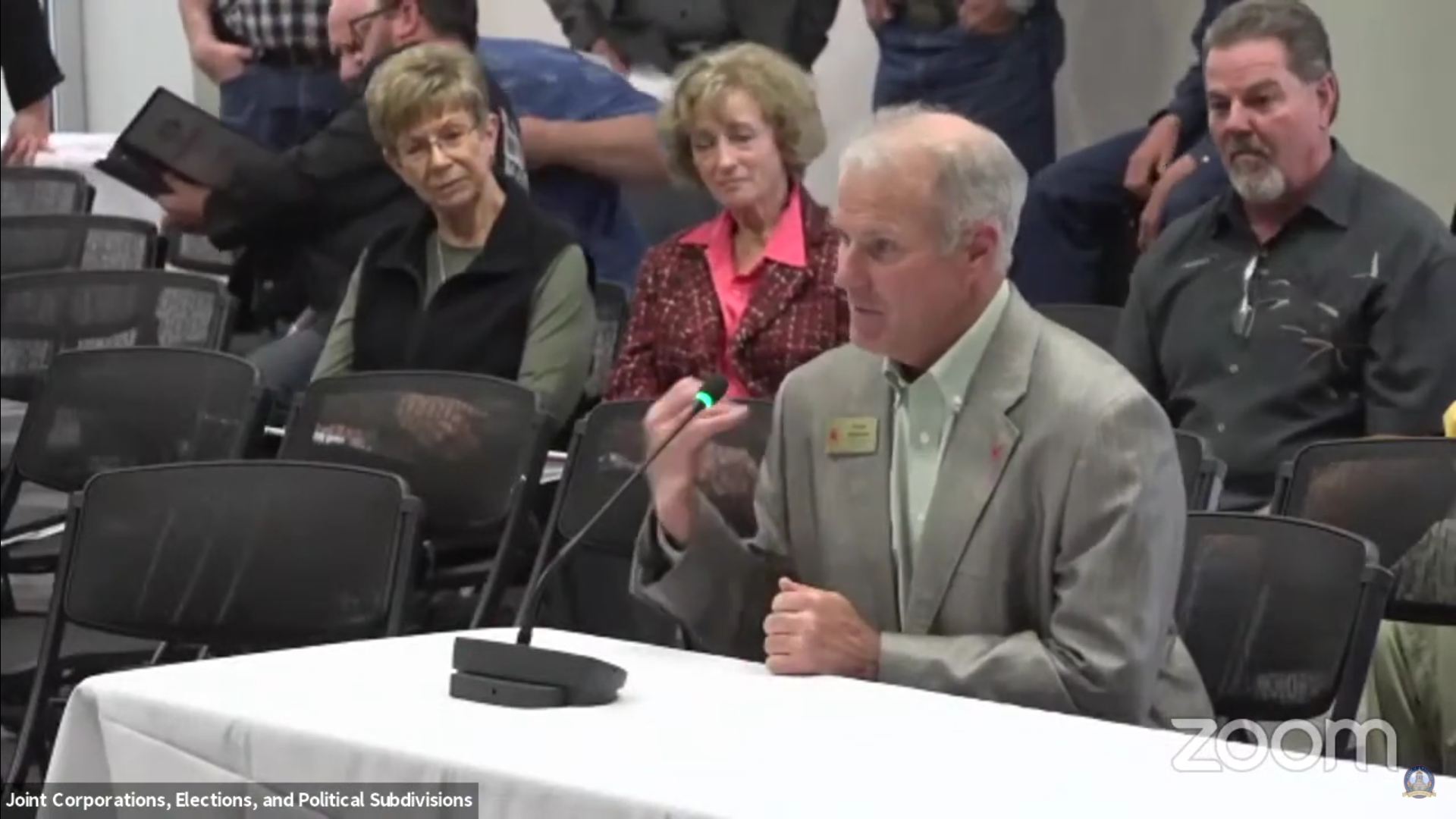 CASPER, Wyo. — Former Wyoming legislator Bruce Burns, who said he has been a member of the Republican Party for 42 years, chastised Wyoming Republican Party leadership on Thursday for what he perceived as an attempt to intimidate state legislators.

Burns’s comments came during the legislature’s Joint Corporations, Elections & Political Subdivisions meeting on Thursday when they were discussing a proposal to create a runoff system for primary elections in Wyoming.

Burns’ comments came after Wyoming GOP Chair Frank Eathorne urged the committee to approve the draft runoff elections legislation for introduction in the full legislature during the upcoming 2022 Budget Session.

Eathorne said that he was speaking “on behalf of Republicans all over Wyoming” saying that runoff elections “is the number one” thing they would like to see be done in terms of reforming Wyoming’s election system.

“They truly want to see majority elections results,” Eathorne said. A runoff election under the draft would be held if a candidate in a primary election did not receive a majority of the vote. The top two vote getters would go head to head in a runoff under such circumstances.

Eathorne, without citing any data on the percentage of Wyoming Republicans who support runoff elections, said that the party hears support for runoff elections “nonstop, daily from all of our means.”

He said the party is watching the way legislators vote on concept at all points in the legislative process, saying that Republicans are asking the party to track which elected officials are supporting runoff elections.

“We are going to look at all the different methods of measuring and evaluating votes,” Eathorne said.

Burns, who served eight years in the Wyoming House of Representatives and 16 years in the Senate, said the he thinks legislators should vote their conscience on runoff elections and no matter which way they vote, they shouldn’t be swayed by pressure from Wyoming Republican Party leadership.

“I get concerned when I see a chairman of the GOP sit up here and tell you they are going to take names,” Burns said. “Any legislator who is craven enough to change their vote because of intimidation tactics doesn’t deserve to be re-elected. And frankly, I’m very concerned when the leadership of the Republican Party threatens legislators and I don’t like it.”

Rep. Jim Roscoe (Lincoln, Sublette, Teton), the lone Independent in the Wyoming Legislature, said his status as an Independent made him feel like it was safe to speak on the issue.

He said that in his district he has spoken with Republicans and while some are in favor of runoff elections, others are not and he has not gotten the sense that there is clear, overwhelming support among Republican voters for runoff elections.

Duncan said she would be in favor of keeping the draft runoff elections bill alive in order to allow further debate on the issue.

Following Burns’ comments, Eathorne returned to make another statement to the committee. While the committee doesn’t typically allow people to speak more than once on an issue during a meeting, Committee Chair Sen. Ogden Driskill (Crook, Campbell, Weston) allowed him to speak again.

“I am the messenger and I was relating a message about what folks are asking the party about voting about issues,” Eathorne said. “That’s my statement.”

Committee Vice Chair Rep. Dan Zwonitzer (Laramie County) asked Eathorne if he could clarify why Wyoming Republican Party leadership think they are speaking on behalf of “grassroots” Republicans, a term Eathorne used in regard to not only the runoff elections proposal, but also open primary and ranked choice voting proposals the committee discussed on Thursday.

“We are the elected Republicans of our state for each one of our districts,” Zwonitzer said, suggesting that the Wyoming Republican Party doesn’t have the only access to what Republican voters think.

“I keep hearing from the party this is what the grassroots wants,” Zwonitzer said. “Obviously, we all have constituents, right? We’re talking to our own people as well.”

Zwonitzer said that Wyoming has the “most Republican legislature in the country.”

“Why doesn’t the state Republican Party have the philosophy that we work with the legislature and listen to the people [voters] elect?” Zwoniter asked.

Eathorne told Zwonitzer he has “pondered many of the same questions that you are posing.”

The runoff election system being proposed for Wyoming would apply to gubernatorial, secretary of state, state treasurer, state auditor, state superintendent of public instruction and any federal office primary elections. It would also apply to state legislative primary races.

In order for the legislation to be possible, Wyoming voters would also need to pass an amendment to the Wyoming Constitution to change the date that the legislature is required to reapportion its membership based on the U.S. Census.

That would be needed in order to accommodate the timing of the proposed new primary and runoff election structure.

The proposed legislation would not be put into effect until the 2024 election cycle. If the proposal becomes law (if the legislature passes the runoff election bill and Wyoming voters were to adopt the change to the Wyoming Constitution), primary elections would be held on the first Monday in May.

Runoff elections would be held on the first Tuesday after the second Monday in August. Voters switching parties after a primary would not be allowed to participate in the runoffs.

Rep. Chip Neiman (Crook, Weston) working with the Secretary of State’s Office, the Legislative Service Office and county clerks to formulate the structure of the proposed legislation.

He told the Joint Corporations, Elections & Political Subdivisions Committee on Thursday that he would be happy to see the committee take on his bill as a committee bill.

Neiman worked on the draft legislation after the Wyoming Senate defeated a similar proposal on a 14-15 vote during the 2021 General Session.

“This is a very much heavily desired piece of legislation,” he told the committee, adding that the collaborative effort that went into drafting the bill aimed to ensure that the runoff elections would not disenfranchise any voters and would be done in a way that is feasible for state and county election officials to conduct.

Duncan asked what the bill would mean in terms of the deadline for candidates to file to run in primary elections. It would require candidates to file no earlier than 90 days and no later that 80 days ahead of the primaries. That would put the filing period in February around the time the Wyoming Legislature’s budget sessions get underway.

“The biggest concern I have for this bill is the military,” Duncan said, saying she wanted to be sure service members could participate in the runoff elections.

Neiman said accommodating military personnel absentee ballots was one reason the runoff elections wouldn’t be held until three months after the primaries. That would ensure the ability to mail out ballots to service members and others voting absentee.

Duncan asked whether there would be a possibility to implement an instant runoff system specifically for military voters, saying she had concerns about voter fatigue.

Policy Analyst Jennifer Martinez with the Secretary of State’s Office said that there are states that conduct instant runoff but that this is done in states which implement ranked choice voting. The Joint Corporations, Elections & Political Subdivisions shot down a proposed ranked choice voting bill on Thursday.

Wyoming Secretary of State Ed Buchanan said that it could still be theoretically possible for the state to implement limited instant runoffs but that this would come with similar costs to implementing ranked choice voting.

Buchanan said that the proposed runoff election system would cost the state about $230,000 to implement plus about $30,000 for the additional absentee ballots that would be needed during runoff elections.

He added that county clerks report that primary elections cost about $1.1 million across the state and that a similar amount would be needed any time a runoff election is held.

Buchanan said that runoff elections would likely be common and that there would have been a runoff in five of the past six primary elections if the system were in place.

“It will be utilized,” he said.

Neiman said that the primary reason for this was to be fair and “ensure everyone is held to same accountability.”

Scott said he had concerns that voter turnout could drop significantly between primary elections and runoffs and that this could decrease public confidence in the results of runoffs.

Buchanan said that while the Secretary of State’s Office doesn’t have specific data on what voter turnout numbers would look like under the proposed system, anecdotal examples suggest it would tend to be lower in the primaries unless there is a particularly “exciting” race on the ballot.

“Why don’t more states have this?” Nethercott asked.

She said that only four states have runoff election systems similar to what is being proposed for Wyoming: Arkansas, Georgia, Oklahoma and Texas.

Nethercott said that she thinks the legislature should consider passing the resolution to put the constitutional amendment question on the ballot and let voters decide for themselves whether the state should have runoff elections.

Burns also said in his comments that he thought putting the concept before voters would make it clear how Wyomingites feel about runoff elections.

Gail Symons with Civics 307 said that she has concerns about moving the primary elections up to the first week of May and moving the filing deadline to the time when the legislature is in session.

“You don’t think I can be a decent legislator for six weeks and campaign for re-election at the same time?” Zwonitzer asked.

Symons replied: “My personal opinion is there are some who cannot whether there is a filing period or not.”

Rep. Pat Sweeney (Natrona), who is not a member of the committee, told members he is opposed to the runoff election proposal. He said it would increase the costs of campaigning for office.

Others expressed concern about voter fatigue in holding another election and the way the system could stretch out political campaigning over a longer period of time.

Scott said that runoff election systems have historically been used in states where one political party was overwhelmingly predominant.

Scott said that runoffs were typically held several weeks after a primary due to the problem with lower voter turnout if held too far apart.

However, he noted that the federal government has implemented restrictions forcing a bigger gap between primary and runoff elections in order to ensure absentee voters are able to participate.

While Scott said he thinks it is a good concept to try to ensure absentee voters can participate, the practical effect of such concerns make him think runoff elections are unfeasible due to his concerns about lower voter turnout if the runoff comes too late after a primary.

The committee voted (by a show of hands) to continue discussing the runoff election proposal as a committee bill at its next meeting.